The overwhelming wealth of restaurant options in Montreal is one of the inspirations behind Amie Watson’s new app FeedMe, a food destination discovery program modelled after Tinder.

In the course of trying to decide where to grab anything from coffee to tacos, it’s easy enough to google what the “best” is and then internally argue over what to try. But after logging on to FeedMe, users are shown profiles of restaurants based on what’s closest to them and any preference they punch in, and the info you’re seeing is based on either Watson’s own reviews — differentiated by her personal write-ups and a rating scale based on five M’s instead of stars — or Yelp-sourced ratings, photos and reviews. After that, it’s swiping right or left until you find the most intriguing fit. 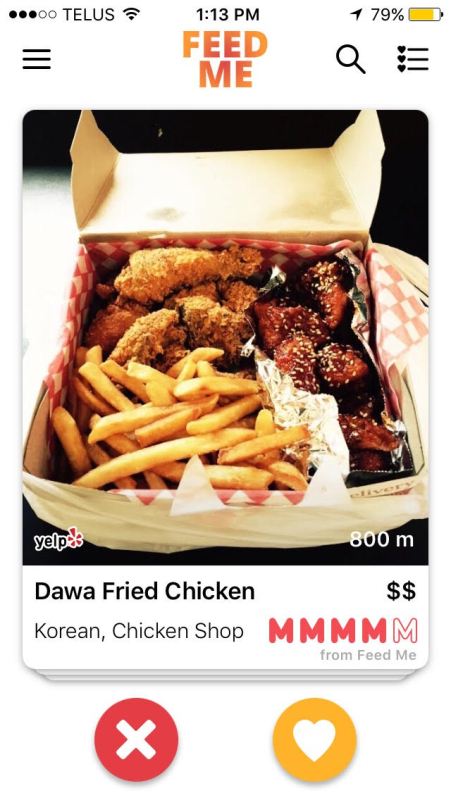 Launched at the beginning of August after four years of development, the app is now live in over 30 countries, with 12,000 downloads in the past month, according to Watson.

Thing is, FeedMe has a particular leaning towards Montreal because Watson has been blogging about food here for the past six years on her personal site Multiculturiosity. Having culled through thousands of user-generated opinions on sites like OpenTable, TripAdvisor and Google, she’s sought to make the most measured assessment of what’s worth your dollar, offering a more curatorial approach than a site like GrubHub would.

“When I write my own reviews, I’ve done the research,” Watson tells me, noting that she wouldn’t stop at one Yelper’s opinion. “If someone writes a review of a place that it has the worst service ever, you’d assume the service is awful. But I’ve read them all.”

Currently, Watson’s personal input on the app numbers in at over 1,500 listings and counting, condensed synopses of larger reviews she’s written. Admittedly, the reviewer has her own biases, having her own preferences and restrictions such as gluten-free pastries or ensuring that a sushi joint’s fish is sustainably sourced. More than simply saying she just doesn’t like something, Watson backs it up.

The result is a streamlined version of the Yelp app. While the food review site’s information and logo is prominent in FeedMe, the focus is on turning your phone into a concierge with endless suggestions, and less on going by the cumulative star ratings and comments.

“What I wanted is a simple, visual experience. It’s a nice mix between content created by businesses and users,” she notes.

Sourcing from Yelp simply gives a wider breadth of selections to choose from. “The app isn’t aimed only at fine dining. One of the thing I wanted to make sure of is that it isn’t just Toqué! And Europea and Maison Boulud — it’s bakeries, little coffee shops, cafés… even Tim Hortons pops up. It’s in (Yelp’s) food categories and someone wrote a review, so it shows up.” A key similarity to Tinder is that you’re not guaranteed to find something you like on the first try, so just keep swiping.

FeedMe plans to eventually produce its own user-generated information and make it possible for people to pass their own judgement. “We wanted it to be bare bones at the beginning and see what we wanted to add as we went along,” Watson explains, encouraging all users to send emails and suggestions as the program gains traction. ■

Search for “Feed Me Restaurant Swipe App.” All questions and queries to info@feedmeapp.ca