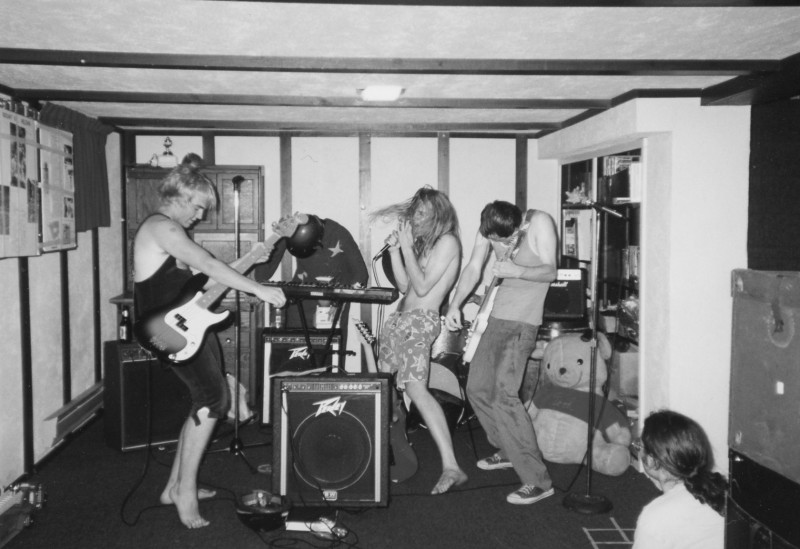 Permanent Stains were formed in 1987 by a group of prepubescent pals in Ottawa. Loosely defined at the time as a homoerotic art-punk band, their “Weird Al” Yankovic-inspired antics evoked both delight and disgust.

Peaches, a member for three years, recalls of her time in the band: “I got no action before, during or after the shows! Nobody offered me drugs, parties or chicks. I mean that’s why I joined and none of that shit ever happened.”

This balance of individual excitement, hype and energy defines the Permanent Stains project: it is something to experience, to witness, but that is unpredictable. You may have fun, be disappointed or surprised, but you will definitely be challenged.

The group predates Jackass and the advent of fail-vids by decades. Part of me sought to define the primal attraction to gonzo punk-rock performance art, but I quickly realized this is antithetical to the entirety of the project. It defies expectation.

For now we’re celebrating the Permanent Stains’ 30th anniversary. And while there are no definite plans for future reunions, something about the project leads me to believe the group will re-materialize for their 40th and 50th, and fearlessly attack/integrate every challenge that may come with their 60th and 70th.

I spoke with founding members Malcolm Fraser (a Cult MTL columnist, for the sake of full disclosure) and Adam Traynor about legacy, parental involvement and expectation.

Natalia Yanchak: How legendary was the band 30 years ago?

Malcolm Fraser: For sure, anyone who was part of the Ottawa punk scene in the early ’90s would remember us, if not necessarily fondly. But we were always highly legendary in our own minds.

Adam Traynor: Well one of the first things we did as 13-year-olds was record an audio press kit “documenting” the band’s internal tensions, break-ups and reunions, because at that point, role-playing was far more important to us than actual music (this at a time when most of our songs were covers or parodies we’d discovered thanks to The Dr Demento Show). But self-mythologizing only graduates to actual legend through a foundational act of transgression. Our origin story begins in earnest when the bedroom-cassette nerds discover punk. They shamelessly lie their way onstage at the wildly inappropriate venue of a high school coffee house, where the indescribable rush of excitement and panic that grips the audience comes to be known as brainstaining. Some flee, literally fearing for their lives when fluids, bodily and other, flow freely from stage to audience and through dangerously exposed electrical wires.

NY: How important were your parents in the formation of the group? I read about your mom, Barbara, wrangling dry ice into buckets and lending you small kitchen appliances to use at your shows, without thinking twice.

MF: I’d say really important. They got my brother and me the instruments as Christmas presents that transformed the band from a hypothetical concept into a somewhat real endeavour. Today, we’re an example of what happens when you encourage your kids to be creative — be careful what you wish for.

AT: No question, material support from parents was a big help at the beginning. For one early show, Yogurt Boy’s mother made enough mashed potatoes for a Close Encounters-sized volcano on stage, into which YB poured lava made of blended hot dogs and orange juice. 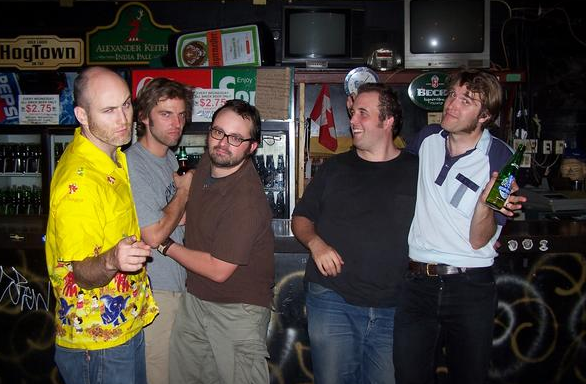 NY: Do you consider this project a documentary or an artifact? Is a performance by the Permanent Stains an experience rather than something permanent?

MF: As the great philosopher Steve Miller once said, time keeps on slipping into the future.

NY: What has driven the band to reassemble now?

MF: For me, it was the realization that we hadn’t done anything whatsoever since the 20th anniversary tour (pictured). We took 10 years off without even meaning to. Time goes so fast; I just thought we’d better do something or another decade could go by without us noticing.

NY: Should the audience expect an equally fervent/passionate show in Montreal, as say, previous events that saw you writhing in fish juice?

MF: Yes, definitely. The only question is whether the energy will be channelled strictly into a musical context, or if we’ll feel compelled to live up to our reputation for sordid theatrics.

NY: What are the future plans for the Permanent Stains?

MF: Because we live all over the world and all have our own careers and so on, it’s very challenging for us to organize stuff. My next goal is to do some more recording, but after spending an intensive week together we may hate each other enough to necessitate another long break.

NY: Does anybody really know why the Permanent Stains exist and/or persist?

MF: I always had a secret dream of being the longest-lasting band of all time.

AT: A stain comes into existence when something finds itself in the “wrong” place. When they nevertheless persist, they become permanent. ■