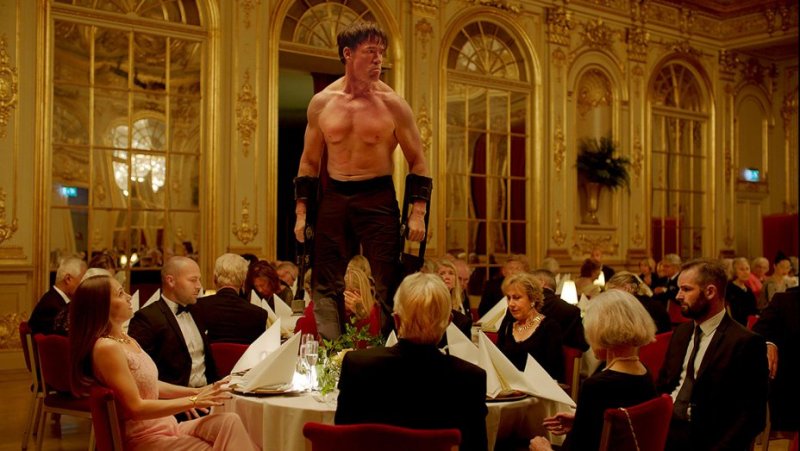 (UPDATE: The Square went on to win the festival’s Palme d’Or prize, while 120 Battements par minute won the Grand Prix.)

A cleaning man at a museum sweeps up part of an art installation consisting of several gravel mounds and a sign that reads “You Have Nothing.” Instead of informing the artist, curators opt to rebuild it from the sack of the trashed gravel. This scene from Cannes competition entry The Square mocks the pretensions of contemporary political art. 120 Battements par minute, also in competition, portrays the actual political struggles of AIDS activists. The theme of responsibility towards others is central to both.

The Square is the best film I’ve seen at Cannes so far, a deadpan send-up of bourgeois selfishness. It expands on Swedish director Ruben Ostlund’s Force Majeure, a Jury Prize winner at Cannes in 2014, where a family falls apart when a man makes a cowardly and selfish mistake. The Square expands this premise to the entire contemporary art scene.

Self-assured and well-dressed Christian Nielsen (Claes Bang, of the Scandinavian TV series The Bridge) is the head curator at the X-Royal Museum–the actual Royal Palace in Stockholm serves as the exterior. He practises a speech on the need for altruism in contemporary society, to unveil his new exhibit, “The Square,” a 4-by-4 metre LED rectangle on the pavement, marked by a plaque as “a sanctuary of trust and care” where anyone can count on the help of others. (It recreates an actual installation Ostlund created with producer Kalle Boman in 2014.)

But Christian’s altruism is just a facade. When an American journalist Anne (Elisabeth Moss) inquires about the meaning of his curatorial descriptions from the museum website (“a non-exhibit exhibit” is one phrase she mentions) we can tell from Christian’s awkward pause that he himself is not quite sure what that means. Tightly wound Anne later meets Christian at a party and the two have a one-night-stand at her apartment, leading to another telling meditation on trust–a tug-of-war over a used condom. Anne’s roommate, an ape who draws, reinforces the film’s central point that in the end, cultivated upper-class people are all just savages.

Christian’s altruism crumbles when con artists swipe his phone and wallet. To get it back, he traces his phone to a building in an immigrant neighbourhood and sends every resident threatening letters. The thieves return his stuff. But then a boy from the building starts following him around asking for an apology–his parents now think he is a thief.

Unable to admit his error, Christian lets his interactions with the boy, his relationship to his two young daughters and his curating job to spin out of control. Distracted, he approves a disastrous publicity campaign for the show by two YouTube-era hipster admen. By the time Christian repents, it’s too late.

The film mocks with sociological precision. Scene after scene reveals the conformist behaviour of the privileged class. At a museum banquet, upon seeing an incoming crowd dashing to the food, invited guests do the same, abandoning the chef in the middle of describing the menu. During the “Ape man” participatory piece by a performance artist (Terry Notary, who did motion capture for Planet of the Apes), the donors in a lavish dining room start off as silent spectators but end up as a vengeful and violent mob. The Square is long (over two hours), and a bit meandering, but remains a consistently hilarious experience. 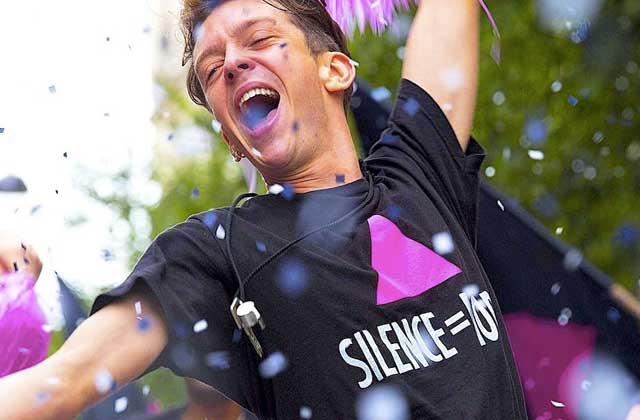 French film 120 Battements par minute explores altruism from the other side: the point of view of the oppressed. Moroccan-born French director Robin Campillo recreates his own recollections of Act Up-Paris at a time when François Mitterrand’s government ignored the AIDS epidemic and the gay community it ravaged. His docudrama has none of Ostlund’s playful irony, and is direct, almost ethnographic in style.

Act Up was founded in New York 1987 to advocate for HIV-AIDS patients with spectacular, media-savvy tactics, at a time when the Reagan administration pretended AIDS did not exist. The Paris organization, based on the U.S. group,  followed in 1989. 120 Battements par minute fills out the lesser-known French part of the story. At the outset, the film plunges the viewer into an Act Up meeting, where an organizer introduces newbies to the movement’s goals and tactics.

More of a panorama than a story, the film wins over with authentic details, such as the brutal side-effects for early medications, Pharma companies hogging new drugs, the recipe for fake blood to throw at government stooges and the fact that members snapped their fingers in approval instead of clapping so as not to take away valuable discussion time.

A favourite of French critics, 120 Battements par minute continues the tradition of French social problem film genre, represented at Cannes almost every year–consider La Loi du marché and La Tête Haute in 2015) and The Class in 2009 (Crampillon wrote the screenplay for the latter). The characters are compelling, the episodes are expertly scripted, the message is clear. What this drama lacks in flair and style, it makes up in historical significance, as a powerful primer on an important moment in the development of French AIDS activism. ■