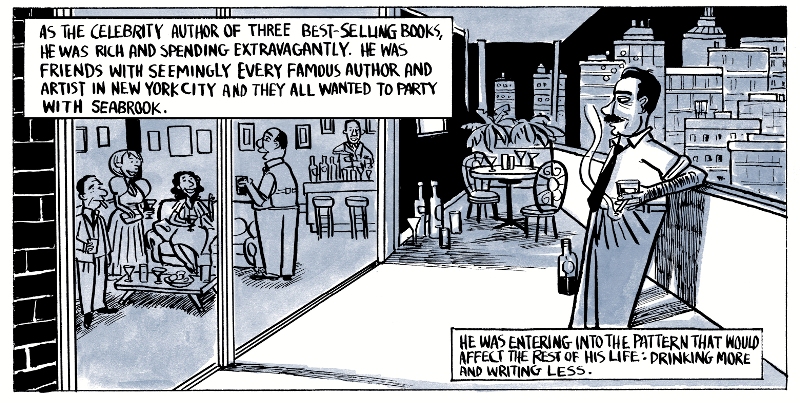 Most of us haven’t heard of William Seabrook. Born in 1884, he is an unsung player in the Lost Generation of American writers; his pals included Aldous Huxley, Gertrude Stein and satanist Aleister Crowley. Seabrook was a perpetually dissatisfied writer, despite having written several bestselling books, including 1929’s The Magic Island — in which he coined the term “zombie.” But it was never enough, and Seabrook eventually killed himself, obsessed with an inward perception of being a total failure.

Themes like cannibalism, bondage, unchecked alcoholism, blood-chugging and occultism, could give the term “graphic novel” a whole new meaning. Yet Hamilton-based illustrator and biographer Joe Ollmann propels the reader along the dark and depressing path that was Seabrook’s life with class and dignity. Ollmann was conscious of his power as the storyteller to drive the narrative, so we talked about his experience in creating and delving deep into the true legacy of The Abominable Mr. Seabrook.

Natalia Yanchak: How did it feel to invest a decade of your own life into researching another person’s life?

Joe Ollmann: It’s a big responsibility telling someone else’s life. There’s the pressure to be honest – and there’s a lot of salacious stuff to be honest about with Seabrook – and there’s also trying not to be one-sided and completely sullying the legacy of someone whom you haven’t even met. Fortunately, Seabrook was fairly open about himself in his writing. There’s also the obvious difficulty of facts. Fiction is easier to direct a narrative. With biography the only way to influence the narrative is by what you choose to accentuate, and what you leave out. And let’s not kid ourselves — every biographer does one or both of these.

NY: Which became the primary force: your power as illustrator and storyteller, or Seabrook’s actual story?

JO: The research was pretty fascinating at times, like spending a week going through the archive of Marjorie Worthington — his second wife — at the University of Oregon. That was numbered boxes and white gloves and taking notes and chuckling to myself holding letters from Aldous Huxley to Seabrook and Marjorie. After the research, the difficulty was to remain true to the facts, but to tell the story in an engaging fashion that wasn’t just a dry recitation. The drawing was hard and required a lot of visual research.

NY: What attracted you to Seabrook in the first place?

JO: I liked his writing at first, then became intrigued by the biographical details I found on him. His circle of famous friends, his extended stays in faraway places, and, yeah, the cannibal, bondage, alcoholic stuff as well. But the beginning was the quality of his writing, which seemed more polished and smarter than the often pulpy subjects he chose to write about. 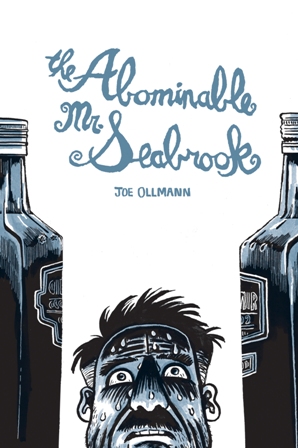 NY: What were some of the high moments of the process? You were invited to work with Night of the Living Dead director George A. Romero, weren’t you?

JO: I wish! No, I has hired by the publisher Dover to do covers and comics introductions to two reissues of Seabrook’s books which had previously all been long out of print. For the book The Magic Island, which is about Haiti and voodoo and zombies, Dover got George Romero to write a foreword to the edition, since Seabrook is credited with popularizing or initiating the use of the word zombie in English.

NY: There are a lot of very dark themes. What was the darkest thing that crossed your desk while writing this book?

JO: Without a doubt, the darkest thing in the life of William Seabrook is in his book Asylum, where he documents the cure of his alcoholism in Bloomindale Mental Hospital. At the conclusion of the book, he writes that he’s cured and now he can take a drink or two if he wants to and not need another. Alcoholism would plague his life and his family and ultimately end his career and his life. Seeing someone poised on that brink of sobriety or addiction and miscalculating the deadly effects was terribly sad to see. ■