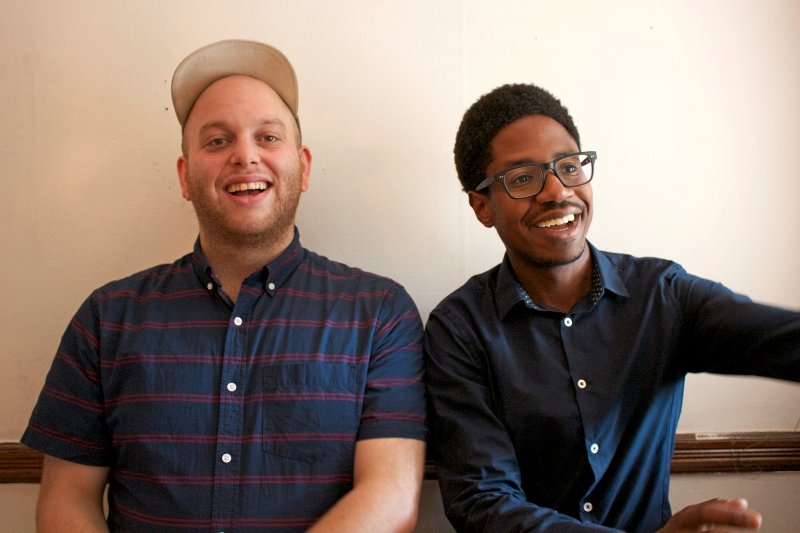 Anglophone comedians trying to make a name for themselves here in Montreal don’t exactly have it easy. While the city’s francophone comedy community churn out success stories on a regular basis, many anglo comedians seem to be “this close” to moving to Toronto at any given moment of any given day. A lot of comics throw in the towel relatively quickly, feeling defeated and discouraged by our city’s notoriously unresponsive anglo audiences. Performers who manage to become mainstays in Montreal’s comedy scene can easily blame the audience for an off night (or week, or year) and get bitter, or make light of this less-than-ideal situation and get better.

But if there’s one local comedy duo that’s seen enormous success in our city and beyond, it’s Chris Sandiford and Daniel Carin, aka Ladies & Gentlemen.

Since banding together about five years ago, Ladies & Gentlemen have solidified their reputation by focusing on the fun side of funny. Last year alone they made their OFF-JFL debut, launched a brand new sketch series at ComedyWorks and took the #1 spot on Cult MTL’s Best Stand-up Comedy Night for their weekly stand-up showcase, the Ladies & Gentlemen Comedy Show.

Sandiford and Carin have no intentions of slowing down in 2017. The duo kicked off the year with a stint at San Francisco’s SketchFest and, days after arriving back in Montreal, will record their first very stand-up special with the Brunch Club.

In a rare moment of rest, we caught up with the BFFs to talk comedy, collaboration and the beauty of scrambling towards success.

Kelly Hurcomb: Can you tell us a little bit about your creative process? How do you guys go about collaborating on material?

Chris Sandiford: It’s all Dan applying for things and then us scrambling to make sure it doesn’t seem like a scramble. I like to say that, essentially, Dan pushes us off a cliff with a couple of things in our bag and we have to improvise a parachute out of it. Or else we die and we don’t get to do this again.

DC: Chris and I became friends in late 2011. The next year, I got a spot on the Fringe Festival with a girlfriend of mine, who then became an ex-girlfriend who didn’t want to do a Fringe show with me anymore. I brought Chris on to that project and we worked really well together immediately. I don’t know who came up with the concept — it was sketches before we necessarily knew we were working in sketch. The end result was called Try Variety Show, where we were trying to put on the biggest, best “showbiz” variety show ever, but we didn’t know what we were doing. It was just Chris and I. No props or sets or anything. We tried to do this whole showbiz, proper thing, but we were just low-tech fools.

CS: Again, we just had that concept and then had to figure out what it meant, what we had to do from there. We reverse engineer a lot, I guess, which is okay. It really depends on what we’re thinking about, what’s inspiring us lately, what’s fun to play around with.

KH: In the last few months, you’ve organized and hosted two installments of Sketchworks: An Evening of Characters at the ComedyWorks, a show that invites local talent to do sketch and stand-up in character. Is that something you plan to continue in 2017? What inspired you guys to initiate yet another comedy project?

DC : Well, people are very nice to us. Walter Lyng, who books the ComedyWorks, asked us if we wanted to have a sketch show there. When we went to Vancouver last year, a huge part of the scene was in-character stand-up. We saw a couple of shows and they were great. I don’t know exactly how, but we just decided to give it a try.

DC: I guess we’re in all the different scenes. We’re stand-up, sketch, a little bit improv. I’ve tried to get improv people on the Ladies & Gentlemen Comedy Show at Shaika, but most of them don’t want to do straight-up stand-up. I’m proud to say we’ve had a couple of people do their first stand-up set on our show. So with Sketchworks, we’re kind of bridging the gap between different scenes. So far, we’ve had a good mix of stand-up, improvisers and sketch people, and we’re going to keep trying to book it that way. Not too much of any one thing.

KH: When you guys perform, you tend to incorporate other performers and friends into the show in one way or another. Is this something you plan to carry over to your Brunch Club Special? What can audiences expect generally?

DC: We’re still figuring it out.  My plan was to have it just be the two of us, but to incorporate all the different types of comedy we do. Stand-up is first, so we’re definitely going to be incorporating that, but we also want to have at least a bit of improvising, us playing around with each other because that’s really fun.

CS: Dan and I, whether or not we’d like to admit it, are entertainers first with a capital E, you know what I mean? We have a love for big show business. If it is just the two of us, we’ll be mixing all those schools. We’re not improvisers with a capital I, which is something I say a lot and I hope people know what that means, but when Dan and I perform we certainly love to mess around in that way. If an idea comes to one of us, the other can run with it. One can steamroll the other and trust that the other will bounce back and know it’s good for the show. We’re gonna try as many ways to make people laugh as possible.

KH: What else can we expect to see from you guys in 2017? Do you have any other exciting projects or tour dates coming up?

DC: I hope we get to do a few more festivals. Hopefully Toronto.

CS: We hope to travel more. You know, if there are any old girlfriends looking to reconnect…

DC: I hope to get hair. That’d be great.

CS: I’m hoping to have a beard.

DC: I just hope to do more, be better, figure out goals.