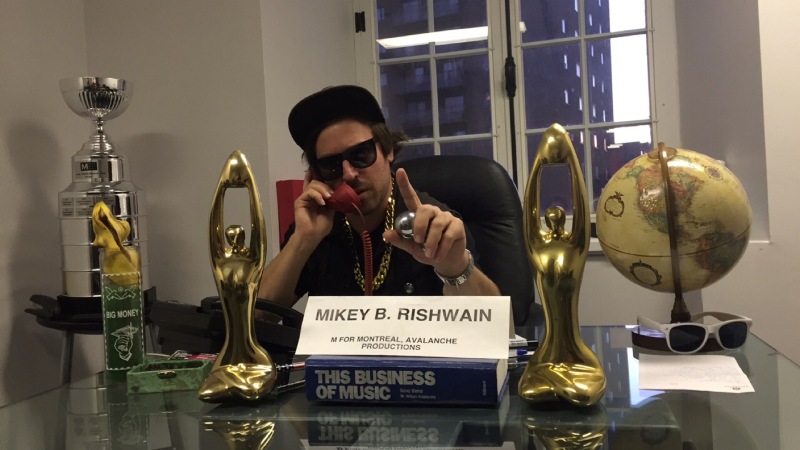 For the past nine years, Mikey B Rishwain has served as programming director and head personality at M for Montreal, an annual four-day music festival that showcases eclectic line-ups of (mostly) local acts to international music industry delegates and Montreal audiences. Ahead of this year’s edition (Nov. 16–19), we had an M for Memorable conversation with Rishwain to get better in tune with the man who makes it all happen.

Mr. Wavvy: What’s a day in the life like for Mikey B?

Mikey B: It used to be different, but last year’s 10th anniversary of M for Montreal was a big wake-up call for me. I was the kind of guy who was out four nights a week and would still get his job done. Now, I try to rest more, analyze things from a different perspective. I’m more on my computer now, which is fine.

At the end of the day, face to face is the way to go, and that’s what M for Montreal is all about. It’s where people can stop hiding behind their computer screens, emails, Soundclouds and just get straight to work on showing your worth.

MW: You’re originally from Stockton, California but have always had family ties to Montreal. Was there anything in particular that made you want to move here 10 years ago?

MB: I visited Montreal and Quebec City as a child a lot. My hometown was near Sacramento and San Francisco, only flatter, hotter and far more dangerous. In my years away from that city, it’s only gotten worse. Every year I go back for a few months and it’s tough to swallow.

I was seeing kids do meth, friends getting murdered, things I could never possibly conceive in Montreal. I felt safer here, and the music coming out during that era — the Dears, the Stills, Stars — was all incredible. I had a chance to come back out here and have been on this wave ever since.

MW: What does M for Montreal mean to the city?

MB: Montreal is an artsy town, we all know it. There’s also that savvy tech/business side on the come-up. M for Montreal has always been that “M for Middle Guy” to bring these artists together. If you look at Toronto, their scene is so commercial right now. We’re still keeping it real here, but we need to get out!

We can look at festival alumni like Grimes and Mac DeMarco — they were indie as fuck and now they’re straight-up stars! I think Montreal has had such a strong support system for these artists, and M for Montreal is one of those supports. I’m happy to be behind it. ■

For the complete M for Montreal program, visit the festival’s website.