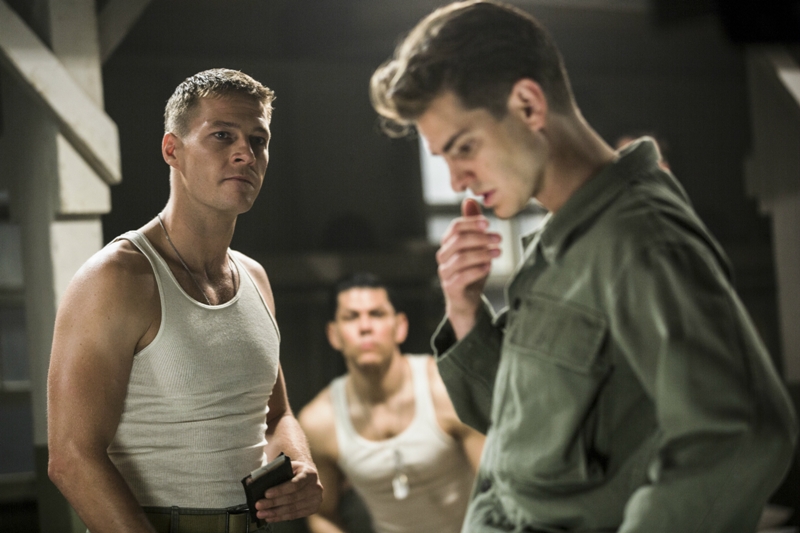 A couple of weeks ago, I described Nate Parker’s controversial Birth of a Nation as taking its cues mostly from the work of Mel Gibson: the brutal violence, the streamlining of the narrative to showcase hero worship and the melding of history to the aforementioned self-serving heroic narrative. (This extends to films that Gibson only starred in – if he wasn’t behind the camera, you could bet he’d find a simpatico helmer like Randall Wallace or Roland Emmerich to smooth over the rough patches.) Now, Gibson’s first film in 10 years hits multiplex screens, with the chief difference being that it feels more like Gibson’s is a kind of penance for his behaviour of the last 10 years.

On paper, a surprising amount of Hacksaw Ridge feels like Gibson apologizing. His movies feature too much Mel Gibson worship? No problem — he isn’t in this one! Characters in Mel Gibson movies resort to violence too quickly? No problem — the protagonist is a peace-loving, God-fearing vegetarian pacifist! Australia doesn’t feel like Mel Gibson is particularly proud of his Australian roots? No problem — this movie was shot there with an almost entirely Australian cast, despite the fact that the film has zero Australian characters! Mel Gibson has a pretty wack view of religion that makes it difficult to reconcile the outwardly religious content of his films with his not-so-pious personal life? No problem — Hacksaw Ridge is filled with Jesus, and the protagonist has an alcoholic dad so we’ll touch on that shit, too!

As easy as it is to be cynical about Hacksaw Ridge, it’s just as easy to forget that Mel Gibson became as big a deal as he did because he was skilled at what he does – and Hacksaw Ridge is everything that Mel Gibson does. And I won’t mince words here: Hacksaw Ridge is a pretty good war movie, and a pretty great uber-violent Jesus-y action movie from Hollywood’s most messed-up son. It’s also hypocritical and tonally schizophrenic. Ah, Mel, it’s good to have you back.

Desmond Doss (Andrew Garfield) is an honest, happy-go-lucky, God-fearing Southern man whose outward bonhomie and naivety betray a troubled upbringing. His father (Hugo Weaving) is a PTSD-afflicted WWI veteran who beats on Desmond’s mother (Rachel Griffiths) and seems incapable of keeping the demons of his time served at bay. When WWII hits, Desmond feels an obligation to join his brother in defending his country – but as a peace-loving Seventh-Day Adventist, he refuses to carry a weapon. He figures he can join as a medic, but his commanding officer (Vince Vaughn) isn’t so convinced, and his fellow officers make training a living hell. (He’s not a martyr, exactly; Gibson’s made that movie already.) When Doss is finally shipped out to Japan, he and his platoon are tasked with taking Hacksaw Ridge, an impossibly steep hill already rather well covered by the Japanese, which in turn leads to a disastrous initial assault. 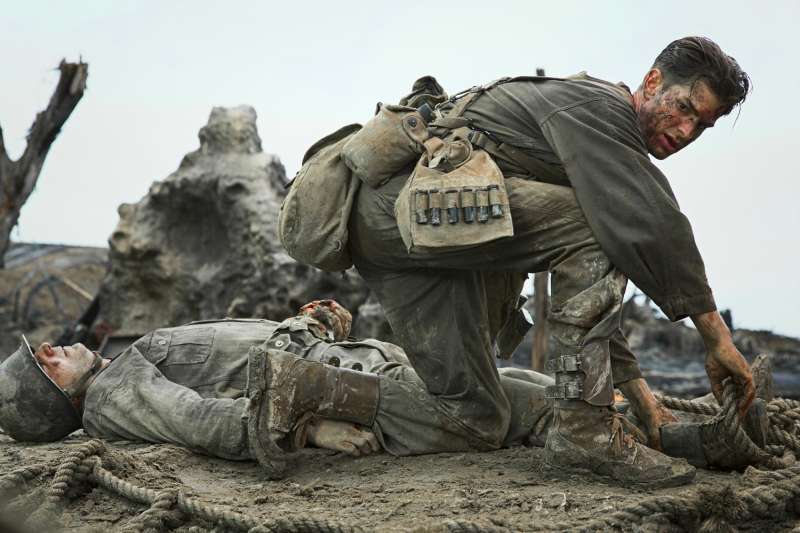 The first half of Hacksaw Ridge has a kind of gee-whiz simplicity that feels almost nostalgic. Although there’s definitely some trauma and darkness in Doss’s life (he sticks to his non-violent plan around the age of 10, after decking his brother in the head with a brick and seeing consequence to his actions for the first time), his courtship of his future wife (Teresa Palmer) and his wide-eyed optimism have an almost Capra-like quality to them. Even his time spent in bootcamp feels slightly fantastical, a colourfully heightened experience where even the hard-assed sergeant’s taunts seem to be on the soft side.

What Gibson is doing, of course, is building something so he can better tear it down. I wasn’t prepared for exactly how harrowing and punishingly violent the war scenes in Hacksaw Ridge would be. I supposed that, going in knowing it was about a conscientious objector who was also a real-life war hero, he’d get away with some dexterous anti-violent stunts. Not so: the second half of Hacksaw Ridge is riddled with burning bodies, exploding limbs, spurting arteries, soldiers’ corpses being devoured by rats and other atrocities that unfurl around the genial Doss as he attempts to save as many of his compatriots as possible. I don’t think it’s hyperbole when I say that this may be the most violent war movie ever made.

It’s a pretty simple A/B switch that Gibson pulls, highlighting the horror of the violence (and the randomness of it; characters introduced in the boot camp portion are dispatched with very little artifice) through the lens of Doss’s peaceful resistance, but it works remarkably well. Of course, it’s all a little hypocritical. Gibson’s been accused of glorifying violence in some of his films (notably the nearly pornographic torture of The Passion of the Christ), so now he’s using those exact same skills for the totally opposite intended effect — but Gibson is so good at this, and so incredibly fired up by the material that it becomes not only endearing but downright captivating.

There’s definitely a fair bit of corn sprinkled throughout Hacksaw Ridge (the music, the requisite “someone running through the muddy battlefield in slow motion” sequences) but the film has a classic stoicism that makes even the most mothballed of its clichés (not to mention its heavy lean on religion) affecting. It’s old-fashioned and maybe even a little passé as filmmaking, but it’s such a powerful and visceral experience that it proves very hard to shake. Apology accepted, I guess? ■