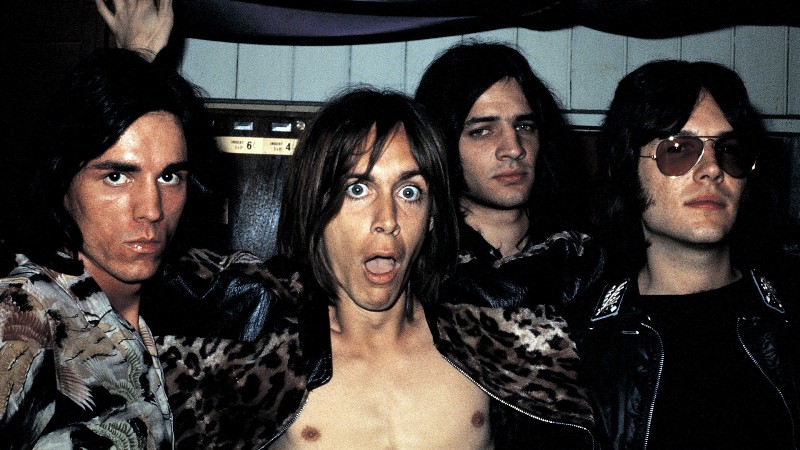 Major filmmakers who also moonlight as documentary filmmakers have become more commonplace recently, with major auteurs such as Martin Scorsese and Spike Lee often working on a music doc and a fiction feature simultaneously. Jim Jarmusch joins those hallowed ranks with Gimme Danger, an exploration of the highs and lows of the seminal rock band led by Iggy Pop.

Pop and late-period Stooges guitarist James Williamson are the only band members left standing — though Jarmusch did manage to interview Scott Asheton before his death in 2014 — and the band’s unpredictable and disorganized approach to their career (not to mention a fairly uncommercial image that results in few TV appearances) means that there’s very little documentation from the band’s early years. Still, Jarmusch remains undeterred to tell the Stooges story, even if it means filling in the blanks… creatively.

Jarmusch begins at the end — or rather at the Stooges’ first real ending in 1973, with bad business decisions sinking the project and forcing Pop and the Asheton brothers (drummer Scott and guitarist Ron) back to Michigan with their tail between their legs. Pop’s testimony — the entirety of which he delivers wearing, improbably, a shirt — drives the film, from his debut as the drummer for a raunchy R&B frat-rock outfit to his time as a blues drummer in Chicago to finally meeting the Asheton brothers, moving from behind the drumkit to the front of the stage. (“At some point, I just got tired of looking at butts,” he explains.)

Jarmusch takes a page from prolific rock ’n’ roll documentarian Julien Temple (Joe Strummer: The Future Is Unwritten, Oil City Confidential), filling in the blanks where stock footage and even photographs are missing by inserting old movie footage and other random bits of ephemera, but also rudimentary cartoons where scenes are recreated via cutouts of the Stooges with flappy mouths. It’s a device that I usually find irritating when Temple uses it, but it’s clear that Jarmusch is working with a fairly limited palette here — the Stooges were usually too fucked up to document themselves, and they weren’t the kind of band that could easily be paraded on a late night talk show or even be trusted to sit still long enough to be preserved.

That having been said, there’s something that feels a little loose and lazy about Gimme Danger. Perhaps it’s Jarmusch’s personal friendship with Pop that gives the whole thing a bit of a slapdash feel, or maybe it’s his clear undying love and respect for the band that means he doesn’t really want to delve in too deeply. Jarmusch chooses to interview each member separately (except for brief snatches of one interview with Iggy and Scott together) in incongruously low-key locations. Pop first speaks from a laundry room, while Williamson is shot holding a plugged-in guitar in what appears to be a public washroom (!) and more recently enlisted bassist Mike Watt is sitting on a tiny chair in a very brown hotel room.

I think the idea is to give this grungy, improper band a documentary in their image (rather than, say, having them against an antiseptic white background in tailored John Varvatos outfits), but it mostly feels like the film is an afterthought, a piecemeal scrapbook creation Jarmusch worked on between other gigs. It comes off as more of a chummy celebration of the band’s music for the band’s members (the only person interviewed who wasn’t ever in an iteration of the Stooges is Kathy Asheton, sister of the Asheton brothers) than anything resembling an in-depth document. Jarmusch is an incredible filmmaker, but mostly an undisciplined documentarian.

How much you enjoy Gimme Danger will likely depend on how much you know and enjoy the Stooges’ music. Neophytes might be turned on by the music’s raw power (that was intentional), but the film does little to situate the band in a broader context. Seasoned fans may enjoy the hang-out aspects of the film, but there’s little here that most diehards won’t already have absorbed. It’s definitely a fun, breezy watch, but a highly inessential one. I never get tired of listening to the Stooges, but that’s why I have the records at home.