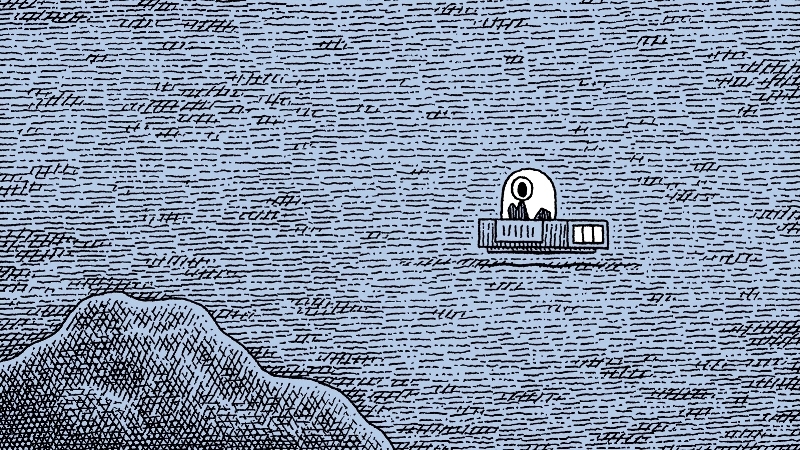 Why did we go to the Moon? Why did we settle there, then leave? Like a modern space-western, Mooncop’s protagonist is the last sheriff in town, a lone wolf, the only guy willing to take the job of keeping the peace on this dusty old planet.

In his latest book, Scottish-born Tom Gauld takes us on a pensive and calming journey, hovering across the Sea of Tranquility, drinking coffee and eating donuts, interacting with the locals and companion robots. It is a truly insightful experience.

There’s restraint and patience to Mooncop. The reader is drawn into the gig, coasting silently around in a police-patrol-ship, taking orders from Earth, and in a perpetual state of existential crisis. Mooncop’s sparse narrative makes our own anxieties seem so much smaller: at least they’re not closing this planet down.

Ahead of the Sept. 19 launch event at Librarie D+Q, I spoke with Tom Gauld about Mooncop, the creative process, and the value of quietude. 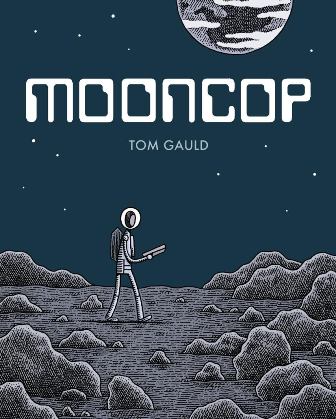 Natalia Yanchak: The Comics Journal wrote, “Nobody does silence like Tom Gauld.” How do you feel about that?

Tom Gauld: I like that quote. Comics are made up of words and pictures, but I think more important than either is the way they interact with each other.

It’s not very interesting to say the same thing with both text and images so if the pictures are doing a good job of telling the story then I’m happy to have some silence. Conversely, if the dialogue is moving things along then the pictures can do a quieter, more atmospheric job.

I also like to leave some space where I hope the reader might project some of themselves into the comic. A bit of silence or a moment of stillness might have more of an effect than speech or action.

NY: Which comes first: the narrative or the image?

TG: All my work starts in the pages of my sketchbooks. I’ll sit and look at the blank page and then slowly fill it up with notes, doodles and diagrams. Sometimes the words come together first and I have to think how to present them in a visually interesting way. Other times I’ll start from an interesting image and work out the story around it. Mooncop took shape in a third way, where it was more of a vague idea in my mind, a bit like a feeling, which was neither words or pictures. I had to turn it into words and pictures so that I could capture it on the page. 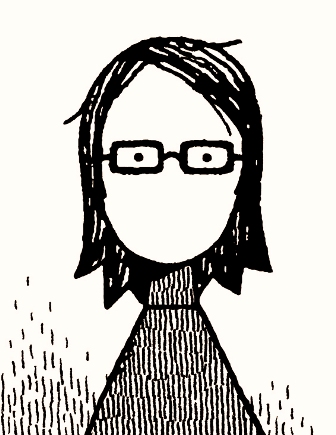 NY: One of the freedoms that comes with writing science fiction, or near-future speculations, is that nothing is off-limits, or impossible. Anything might happen so, for example, a solar-powered cucumber is not a crazy idea. How does normalizing the outlandish play into your creative process?

TG: In a short cartoon you can present a funny idea without working out all the details and inferences. In fact the humour might even come from the unlikeliness or lack of logic. But in a longer story I think you need to be a bit more rigorous. For this reason I wanted the science fiction world of my new book Mooncop to be believable. It isn’t realistic, but I tried to make sure it followed its own internal logic. I thought quite a lot about aspects of the moon colony which don’t appear in the book because I felt if I understood the workings of the place I’d write a more believable story set in it.

In Mooncop the visuals and setting are from an outlandish science fiction world but the story is much more everyday and down-to-earth. I like juxtaposing things like this in my work. You could say it’s normalizing the outlandish, but it’s also outlandishing the normal. ■