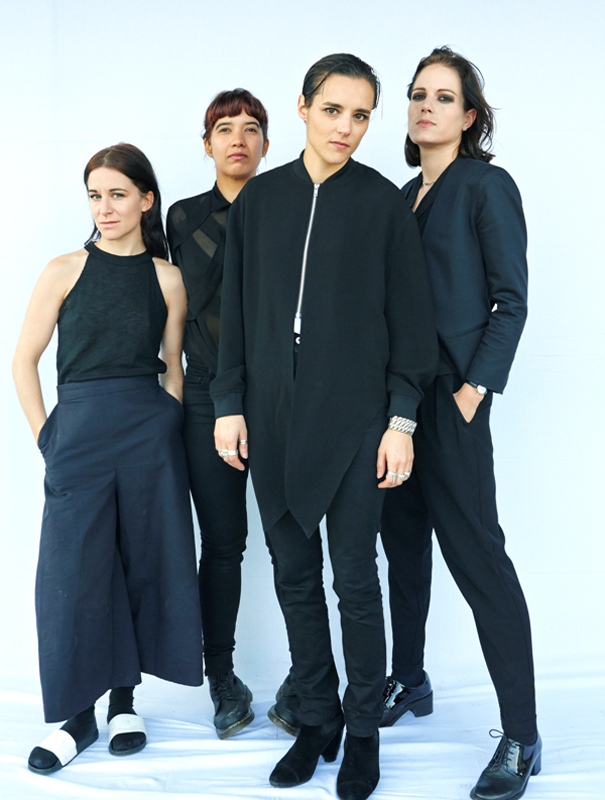 The emergence of this four-piece post-punk band in 2013 couldn’t have been better timed — in a field overpopulated by tepid indie pop acts shielding themselves from any real stakes with a thick coat of jokey aesthetics and irony, Savages were fierce, sexy and serious.

With their sophomore record, Adore Life, they’ve achieved what so many bands behind great debut albums fail to do: they’ve maintained the feel of what made Silence Yourself so vital while opening up more sonic and poetic pathways to the hearts and minds of their fans. (Read my review of Adore Life here, and, for more context, my 2013 interview with Savages singer Jehnny Beth here.)

Last month I spoke to drummer Fay Milton about life since Silence Yourself, the band’s dedication to their live show and their revealing connection with an experimental Japanese band.

Lorraine Carpenter: How have the shows been going so far?
Fay Milton: They’ve been going great. We’ve been going around the U.K., seeing familiar faces of fans who’ve been with us from the early days. We’ve been away for a couple of years, and to come back and find the same friendly faces there in the crowd, it’s really good.

It feels like a fresh beginning in a way. We’ve got a new playlist with loads of new songs, and a new lighting set-up, but we’re playing the same kind of shows as before: low, dark, powerful stuff.

LC: How much has your life changed since 2013?
FM: Completely. We released the first record very quickly and the touring kind of tumbled after it. Everything happened at the same time — we were flying everywhere, backwards and forwards and zigzags around the world. It was chaotic but amazing; we went to so many places and learned so much.

When we got back home, we took a bit of time off and then we had a year, more or less, for writing and recording, which is the opposite mindset from touring. You’re really introverted, in  little bunker together all that time.

It’s a different life, in a way, when you walk out onto a stage and you have that different persona. The way you behave and move and act is different from how you would 10 seconds before you walked onto the stage. It’s not that it’s a lie or any of it is fake, it’s just performance — as soon as you’re in front of people, it’s fight or flight in a way.

LC: Did making Adore Life live up to the “difficult second album” cliché?

FM: If we were the first band to ever make a second album, we might say that was quite difficult, more difficult than the first. But going into it with the expectation that the second album is gonna be difficult, it’s surprising how easy things can be.

Difficulties lay in places we weren’t expecting. Writing, having ideas and playing together wasn’t difficult, but there were struggles and pain as well as joy.

When we finished recording and producing the first record, it was exactly 100 per cent how we wanted it to sound at the time. You listen a year, two years on and you’re stuffing your ears going “Ah! No! What is this awful racket?” You look at all the microscopic things you would change and they seem huge — they’re really small technical things.

So this time we pulled everything apart a lot more and listened to every detail more closely, with a magnifying glass over everything. We got Anders Trentmoller to mix it, and he brought his magical sonic touch to that.

Next time it will probably be the same, but at the moment this record is exactly right — it captures us and our sound at this point in time. Every record is a document of a time as much as it is of a set of songs.

LC: Back in 2014, you released a collaboration with a Japanese band called Bo Ningen, Words to the Blind. How did that come about?

Basically we had an idea for a piece with them where we all play at the same time. We were on a big U-shaped stage and we were set up mirroring each other: two drummers in the middle and everyone else on the sides. It was based on simultaneous sonic poetry, which used to be performed in the Dadaist period; two poets would perform spoken word poetry different languages.

I love it — it’s insane. The first time I listened to the recording, I couldn’t stop laughing because it’s just bonkers. There’s a section in the middle where it’s like a battle of the bands, them making noise and us making noise, and at the end there’s a long jam where it’s really groovy and it sounds like some weird Can song. It’s not your usual release, definitely — it’s really cool.

LC: I can’t imagine you collaborating with other bands — what was it that made this collaboration make sense?

FM: They’re really inspiring. They’re a very different band, but we have an affinity with them. They’ve got a similar mindset to us: musically they really throw themselves 100 per cent into what they’re doing, and they’re from a dark underworld — they’re dressed in black, usually, so the aesthetic is similar. They’re also serious about it — as much as they’re super-fun, cool guys off stage, on stage they’re tearing it apart, they’re ripping it up, and it’s really artistic. ■

Enter a contest to win tickets to this show here.