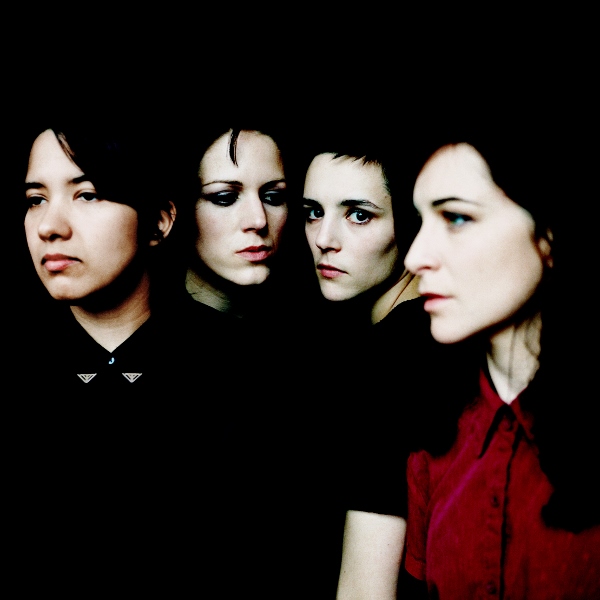 Silence Yourself is the debut album by Savages, a ferocious, fully formed record that sounds like a lost transmission from the core of England’s post-punk lineage.

The world’s first sighting of Savages came as recently as Jan. 2012, with a short, well-shot B&W video of the band performing one of their best songs (my personal favourite), “City’s Full.” With Ayse Hassan’s bass at the apex of the mix and singer Jehnny Beth’s wide-eyed transfixion, it screams Joy Division more loudly than anything on their subsequent record does.

The comparison to the posthumously ubiquitous Manchester band is common, as is that of Beth’s voice to Siouxsie Sioux and Gemma Thompson’s guitar grind to PiL. They’re all apt, but more than most contemporary bands designated post-punk, Savages are worthy of inclusion in that canon. And unlike much of the canon itself (with the possible exception of Siouxsie & the Banshees, who had their moments), Savages are sexy—their music, while easily linked to post-punk’s anti-blues, “rip it up and start again” ethos, doesn’t entirely eschew rock ’n’ roll’s carnal groove. Just listen to “Strife”—the song would penetrate you sexually if it only had a cock.

And that, if you’ll pardon the salacious segue, is where Johnny Hostile comes in. Beth and Hostile—née Camille Berthomier and Nicolas Congé—have personal and musical roots that go deeper than this decade, down to 2006, when they left their hometown of Poitiers, France for London, where they launched their music project John & Jehn.

“It was a very intimate project, something that was much more a way of life than a profession, which is what I consider the music to be now with Savages,” says Beth. “John & Jehn was, for me, very valuable—everything I know about music or the music business is something I’ve learned with John.”

When it came time for the duo to tour their sophomore LP, Hostile enlisted a drummer and a girl he had “a guitar crush on”: Gemma Thompson. Over two years on the road, he and Thompson made a musical connection that moved her to ask him to sing in a new band she was forming with Hassan, the band that would become Savages. But this coincided with John & Jehn falling out with their label, founding the Pop Noire label and signing LESCOP, a project that Hostile became increasingly occupied with in the studio. So he stepped away from Savages, never venturing to centre stage, though he’d eventually return to produce Silence Yourself.

“I thought it’d be a good idea if I tried to sing for this project,” says Beth. “When Gemma came up with the name Savages, I was writing lyrics that I thought were similar to the ideas that Gemma had and the things she was reading at the time, and so we sat down and tried to see it clearly. But there were no sounds—it was more like ideas. And then the three of us—me, Gemma and Ayse—thought we should have a female drummer, so we asked around and found Fay.”

When asked why the drummer needed to be female, Beth laughed at her inability to explain their reasoning. An intuitive desire “to create something complete” was as close as she came to an answer. It’s not much of a leap to attribute the choice to aesthetic consistency, especially when you see what a different beast Beth was in John & Jehn, with her longer hair, vulnerable eyes and relatively innocent lyrics about love. Savages is deceptively high-concept, and that’s what makes them so damn tight.

Aside from the band’s sonic power and songwriting skill, and Beth’s gripping stage presence and masterful voice, Savages are remarkable for the way that her penmanship matches the music’s sexual energy. She manages to be frank AND sexy without sacrificing poetic flow, an especially impressive feat for an ESL writer.

“Then, in terms of music, it was more trying to find a representation of the ideas that we were having, and also concentrating on the fact that we wanted to write for stage. We wanted to write music to be performed.”

As great as their record is, seeing Savages’ live show is reportedly essential—the NME called it “frottage-inducing,” but we’ll have to report back to you about that. In John & Jehn, Beth developed a flare for theatricality, and an understanding that focused intent and simple presentation are key to audiences’ hearts and minds.

“It’s not that people really notice it. It’s kind of subliminal,” she says of Savages’ performance technique. “Instead of looking at what other bands are doing, we just asked ourselves, ‘What would you do if you had to do everything from the beginning, strip everything down and start again from scratch?’ This is how we try to communicate with our music in different ways, to bring people into our world.” ■