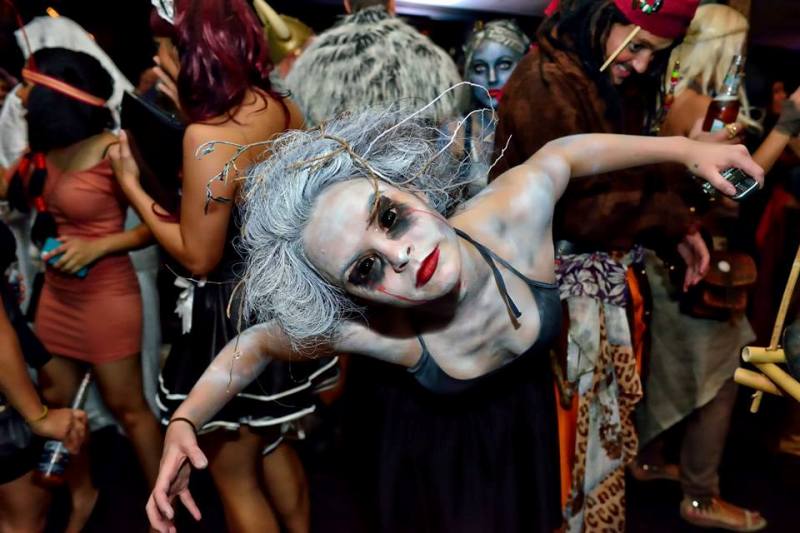 Halloween is upon us

The following is an alphabetical list of Halloween parties at Montreal bars and clubs, followed by Halloween theatre and film events.

L’Abreuvoir hosts a two-night bash called La Toussaint, a voodoo party in the Haitian tradition, wherein the living ask the dead to change their lives. 403 Ontario E., 7 p.m. on Oct. 30, 8 p.m. on Oct. 31

Casa del Popolo gets Halloweeney with a Passovah Productions party featuring the launch of Zone Eater, the new record by Smokes, supported in style by fellow local acts Daniel Isaiah and Year of Glad. 4873 St-Laurent, 9 p.m., $10

Ecole Privée gets a Sleepy Hollow makeover by a movie-set designer for the entirety of Halloween weekend (Thursday through Saturday). 1 Milton, 10 p.m., cover charge unknown

Katacombes’ Friday night party encompasses the fifth anniversary of the Montreal Zombie Walk and part of the 20th anniversary of local label Stomp Records, the latter being the launch of a brand new record by the Brains (Out in the Dark), supported by fellow local bands Kman and the 45s, East End Radical and Los Kung Fu Monkeys. 1635 St-Laurent, 8:30 p.m., $15/$20

Piranha Bar’s Trash Ton Karaoke gets its Halloween edition on with costume prizes and a mic ready for alt-music lovers to belt out their favourite tunes. See the band list and prize details here. 680 Ste-Catherine W., 9 p.m., free

Pub West Shefford is the site of Cerise Sur le Gâteau’s Bow Down 8: The Beyoncé Themed Party, a QTPOC Halloween bash at a newly acquired spot in the Plateau, with music by DJs Lykxand #thisisdope, plus prizes for best Beyoncé costume. 1562 Mont-Royal E., 11 p.m., $7

TRH-Bar invites metal fans to Trick or Trash 2, where you can headbang to thrash and death metal bands Eternal Judgment, Genetic Error, Cromagnum, Devora and the Poor Generation. 3699 St-Laurent, 8 p.m., $10/$12 without a costume

Artgang will be the site of the Warriors party, the theme being the cult film about future gang warfare in NYC. DJs Forrest, A-Rock, M. Bootyspoon, River Lance, Ruined Sunday and special guests, and this one is hosted by DL Jones. 6524 St-Hubert, 10 p.m., $15/$20

Blizzarts will be all uniforms at L Night’s Jailbreak Party, under the influence of Orange Is the New Black, Wentworth and Unité9. Music by DJ Elo. 3956A St-Laurent, 10 p.m., free

L’Escogriffe will be rockin’ with Analogue Addiction’s Halloween show, with Sonic Avenues and Alparchie. 4467 St-Denis, 9 p.m., $10

Espace des Arts hosts Valhalla and Nomadik Groovement’s Past vs. Future party, with music by Oonga, Royalty Official, Oceans vs. Mountains and Funkward, with beer pong, a photo booth and, they claim, an insect buffet, plus a $100 cash prize for best costume character. 9 Ste-Catherine E., 10 p.m., $15

Foufounes Electriques, Montreal’s landmark alt bar, is well known for doling out generous cash prizes for Halloween costumes, and this year’s party is no different. The first place winner will bag $500, while second prize earns $200 and $100 for third. There’s also candy, door prizes and sick drink specials for everyone. 87 Ste-Catherine E., 8 p.m., $13 in advance (includes priority entrance & coatcheck), $13 at the door (nothing included)

Joverse’s Twisted Fairy Tales invites you into the home of Joseph Versailles for a spooky dinner party turned club night. Dinner reservations are available at 7 and 9 p.m., with bottle service after 11 p.m. 52 St-Jacques

Newspeak is where I Love Neon is throwing down for Halloween, with beats and melodies by Tokimonsta, Dead Horse Beats, Robert Robert and Jamvvis. 1403 Ste-Elisabeth, 10 p.m., $15/$20

The Paradoxe Theatre in Ville Emard is where Cirque de Boudoir is throwing down this Halloween, and the theme of this year’s kink party is Church. The event is hosted by Plastik Patrik and David Hener, with DJs Omni, JNNBNNRCK, Diskomander and Davidé, performances by the Royals, les Reines and Holy Scar along with Demonic gogo dancers, body painting and a kinky play area. Wear your Halloween best — over $1,000 in prizes will be awarded. 5959 Monk, 9 p.m., $30/$40

[UPDATE: THIS EVENT IS NOW SOLD OUT.] The Phi Centre hosts Hysteria, an immersive burlesque/drag spectacle starring Billy l’Amour (alias Mistress of Madness for this occasion) and friends, with music by DJ Barbada, a short horror film (Catatonic, presented in VR), a dim sum counter for the peckish and more surprises. 407 St-Pierre, 9 p.m., $20/$30

Rosewood bar in Old Montreal welcomes all vocalists to uRockaoke‘s annual Halloween show, with a live band to back all singers who take the stage and prizes for best costume, audience appreciation and delivery of goods. See the song menu here. 60 St-Jacques W., 9 p.m., cover charge unknown

Sala Rossa’s got The Goods, aka DJs Andy Williams and Scott C, with special guest DJ Ruby Jane (co-host of recurring club night The Sauce) bringing an extra layer of soul, funk, disco and old-school hip hop. Costumes are encouraged but not mandatory — as usual, The Goods is “no frills.” 4848 St-Laurent, 10:30 p.m., $10

Snack ‘n’ Blues transforms into the House of the Cannibal Clowns, with live music by She Devils and Secret Secret Girl plus spooky tunes from DJ Grimace Grimaci of Timber Timbre. 5260 St-Laurent, 9 p.m., $5

Studio Backstage in the Village will be draped in black for a GothFest’s Freak or Treat, a multifaceted Halloween party with live music by Cellrot, Hexapheen, Great Deal of Noise and Monde Cruel, DJ Ulcere Nucléaire and host Goth Jimmy. 1661 Ste-Catherine E., 9 p.m., $10/$12

[UPDATE: THIS EVENT IS NOW SOLD OUT.] Théâtre Fairmount will be bustling with a four-way party put on by Arbutus Records, Blue Skies Turn Black, CJLO and I Love Neon, with live music by TOPS, Puro Instinct and Mozart’s Sister and a DJ set by Blue Hawaii. 5240 Parc, 9 p.m., $10/$12

Théâtre Plaza hosts the Old School Halloween bash thrown by the Spasm Film Festival of horror trash cinema, with music by DJs Gil and Gallant progressing through the ages as the hours pass (starting with ’70s at 9 p.m., 2000s at midnight and then back, with a bonus mix for the night’s bonus hour — clocks go back an hour on Halloween night). 6505 St-Hubert, 9 p.m., $20/$15 per person for groups of 5+/$12.50 per person for groups of 10+/$50 with a festival pass

On stage, on screen and on the streets 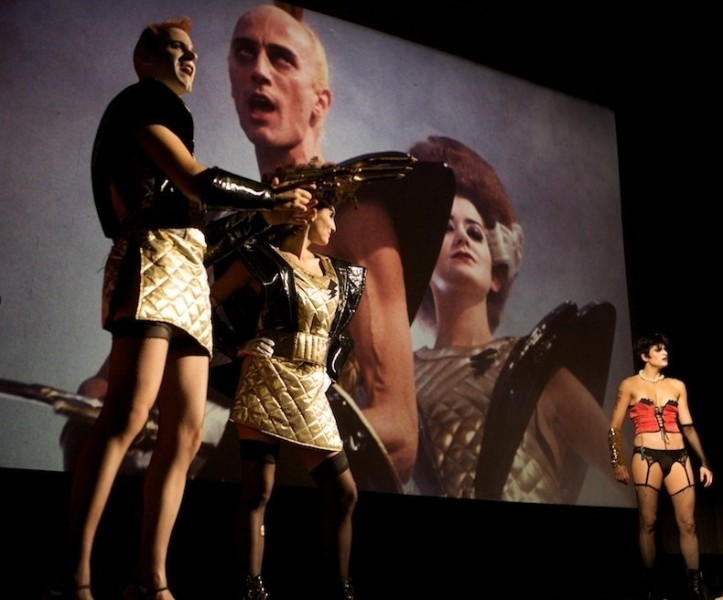 It’s the 40th anniversary of The Rocky Horror Picture Show, and the best way to see the classic film is at the Montreal Rocky Horror Picture Show Halloween Ball, the biggest of its kind in North America, with host Plastik Patrik, a costume contest and a live cast you can shout, sing and dance along with. Cinema Imperial (1430 Bleury), Oct. 29, 30, 31, shows at 8 and 11 p.m., $18/$20

For the seventh consecutive year, Neighbours Productions presents a theatrical guided tour through a labyrinthine house of horror and abomination. SIN is in! 264 Ste-Catherine E., Oct. 28–31, tours begin at 8 p.m. and run till late, $20

Get your gore suit and grunt sounds on for the Montreal Zombie Walk, happening on Halloween at Place des Festivals in the Quartier des Spectacles. Jeanne-Mance btwn Ste-Catherine & de Maisonneuve, Oct. 31, meet-up at 1 p.m., departure at 4 p.m.

Marilyn Monroe, Whitney Houston and Amy Winehouse live again at the Wiggle Room’s Dead Divas Burlesque show, with over half a dozen performers resurrecting and saucing up the songs and personas of these film/music icons. 3874 St-Laurent, Oct. 31, doors open at 7:30 p.m., show at 9 p.m.,$20/$25

St-Laurent Blvd. is getting Halloweened up this weekend: Samain (Oct. 30 and 31) promises (probably French-language) storytellers, a witches’ market and a performance by Dracula (?) in Parc des Amériques (St-Laurent and Rachel), candy distribution from local merchants and screenings of late ’90s horror classics Scream and From Dusk Till Dawn at Cinema Excentris (3536 St-Laurent). ■