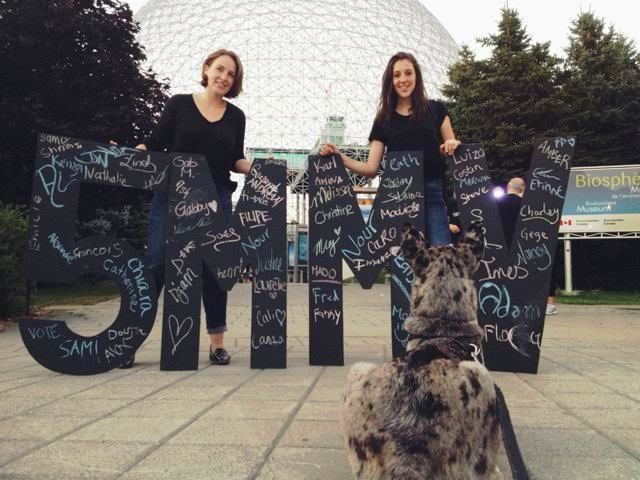 For nearly 12 years, Apathy Is Boring has been on the ground at cultural events in Quebec and across Canada, reaching the youth and engaging in conversations about the importance of getting out the vote.

Hard at work during this summer federal electoral campaign, the non-profit organization is not interested in how you vote. They just want to see all people — especially the newest crop of voters — out at the polls on Monday, Oct. 19. The group’s ongoing #5MMV initiative at concerts, festivals and sporting events aims to reach as big a segment of Canada’s estimated 5.5 million millennials and convince them their voice on the ballot counts for as much as their voice in any form of social media engagement, if not infinitely more.

I saw them in action at last month’s POP Montreal and MRCY festivals, and in the lead-up to the federal election, it’s important to revisit what AIB is all about. Even at the eleventh hour, perhaps a reader out there will be inspired by the passion and drive of Caro Loutfi.

Darcy MacDonald: How did you become involved in Apathy Is Boring. Also, please explain in brief the history of the organization.

Caro Loutfi: I started out as an intern almost three years ago, and then worked my way up in the organization as the youth-friendly coordinator, then director of operations. I was interested in the organization’s youth-led, creative and innovative approaches to understanding and addressing youth disengagement in civic life.

The organization was started in 2004 by three artist friends who were at a party discussing youth disengagement prior to that year’s federal election. Their shared concern inspired them to start a campaign raising awareness around the youth vote and has led us to where we are today, a charitable organization continually striving to understand the complexities and diversity of the causes and solutions that have an impact on youth civic engagement.

Darcy MacDonald: How and when did you become politically aware

Caro Loutfi: I always voted and volunteered, likely because of my family and the environment I was raised in. However, I never felt connected to my government representatives and did not have a clear understanding of how government affected my everyday life.

Once I started engaging with Apathy Is Boring, that changed. I started to have conversation after conversation with other young Canadians, my peers, around whether or not we should engage with “the system.”

This is now my answer to why it matters: without electoral participation from Canadian citizens, the very legitimacy of our democracy and the policies that are created by our democratic institutions are called into question.

Encouraging the participation of young people is particularly important because the research shows that if a young Canadian does not vote in the first two elections in which they are eligible, the likelihood is that they will not start voting later on in life. No mortgage or tuition bill will change that habit.

In addition to all of this, the fact that young people all over the world fight for the opportunity to have their voices be heard has made me even more passionate about the importance of engaging politically.

Darcy MacDonald: What do you see on the ground when working live shows and festivals? Apathy or engagement? How many people stop to talk, versus those that brush you off?
Caro Loutfi: We’ve been pleased this year to see that most of the people who brush us off do so because they’ve either already registered to vote or in some cases have already voted.

The myth of voter apathy is just that: a myth. The reason voter turnout is so low amongst our demographic stems from several barriers, including lack of knowledge about the electoral system, mistrust of the electoral process and uninspired civic literacy programs.

What we see on the ground is a desire to engage, but a disconnect between youth and the democratic process. We’re trying to bridge that gap by providing people with the information they need and having meaningful conversations about how to engage in civic life.

Darcy MacDonald: At a personal level, how do you feel art — music in this case — engages awareness?

Caro Loutfi: Art and music act as an important conduit of social interconnectedness and can help facilitate difficult discussions around engagement. For Apathy Is Boring, concerts have allowed us an opportunity to reach less engaged youth by going beyond the confines of on-campus outreach and catching our peers at a time when they are relaxed and inspired to talk. Music is about expression and (we) encourage youth to have their voices heard.

Darcy MacDonald: What is your inscription rate like, offhand? How many people would you say register to vote as a result of interaction with your teams?

Caro Loutfi: The research shows that peer-to-peer conversations are the single most important strategy to encourage youth voter turnout. We were able to test this during the B.C. provincial election in 2013. In B.C., we reached over 10,000 youth and the youth that we registered on spot ended up voting at a 17.5 per cent higher rate than the provincial average for that same age demographic. This work in B.C. allowed us to evaluate our outreach methods and understand our impact.

I should mention that we are less interested in meeting a specific target than we are in having meaningful conversations with youth, however on average we speak with about 70 people per event with a team of three to four volunteers.

Darcy MacDonald: I understand the initiative is non-partisan, but what are some of the values Apathy Is Boring would like to see in play at a governmental level in general?

Caro Loutfi: We’d like to see more youth representation in all levels of government. As a youth-led organization working with young leaders across the country, we firmly believe in young people’s abilities to act as decision-makers. There are 5.5 million millennials in Canada and if these young people are ignored, our society as a whole suffers.

Outside of efforts to encourage youth to be more active in the democratic process, we’d like to see efforts made to speak to the needs of marginalized communities: indigenous youth, newcomer youth or disengaged youth who don’t always have the resources or the necessary support to implement projects to help the livelihood of their communities.

Darcy MacDonald: Where do your volunteers come from and how does one become involved?

Caro Loutfi: One of the great things about our street teams is that they bring different kinds of people together. While we have volunteers who are policy experts or political science students, we have a lot of volunteers who are huge music fans and want to find a way to engage, but haven’t found a cause that speaks to them. ■

See the Apathy Is Boring website here for more details.

For our latest city coverage in Montreal, please visit the City section.