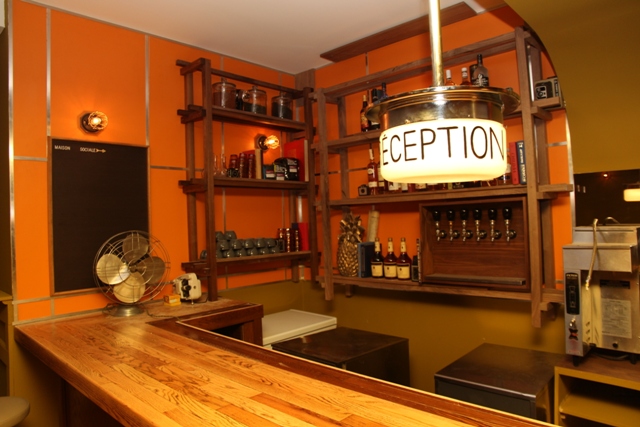 The bar. Photos by Lisa Sproull (scroll down for a full gallery)

Maison Sociale is a new café (feat. the team from Café Sardine), restaurant (head chef: Tom Allain), bar, social club and radio station located at 5386 St-Laurent. As a nod to the former occupants of the space, the radio station — to be broadcast on-site and online — will be called Green Room Radio.

These are the dudes behind Maison Sociale, which opened for business yesterday.

Na’em Adam
PR
Co-founder of Montreal’s Burger Week and Poutine Week as well as the Keepza restaurant app, Adam is well-versed in the local food and restaurant promotion scene.

Christophe Beaudoin Vallières
Bar chef and night manager
At age 22, and despite child labour laws, CBV already has nine years’ experience in the restaurant business. He worked his way up from dishwasher to bartender and bar chef at such establishments as la Distillerie at Barroco.

James Benjamin
Radio station manager/program director
Benjamin is a producer and soundtrack composer, and some will remember him as the co-frontman of the Breezes. He currently owns a third of Breakglass Studios, and spearheaded the recording space’s live performance/broadcast series in 2013. (See our interview with Benjamin about Maison Sociale and the radio station here.)

Marc-Antoine Clement
Carpenter/designer, handling maintenance/inventory
With experience in the film business (X-Men: Days of Future Past, White House Down) and interior design company Yoo and at local establishments Ibis, le Mal Nécessaire and TRH-Bar, Clement was eager to take on the challenge of building a walnut bar and banquettes and co-designing a space inspired by The Grand Budapest Hotel — he credits that idea to co-owner David Schmidt. Clement also works at NSNGfurniture.com.

Rob Roy-Laliberte
Hospitality/promotion
RRL has served as doorman, host, head of security, manager and general manager all over town: Cafeteria, 1234, Lamouche, Terrasses Bonsecours etc. He describes Maison Sociale as “a living room where everyone is welcome, a stress-free atmosphere providing a voice for the community, coupled with a classy and cool bar programme and menu.”

Peter Schwartz
Media and online content
With experience running video at AskMen.com and presiding over his own video production company One Sum Communication, Schwarz is taking on the role as Maison Sociale webmaster. He’s also assisted in conceiving the menu with the food team, and will be involved in planning the space’s seminars, courses and creative events. “Other than that, I plan on being our biggest client as well.”

Philip Tabah
Online marketing
Founder of local digital magazine TheMainMTL.com, Tabah assisted with the space’s construction and set-up and will be curating the community blog, helping the marketing team and running social media. ■