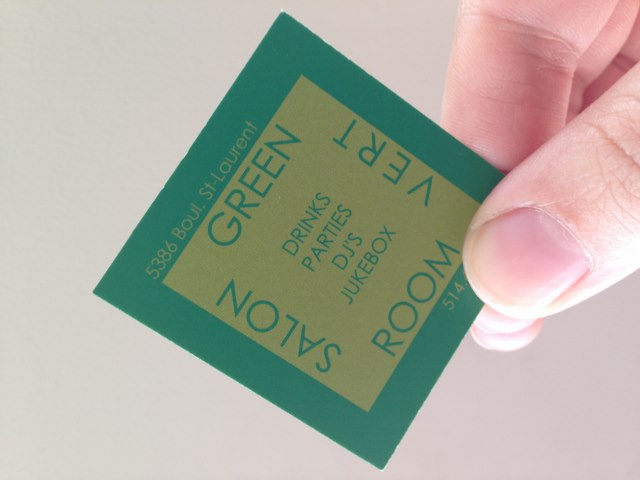 Its location, 5386 St-Laurent, once housed the music venue, bar and party spot the Green Room, operated by Greenland Productions. Since the Green Room shut down in 2008 due to a fire — and harassment from a neighbour whose noise complaints closed the affiliated Main Hall venue upstairs — the space has been occupied by a café, but it was recently acquired by a collective of new owners including Dave Schmidt (co-owner of Mais, Datcha, le Mal Nécessaire and the defunct Café Sardine, whose coffee crew is coming on board at Maison Sociale), Philip Tabah (who runs local blog The Main) and James Benjamin (musician and co-owner of Breakglass Studios).

“It’s an important spot for the music scene and anybody who’s been out and about in Mile End in the last 10-odd years,” Benjamin says. “It’s almost as if it’s growing up with all of us who were there back when it was a grungy party hang. This is going to something that’s a cool follow-up or evolution of the space.”

The new owners will be paying tribute to the former tenants (with their blessing) by calling the in-house radio station Green Room Radio. Cult MTL is one of the individuals/entities who will be volunteering services to host a weekly two-hour show (Thursdays, 5à7). The programming will run all day on Maison Sociale’s sound system and website. There may be live performances, too, but of the low-key, acoustic variety so as not to aggravate the neighbours (and suffer the same fate as Green Room/Main Hall).

“You’ll be able to see the radio room from the street,” Benjamin explains, “and someone I  booked for a show said it’ll be like Do the Right Thing kinda vibes where you’re walking by and you’re listening live, except it won’t be a boombox, it’ll be an iPhone.”

The partners hope to appeal to artists and other aesthetically fussy Mile End clientele with design and decor inspired by Wes Anderson’s 2014 film The Grand Budapest Hotel.

“It’s gonna have a very distinct style, with a lot of burnt oranges. One of the partners is a carpenter, so a lot of stuff has been built from scratch.

“It’s the kind of place where you can come and be comfortable to have a meeting, or to have a coffee — it’s not like you’re gonna get kicked out if you’re not eating something. There’s a bunch of space in there, so it’ll be chill, and then at night there will be some pretty epic DJ events.”

The party side of Maison Sociale will be complemented by a cocktail bar set up by one of the partners, a bartender at Old Montreal supperclub Barroco. And while Benjamin says that club members will have special deals, Maison Sociale is a public space not a private one, and membership isn’t mandatory or built in as a licensing loophole — it’s fully licensed.

“The membership idea is more thematic, bringing people together. Our hope is that it’ll have a real community feel.” ■