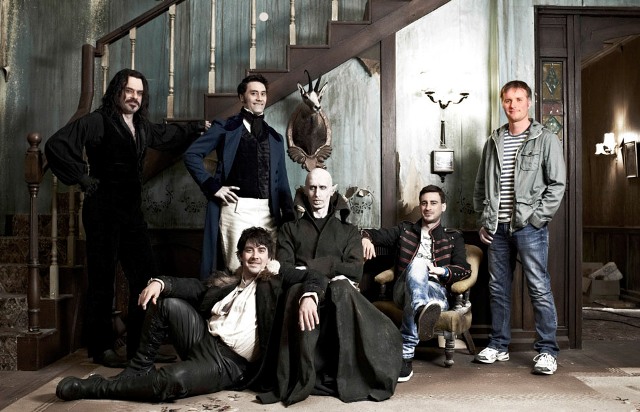 The vampires in Taika Waititi and Jemaine Clement’s What We Do in the Shadows aren’t exactly fearsome. That’ll happen when you’re forced to live with the only other vampires in town for hundreds of years — you may need human blood to live, but someone still has to do the dishes.

Waititi and Clement’s hilarious mockumentary turns the overplayed vampire mythos on its head. We spoke with Waititi, who also plays the foppish vampire Viago in the film.

Alex Rose: The film has a very deliberate documentary aesthetic — a little bit reality TV, a little bit Maysles. What were some touchstones and influences when devising this style?

Taika Waititi: We wanted it to feel as real as possible, while also being funny. The big influences were Christopher Guest’s films, and Spinal Tap and Bad News. The documentary influences were Anvil, Grey Gardens… and I haven’t seen any other documentaries.

AR: You’ve worked with Jemaine in the past, but this is the first time you’ve directed together. How does that change the relationship, and how was the task of co-directing split up?

TW: Because I had more experience with crews and directing TV and films, I would concentrate on blocking scenes and communicating with the crew, and Jemaine would explain to the cast what was happening in the scene and the direction to take the drama.

AR: The mockumentary format usually allows for a lot of improvisation, but in this case the film also has a lot of special effects. How much improvisation was there?

TW: There was about 92 per cent improvisation in the film, and about eight per cent technical, planned out and time-consuming scripted material.

AR: Vampires have become a pretty hot commodity since you originally devised the short film predecessor to this in 2006. Was there anything you had to steer away from as they’ve become too played out?

TW: We knew that our vampires would not be sparkly. We had thought of the idea for the film before Twilight existed, so our characters and vampires were always going to be the classic archetypes from the film world.  The characters’ influences were Interview With the Vampire, Coppola’s Dracula, The Lost Boys and Nosferatu.

AR: New Zealand movies aren’t widely distributed in North America, generally speaking. How do you feel about the current state of film there?

TW: Every five years, New Zealand makes really good films, and in between that, there’s usually only one. This year’s been a good year. The classic New Zealand film is dark and brooding — a kid dies, and there’s a family secret. This is the first New Zealand film ever not to do that. ■

What We Do in the Shadows opened in theatres on Friday, Feb. 13. Read our review here.