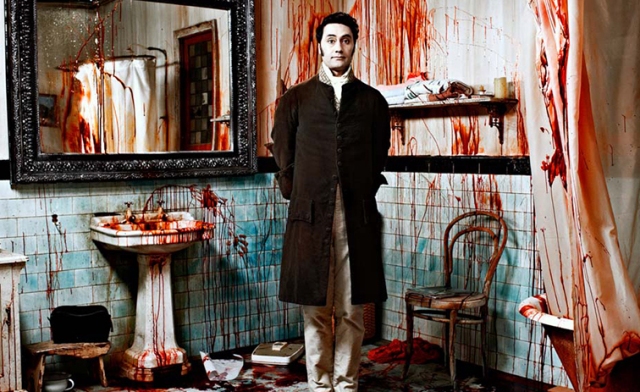 Vampires are extremely popular these days thanks to stuff like Twilight and True Blood. What these works forget is that vampires were more often than not historical constructions, bound not to swoopy haircuts, six-packs and skinny jeans but rather frilly vests and powdered wigs. If all goes well and no one succeeds at driving a stake through their hearts or feeding them a shish taouk against their will, vampires should also be ageless. And if society has taught us anything, it’s that most people stop keeping up with the trends by the time they’re 40, much less 600. That’s the central conceit of What We Do in the Shadows, a new mockumentary by Flight of the Conchords’ Jemaine Clement and his frequent collaborator Taika Waititi (see our interview with him here), which puts old-timey vampires in a Real World-esque living situation with surprisingly fresh results. As overplayed as vampires might seem, there’s (hundreds of years) of life in them still.

Viago (Waititi), Vladislav (Clement), Deacon (Jonathan Brugh) and Petyr (Ben Fransham) are vampires living together in a huge flat in the suburbs of New Zealand. Their lives mostly revolve around feeding themselves, though their personal peccadilloes vary.

A foppish dandy of around 300, Viago pines for the love of the one that got away before he could turn her into a vampire — a nonagenarian retiree who lives in a retirement home in the village.

Vladislav is more of a Casanova-type romantic vampire that nevertheless harbours deep trauma from someone he calls the Beast.

Deacon has to contend with their assistant Jackie, a human who runs errands for them in the hope that she will one day be turned into a vampire as well.

The Nosferatu-like Petyr, being 8,000 years old, is a lot less talkative. He mostly hisses.

Viago is the most responsible roommate and the most comfortable in front of a camera; he tries to get his roommate to clean the dishes to no avail, and details their lives as they try to pick up humans to feed on in the town’s bars and discotheques. Since vampires have to be explicitly invited in to human hangouts, they do very poorly.

Mockumentaries have changed subtly since reality TV has become so prevalent. The characters are no longer surprised and excited to see a camera, but simply acknowledge them as implicit in their lives as they are in the lives of the Kardashians or Snooki. The vampires in What We Do in the Shadows don’t have that luxury. Before they meet a nonthreatening IT guy named Stu (Stu Rutherford) that they inexplicably become extremely fond of, they don’t watch television or use computers, and their peculiar openness about their lives makes for many of the film’s best moments. It’s a surprisingly sweet movie for one that also periodically turns into bloodshed and carnage, thanks to likeable performances by the cast. Rhys Darby is particularly memorable as the leader of a werewolf pack — the Alpha, as it were, or the Darby version of an Alpha.

One criticism that’s been levied at the film is that it doesn’t have much of a plot. The film gears up towards a final event in the form of a big yearly ball for all manners of Kiwi monsters and undead, but it’s pretty formless in terms of plot. This raggedness serves the film’s humour, however, and it has a pleasantly ragtag charm about it.

If there’s anything to complain about, it’s that it’s too short. At 80 minutes and change, Clement and Waititi leave you wanting more. In fact, they make it difficult to write about the film in much detail, since so much of its delights are small character moments that are best left unspoiled. All of this makes What We Do in the Shadows a brilliant backdoor pilot for a show its creators may not plan to — or want to — make. But if they do, I’m there.  ■

What We Do in the Shadows opens at Cinema Cineplex Forum (2313 Ste-Catherine W.) today, Friday, Feb. 13. Watch the trailer here: