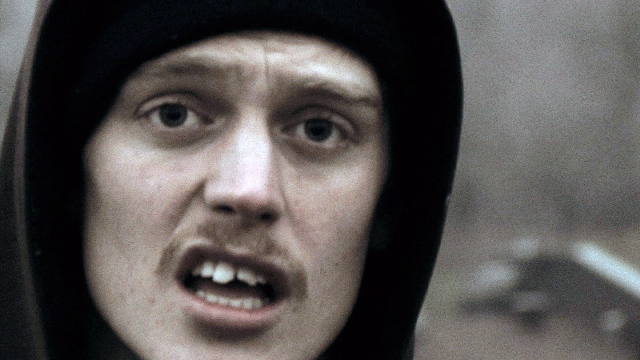 Sean Nicholas Savage in A City Is an Island

You might remember Timothy George Kelly, more colloquially known as Tim, as the Australian who occasionally invited Montrealers into his backyard to watch weird movies and drink lukewarm cans of Pabst. You might also remember him for his Big Small series: intimate video portraits of local musicians (or as he described it, champagne Internet cinema), including bizarro darling Grimes, before she hit the big leagues.

While Big Small looked at the individuals, his first feature-length documentary, A City is an Island, pieces them together to paint a bigger picture, an artful DIY tribute to the DIY Mile End music scene it depicts.

We spoke to him about it before its grand premiere at RIDM tonight.

RH: What first drew you to Montreal?
TGK: In 2008, I had never been in a city where it snowed. I’d only seen snow on mountains.  I knew nothing about Quebec. I had a $1,000 and a flight to the U.K. that I missed for a $300 a month room on St-Dominique and Mont-Royal. Summer came and we started Cinequanon, the free outdoor cinema. That lasted three or four years. This place just has something. People look you in the eye here.

RH: Your film focuses on the city’s music scene. As a non-musician, how did you fit into this scene?
TGK: Alcohol. Then Big Small. Then music videos.

RH: What is it about the scene that inspired you to make a film about it?
TGK: I made a film because no one else had yet. Seeing something that I thought was amazing and there not being a documentary about it seemed insane to my 23-year-old self. My brain is of the 21st century: pics, or it didn’t happen.

I joked in a Danish interview that it’s good that Harper did all these austerity cuts because it resulted in a Canadian not getting a grant and making this documentary before me. Somehow, a broke Australian with no idea about how to make feature-length film beat you to it. [Ed.’s note: This is not the first Montreal music scene documentary. Two films on the topic were released last year.]

RH:  How did you select the musicians you wanted to include?
TGK: Conversations with everyone I knew about who should be in it. Lots of real-talk with co-producer Patricia Boushel, who is basically my big sister here.

I went around one summer and audio-interviewed a bunch of different people as research, from this I made a list of people who represented different areas of the scene whether it be generational, language, genre, gender, geography and things like this.

I made a bootleg tape of Mac DeMarco toilet noises from this film and uploaded it to Pirate Bay. It has a pretty healthy seed ratio so the people downloading it must be good people.

RH: In the film, you touch upon certain socio-political realities in Montreal, mainly language issues. Was this your intention from the beginning?
TGK: It was always my intention, but few of the anglos would talk about it in the beginning, so I ended up having to come back and shoot more 18 months later. Young musicians get to live a pretty nice lower-middle-class life here and bang their drums and their Abletons and reminding them of the somewhat conflictual cultural environment they live in makes all this less fun. There is also a fear of sounding ignorant that I completely understand: artists know recorded media can cement what they say into the vault of forever, which exists everywhere now in this digitalized age, so avoiding questions about some of the heavier parts of identity in Quebec is something I empathize with. The francophones in the film were much more comfortable talking about this relationship between Montreal and ROC musicians.

RH: What are some of the reasons many anglo musicians move here?
TGK: It’s getting to the point now where I won’t call Montreal cheap, but compared to so many other places that are ridiculously expensive, it facilitates someone to have the time to experiment, think and make mistakes, which are all essential to anyone’s creative process. There also isn’t a major entertainment industry spotlight shining on people immediately, which is a good thing, it means you can fuck up and no one cares. Being allowed to fuck up is an important thing.

RH: You started this film years ago. Has the scene changed a lot? Do you see it remaining a kind of mecca for outsider artists?
TGK: There is one of those gyms on St-Laurent now where you can watch people working out from the street. That’s weird. The scene has gotten more experimental techno; Ramzi is a good example of this and everything is moving further north of course: Rosemont, Park Ex. This everyone knows. Silver Door has a different name.

As a whole, I would say it’s still relatively the same, but it’s more interesting what the first-wave ’90s people think. There was a real badass anti-capitalist thing with a lot of the earlier noise guys who built the foundation of the scene. It seems quite opposite to the OK Cola cynicism cliché of the North American ’90s to me. Now on what they built is quite a bit of sugary pop music that is unashamedly trying to be popular, but whatever, it’s just taste, I guess. If Casa still had a free-jazz-only policy, there just would have been another venue a few years later that let the Unicorns play.

The only thing the city really has to worry about is when Beaver Sheppard leaves or dies. That’s a paradigm shift right there.

And do outsider artists exist now the Internet exists?

RH: Why did you decide to move? Have a lot of musicians interviewed in your film moved as well?
TGK: Mac DeMarco is in Brooklyn and I guess Sean Nicholas Savage is spending more time in Berlin now. Spencer Krug also finally left I think. And yeah, I am in London.

I moved for a girl who I met in Montreal. I wasn’t going to London for London. I was following the best part of Montreal out of Montreal. Then the girl left and I was stuck with fucking London.

RH: What do you miss the most about Montreal? And what do you miss least?
TGK: We just flew in from CPH:DOX where the film premiered 24 hours ago. I’ve already had Patati Patata and Romados. I miss my friends. I miss the proximity of everyone and knowing when someone looks you in the eye on the street, it is with solidarity rather than suspicion.

I am mostly angry I missed the student protests of 2012. I moved to London three months before they happened. I was just watching on CUTV and Facebook. I missed something. That was history there. That was the city showing its true colours. You won, you fucking brilliant motherfuckers, you won. ■

Don’t miss the POP Montreal afterparty following the screening, with performances by Inside Touch, Country and Gambletron, and a DJ set by Cadence Weapon, 175 Président-Kennedy, 9:30 p.m., free