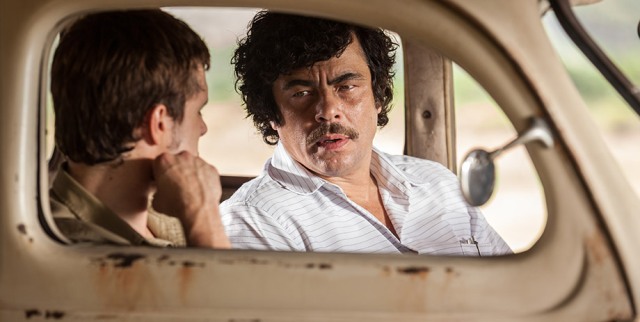 In my first report from TIFF, I expressed excitement about seeing Dan Gilroy’s Nightcrawler, the Jake Gyllenhaal neo-noir in which he plays a freelance crime-scene videographer. In this TIFF report, I should’ve talked about it – except I didn’t even end up seeing Nightcrawler, choosing instead to go off the beaten path and catch a couple of smaller films at critics’ screenings. Ultimately, I’m not sure the gamble paid off – by all accounts, Nightcrawler is terrific (you’ll see my colleague Radina Papukchieva’s take on it later this week) and the movie I saw in its time slot was less than stellar. Still, the wealth of choices available at TIFF means that no critic has the same experience and mine was certainly singular.

One thing that’s come up from my particular choices is that this year’s TIFF belongs to actresses. Until yesterday, I’d hardly seen a single male-dominated film with any memorable performances, while performances by Marion Cotillard, Reese Witherspoon, Gemma Arterton and Signe Babett Knudsen all seemed like potential award contenders (of course, if Peter Strickland’s softcore mindfuck The Duke of Burgundy wins any awards, the world will be a very different place). This changed on Day 3, when male performances were the best aspects of some of the films on hand.

It seems like Benicio Del Toro has been attached (or “in talks”) to play Pablo Escobar for damn near 15 years – the plan has finally come to fruition with actor Andrea di Stefano debut feature Escobar: Paradise Lost. Di Stefano takes the Last King of Scotland approach to biography by observing a fearsome, monstrous historical figure entirely through the prism of a fictional, impossibly generic white guy. Del Toro’s easily the best thing about Escobar: Paradise Lost but his lumbering, bear-like menace takes a backseat to the story of Nick (Josh Hutcherson), a Canadian surfer who moves to Colombia in the late ’80s and falls in love with a local girl (Claudia Traisac) whose beloved uncle happens to be drug kingpin Pablo Escobar. Di Stefano turns in a decent if by-the-numbers thriller that’s made even more disappointing whenever Del Toro isn’t on-screen. Hutcherson is hardly as charismatic as Del Toro but the film nevertheless rests on his shoulders for the duration of the bloody, brutal and startlingly predictable second half. Escobar: Paradise Lost is ultimately the last thing you’d truly want from that pairing of star and subject : a familiar “cartel thriller” given intermittent shots in the arm by a man given a supporting role in his own movie.

It’s painfully obvious from the very first minutes of Cut Bank that director Matt Shakman worships at the altar of the Coens : rural setting, idiosyncratic dialogue, eccentric characters and bursts of brutal, darkly comic violence are all at the centre of his debut feature. When you find out that Shakman also directed two episodes of the great Fargo mini-series and has cast three actors who’ve worked with the Coens (in Billy Bob Thornton’s case, multiple times), it starts to feel a little less like worship and a little more like a lack of inspiration. The story of a small-town lunkhead (Liam Hemsworth) who accidentally (or is it ?) captures the murder of a local postman (Bruce Dern) on video, only to see the entire town turned upside down by a mysterious recluse (Michael Stuhlbarg) looking for his long-awaited parcel, Cut Bank has a fantastic cast (which also includes Teresa Palmer, John Malkovich and Oliver Platt) but goes through its plot lifting beats indiscriminately from the Coens. It has moments (a late-film scene between Malkovich and Thornton plays like a masterclass in elevating bog-standard material) but Hemsworth is an unappealing lead and the film holds few surprises beyond its warmed-over Coen-lite aesthetic.

Xavier Dolan stretches his acting muscles in this Montreal-shot two-hander from Charles Binamé (Séraphin : un homme et son pêché, Cyberbully). The Boy Wonder plays Michael, a troubled, elephant-obsessed young man in a mental facility who is grilled by the hospital’s director (Bruce Greenwood) when a psychiatrist goes missing. It’s undeniably theatrical, with the action confined mostly to one room and only sporadically interrupted by a nurse (played by Catherine Keener) and Greenwood’s wife (played by Carrie-Anne Moss). Elephant Song skillfully avoids feeling stagebound thanks to Binamé’s precise, steely direction and the way the script (by Nicolas Billon, from his play of the same name) coils onto itself endlessly. There’s surprisingly little to it on paper, yet Billon draws remarkable mental calisthenics from the premise, working the characters into an admirably controlled frenzy. Dolan gives a showy but believable performance (shades of James Franco poke through in his whiny, manipulative but fragile character) and Greenwood does equally great work as his barely contained authoritative foil.

The Duke of Burgundy