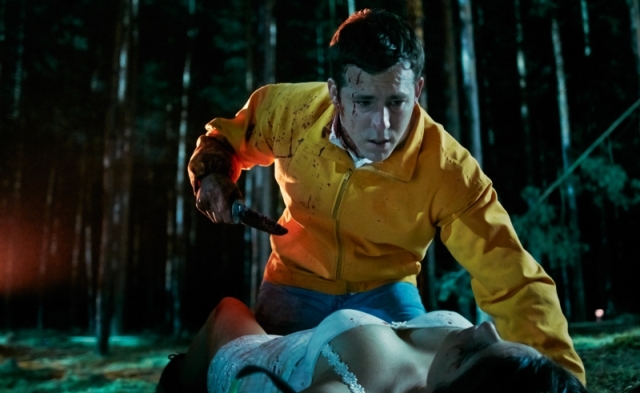 Ryan Reynolds in The Voices

It’s only been a day and I’m already starting to discern trends at this year’s TIFF. Complete lack of a music score is a big thing this year; only two of the movies I watched thus far (including previews) had what you’d call non-diegetic scores, and both Whiplash and Bird People didn’t have more than a couple of minutes total. Stark and naturalistic is apparently where it’s at this year, though it doesn’t exactly look like that trend’ll continue until the end of the fest.

The other thing that I hadn’t counted on was that the TIFF press screening schedule is packed to the gills; it’s very possible to walk in there at 8:30 a.m. and walk out at midnight having never seen the light of day. I find this rather masochistic myself, but four films in a day proved to be easier than I thought. If TIFF was an inspirational sports movie, I would’ve found heretofore unknown fortitude deep in myself and gone for a fifth, but I think I did all right anyway.

Pascale Ferran’s Bird People has a title that’s both metaphorical and very, very literal. This meditation on communication and sense of belonging in the age of convenience follows Gary (Josh Charles), a Silicon Valley exec who travels to France to close a big deal in Dubai and immediately realizes that his life lacks freedom, so he promptly decides to leave his job, his wife and his children for an uncertain, untethered future in Europe. Meanwhile, a maid at the hotel (Anais Dumouchet) turns into a literal bird for no reason and enjoys a freedom and closeness to the people around her she’s never known before.

Both characters attain a certain form of total freedom, you see, which is really the only reason their stories are told in the same ambitious but ultimately clumsy movie. Ferran frames Gary’s story in a very naturalistic way but it seems like it’s heading nowhere fast until it (loosely) ties in with Audrey’s story; conversely, the magical realism of her storyline seems forced and awkward after a 20-minute sequence in which Gary dumps his wife (Radha Mitchell) over Skype. Ferran certainly doesn’t lack vision and ambition, but Bird People fails to coalesce into a cohesive whole.

Very few people would have expected Marjane Satrapi to make a movie as demented as The Voices. Satrapi became known for her graphic novel Persepolis, which chronicled her childhood during the Iranian revolution. She co-directed the well-received film adaptation and then, through some kind of bizarre alchemy, she ended up making this pitch-black comedy about a serial killer whose cat and dog drive him to kill. Reynolds is Jerry, a disturbed factory worker who decides to stop taking his anti-psychotics because he prefers the bright colours, cheery outlook and murderous comments from his Scottish-accented cat Mr. Whiskers that the sober life brings. When he accidentally murders his beautiful co-worker, he finds himself in a violent spiral where the bodies just keep piling up. The thing that often ends up sinking black comedies is an inconsistency of tone — The Voices doesn’t have that. For what it’s worth, Satrapi keeps the film chugging along as a maniacal, blood-spattered sitcom that never becomes off-putting despite the decapitations and rotting body parts. It’s never quite a mile-a-minute laugh riot, but there’s something to be said for its consistency. This isn’t likely to be a crowd-pleaser, but I certainly admired the dedication.

Few films have delved into the physical hardships of being a professional musician as graphically as Damien Chazelle’s Whiplash. This story of a young Buddy Rich-obsessed jazz drummer (Miles Teller, in full Cusack mode) and the monstrous conductor (JK Simmons) who pushes him to inhuman lengths pulsates with the literal blood, sweat and tears that fuel the quest for greatness. Teller and Simmons are fantastic and the film is beautifully shot in shallow-focus, high-grain closeups that let us feel the characters’ every twitch and bead of sweat, but it takes twists and turns that should be immediately familiar to anyone who has seen an inspirational sports movie in the past. For all of its blood-spattered cymbals and R. Lee Ermey-style insults flying out of Simmons’ mouth, it proves to be a little disappointingly conventional.

French auteur Olivier Assayas basically makes two kinds of movies: conventional French dramas with small, human stories that win awards and play festivals, and dense meta-narratives (often starring American actors) that are often perplexing but play those festivals based on the strength of the first kind of movie. Clouds of Sils Maria generally fits into that second category. It’s the story of Maria (Juliette Binoche), an actress who got her big break in the filmed version of a two-character play by a noted Swiss writer. On her way to Zurich to honour him, she receives an offer to play the older character in a new version of the play against a young Hollywood starlet (Chloë Grace Moretz). Holing herself up in the Alps with her assistant Valentine (Kristen Stewart), she begins to work obsessively on her lines as the play becomes indistinguishable from her relationship with her assistant.

It’s a dense, smart film that has little time for audience pandering; if you lose track of it for even a second, you’re bound to spend the rest of the film lost. It’s the very opposite of a crowd pleaser like Whiplash. Binoche is riveting, but Stewart is even more impressive in a role that makes you all but forget the twinkly vampire crap that made her famous. Clouds of Sils Maria is dense and not very rewarding upon first viewing, but it certainly isn’t like anything else I’m likely to see at TIFF (or elsewhere, for that matter).