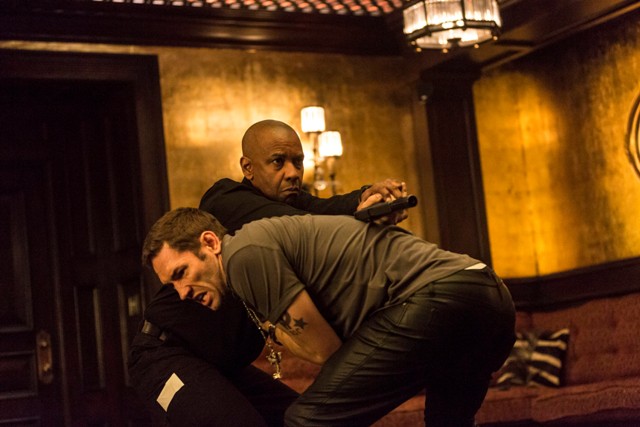 Denzel Washington in The Equalizer

I have kind of an inexplicable soft spot for post-Death Wish Charles Bronson vigilante movies and their ilk. They’re not good, exactly; they’re always the same, for one, and they never hold any real surprises (though sometimes you’re treated to something like the sight of old man Bronson twisting a dude’s dick off in a tropical paradise), but the sameness and singularity of purpose they all have makes them weirdly compelling. You’d think that the recent spate of old-man revenge thrillers that have popped up in the wake of Taken’s runaway success would hold that same appeal, but films like Antoine Fuqua’s The Equalizer take all the fun out of indiscriminately murdering sleazy-ponytailed Europeans. They’re what happens when an actor inevitably ages out of being a viable romantic, Everyman lead before they age out of being a big star entirely — violent, broody and resplendent with the stink of, “I can still do this, you know.”

Robert McCall (Denzel Washington) is a middle-aged man who lives in a spartan apartment in Boston and works in a Home Depot-type store, dispensing diet advice and jokes about Gladys Knight to his co-workers. He spends his every sleepless night at a diner, drinking tea he brought himself and reading books everyone already knows the endings to. After striking up a friendship with a teenage prostitute named Alina (Chloë Grace Moretz), he shows up at the diner to find that she has been brutally beaten by her greasy pimps. Something snaps in Bob McCall, and this seemingly boring man is revealed to be a retired CIA operative who sets about righting wrongs in the community. He begins by taking out five high operatives of the Russian mob (it’s always the Russians), which then sends a psychotic enforcer (Marton Csokas) to Boston to clean things up. From then on, it’s scene after scene of McCall brutally taking out dudes in suits.

McCall is a cipher of badassery, a perfectly regulated and stone-faced Alpha male who never shows remorse or emotion (at one point, he’s covered in water from setting off the sprinklers with an explosion, and we’re to believe that the water on his face are the closest he’ll ever come to tears) in his perversely methodical way of dispatching bad guys. Washington’s natural charisma disappears behind his steely glare and practical psychopathy — never has the “normal guy pushed to the brink” seemed less convincing. Unlike most protagonists in the genre, McCall has no family to avenge or protect- he just has a vague friendship with a young girl who spends the entire movie in the hospital, making his single-minded quest for justice seem even more insane. He’s not fuelled by grief — he’s fuelled by opportunity.

In spite of all that, The Equalizer comes off as profoundly goofy. McCall seems determined to achieve the majority of his 100+ killings without the use of a gun, so some sequences play like a bloodier Home Alone sequel, with bearded Russians getting shot in the nads with nail guns and microwaves exploding to-and-fro. Clocking in at an absurd 131 minutes, The Equalizer has plenty of time for McCall’s side projects, such as following a guy who robbed the home-improvement store and bashing his head in with a hammer or travelling to the Hamptons to have some soup with CIA director Melissa Leo and her husband Bill Pullman. History has shown that this kind of movie works exponentially better when it’s kept tight, but The Equalizer spits in the face of convention and makes its entire second act minute variations on the same scene, played over and over again.

Fuqua seems intent on keeping the damn thing going for as long as possible, lapsing into slow-motion every five minutes and preceding every scene change with at least two skyline shots of Boston (in case you forgot where you are, I guess). He at least has the common sense to make the action scenes brutal and to the point, but there are so goddamned many of them in a row that they begin to lose all meaning.

The Equalizer is based on a TV show from the ’80s that seems to have been exhumed not for its popularity but rather for how easily it could be retrofitted into a Liam Neeson movie starring someone who isn’t Liam Neeson. It’s almost certainly going to be a hit and sequels are inevitable, but weirdly, I’m sort of hopeful. If the repetitive carnage and gratuitous harpoonings are dialed down about halfway, there’s potential for a trashy series that’s not also brain-numbing. Based on this first installment, though, the sequel will probably see Washington decimating the entire IRS with a shovel for auditing a recently widowed small-business owner. ■

The Equalizer is in theatres now