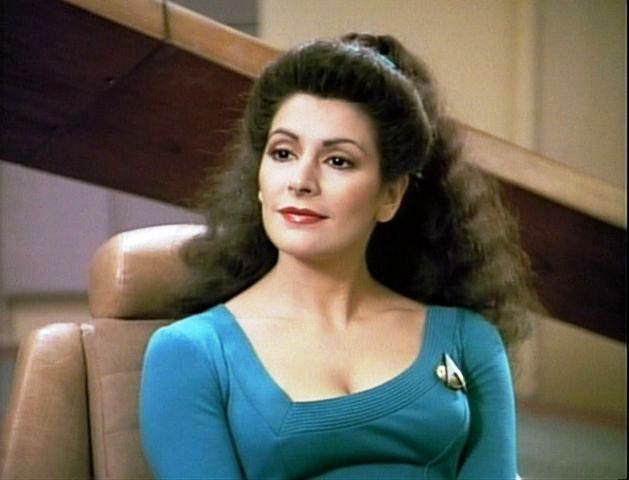 Anyone born after 1985 should stop reading here — this won’t interest you. From 1987-1994, Star Trek: The Next Generation (or TNG) was seminal sci-fi TV viewing. Other than Dr. Who and Carl Sagan’s original Cosmos series, science didn’t have much of a place on the boob-tube back then. TNG was kind of a big deal, giving hope to our planet through their visions of a united humankind. This space soap opera kicked hedonistic competitors like Dallas and Dynasty to the curb, with holodecks, lasers, hyper-spatial voyage and alien race relations.

Natalia Yanchak: How you feel as a woman in the sci-fi world, specifically cast as one of the essential crew members of the USS Enterprise?

Marina Sirtis: Bear in mind that sci-fi, at the end of the day, is action/adventure, so by its very nature it’s more skewed toward boys than girls. After saying that, however, Star Trek has always been at the forefront of [equality]. Nichelle Nicholls from The Original Series, not only was that groundbreaking because she was a woman, and she was on the bridge as a regular character, but she was a black woman, on the bridge, as a regular character in a sci-fi show. Gates [McFadden] and I were in the caring professions — she was a doctor and I was a psychologist — so it made me sad when Denise [Crosby] quit the show, because she was security chief, and it would have been really cool to have a female security chief. People sometimes forget that because the show is set in the future, they think it is written by future people, but it’s not written by future people, it’s written by people now, with all their hang-ups and all their bigotries and, you know, all the bad stuff as well as the good stuff.

NY: And written for an audience that has all those characteristics as well.

MS: Our geeks are really forward-thinking, generally. That’s the good thing about the technological age is that the people who are at the forefront of it are very modern people, and so that’s wonderful.

NY: Let’s talk about the Internet and the Haters. I saw that you’re on Twitter (@marina_sirtis) and you very readily engage with anyone who has something to say.

MS: I find a lot of people in my profession don’t express their opinions about things because they want to be liked; they don’t want to ruffle any feathers. I have never cared about that, to be honest, I’ve never cared what people thought of me. I know who I am, I know what I stand for. And the people who hate me or the people who disagree with me or the people who write vile things to me on Twitter — it makes me laugh, because I don’t care. These aren’t my friends, these aren’t my family, these aren’t people that I’m going to hang out with. And at the end of the day, I’m with Voltaire: I may not agree with your opinion but I will defend to the death your right to express it, so, um, knock yourself out, really.

NY: Do you think in recent times there’s been a resurgence in interest in science fiction?

MS: I don’t think it’s a resurgence, I think it’s just been growing exponentially since [TNG] was on the air. When we started, sci-fi was alternative entertainment. Now, it’s number one at the box office every week: it’s sci-fi, sci-fi, sci-fi. I’m going to pat ourselves on the back and say that TNG was partly responsible for the surge in interest in sci-fi, because we had people watching our show who never liked sci-fi, they just liked our show. The total atmosphere, the business has changed. Gone are the days of Forrest Gump…Forrest Gump probably wouldn’t even get made if it was taken to a studio today.

MS: It would be Forrest Gump in space.

NY: About the Star Trek: Engaged event, is this something that is on tour or is it exclusive to this edition of Comiccon?

MS: We did it for the first time — what we call our reunion tour — in Calgary [in 2012] and it was so successful, we said we should do this everywhere, because obviously it’s something that the fans want to see. It’s wonderful, [and] the fans love it, they love to see us all together, because they’ve heard for nearly 30 years that we all loved each other and that we all got along [and] when they come to see us on stage all together, and they see it with their own eyes, they believe it. I think we’re pretty much the only show ever in the history of Hollywood that after 27 years are all still best friends. The whole cast. Not a group of two or three there or two or three here. All seven of us love each other to death, look out for each other and enjoy each other’s company. In fact, generally, we don’t bring our significant others because we don’t want them around. We want to hang out with each other and misbehave. ■

For the big nerds, a longer version of this article, as well as a downloadable podcast of the entire interview, is available at the author’s website