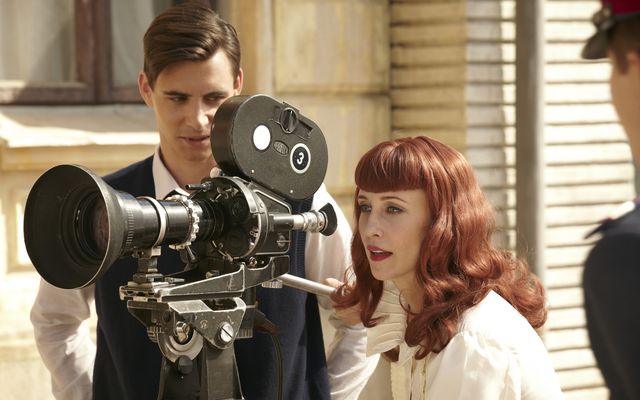 Vera Farmiga in Closer to the Moon

Despite its slowly-fading profile, the MWFF still programs some interesting and provocative cinema every year. Here’s a rundown of the big titles screening during its 2014 edition, which begins today, Wednesday, Aug. 20, and runs through Sept. 1.

The fest opens with Claude Lelouch’s Salaud, on t’aime, starring Johnny Hallyday and Sandrine Bonnaire. Lelouch is about as productive as Woody Allen and about as consistent in terms of balancing quality and lazy throwaways, but it did get positive notices upon its original French release in April. Much less productive than Lelouch is Christopher Ashley, following up his 1995 debut Jeffrey with Lucky Stiff. Best known as a stage director, Ashley directed the landmark AIDS indie film nearly 20 years ago and is finally following it up with this musical comedy featuring the late Dennis Farina and Jason Alexander.

Pupi Avati is probably best known for his work in the realms of exploitation and horror (his giallo The House With Laughing Windows is well-regarded by people better versed in the genre than myself) in the ’70s, but he’s worked consistently in a variety of genres in Italy for over 40 years. His latest film, Il ragazzo d’oro, stars Sharon Stone.  Also screening is The Mafia Only Kills in Summer, a mob comedy that marks the debut of celebrated Italian TV personality Pif (who appears to be some sort of Narduwar / Billy Eichner type man-on-the-street irritant, though the trailer shows that this is mercifully not the conceit of the film).

Robert Guédiguan traditionally makes grittier personal dramas in the Cassavetes mold, but his latest film Au fil d’Ariane sees him exploring more fanciful and colourful comedic ideas. Also departing from his traditional output is Romanian director Nae Caranfil. Although Closer to the Moon remains in his wheelhouse of black comedy, he’s working in English for the first time with a cast that includes Mark Strong, Vera Farmiga and Allan Corduner.

Kyrgyzstan is most certainly amongst the least-represented countries on the world cinema scene; knock one off the bucket list with Kurmanjan Datka: Queen of the Mountains, a period epic that’s also the most expensive film ever made in Kyrgyzstan. Out of Poland comes Jack Strong, a WWII drama about a spy who sold secrets to the Americans as impending martial law was declared. Patrick Wilson (Watchmen, Insidious) appears in a supporting role.

CanCon is surprisingly light this year; although the shorts programs are stuffed with Canadian films, there are only a few features screening. Comedies Ben’s at Home (directed by Mars Horodyski), When the Ocean Met the Sky (directed by Lukas Huffman) and My Ex-Ex (directed by Nathaniel Walsh) and dramas Sweeping Forward (Patricia MacDowell), For the Love of Poe (Nils Oliveto) and Primary (Ross Ferguson) make up the entirety of the Canadian fiction line-up, while Dan Zukovic’s con-man comedy Scammerhead is the only Canadian feature in competition.

The fest closes out with the late Alain Resnais’s swan song, Life of Riley (Aimer, boire et manger). The legendary French filmmaker died three weeks after it premiered at the Berlin Film Festival, where it was generally positively received as a light-hearted and fun movie from the guy that gave us such (culturally immortal) bummers as Night and Fog and Last Year at Marienbad.

As I said in my op-ed about the festival, quantity is not the major problem facing the MWFF. What I’ve done here is barely scratch the surface of what’s available out there in the next week or so. While the MWFF doesn’t do a great job publicizing the treasures they may have, they do offer you an opportunity to gamble on their programming. Who knows what you’ll end up with. ■

To see the complete MWFF program, go to the festival’s website