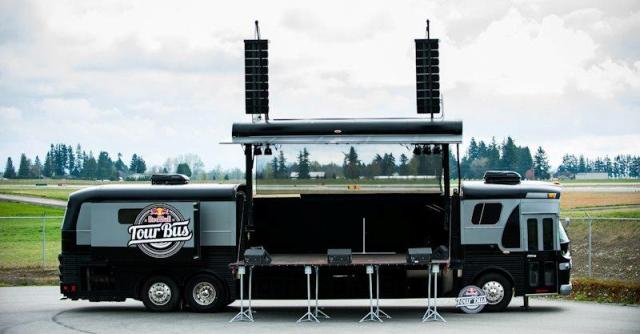 This afternoon, Red Bull’s transformer tour bus is pulling in to town to mount a free show starring local bands Young Galaxy and Plants and Animals, alongside DJ F.U.N.K. (#1 Best Club DJ in our Best of MTL readers poll). The show is happening somewhere in the Old Port — RSVP for entry & location details here.

The music is of course the main draw, but the bus/stage itself is a sight to behold. I spoke to the operator of the “Frankenbus,” which has been on the road since November of 2012 (mostly in the warmer months), about what it’s made of and how it works.

“The frame comes from a freight liner motor coach, the front end is from a mid-’60s GM transit bus and the back end is from a late 50s city-tour bus,” Robbie Aggas explains. “They put these three pieces together to make this monstrosity.”

Aggas rides alongside the driver in the bus’s only passenger seat, travelling from city to city to pick up hometown bands and play in public spaces ranging from festival grounds to parking lots to public parks to mid-town intersections. The 19 x 16-foot stage may not be able to accommodate sprawling orchestral pop bands, but is totally suitable for your average rock band.

“We’ve had a couple of seven- and eight-piece bands up there, and it starts to get a little crowded once we’ve got the headliners’ gear plus three openers’ gear up there on top of the nine people in the opening bands. But it’s not a small stage by any stretch, either. Most bands are pretty comfortable playing up there and they enjoy it. There’s even two leather couches in the back lounge.”

CATCHING UP WITH PLANTS AND ANIMALS

We haven’t heard a peep from Plants and Animals lately, as they’ve been alternating between family time and making a new record, following their third LP The End of That. I spoke to the band’s drummer Matthew Woodley (a former co-worker at the Mirror, incidentally) about how the record is coming along:

“We’re sorta working the same way we did with Parc Avenue, our first album, which is often the one that people like the most,” he says. “But that’s not why we’re doing it this way again. We’ve just found through trial and error that this is how we work best.

“With the last record, we wrote a bunch of stuff and thought that we could book a studio for two weeks and go in and execute it, the more traditional kinda way — we’re no good at that,” Woodley admits. “To make things worse, we booked a studio in France so we only so much time there. By the time we finished those two weeks, we weren’t really satisfied with what we’d done but we had to keep moving forward and make it work as best as we could. After that, we decided we need to work more organically.”

And so the forthcoming album has been recorded and engineered in-house, when the mood strikes, with plenty of time for revision, over the last two years. The goal is to wrap it up in the fall. “We’re having more fun and we’re happier doing this than we have been in a long time.”

As for the Red Bull show, Plants and Animals isn’t a band that fully embraces the whole corporate thing — Woodley says that turning down an extremely lucrative offer from McDonald’s was an incredibly easy decision — but ” dusting off the gear” for this concept, at this time, feels totally fine by them.

“It’s free and it’s nice to play for people outdoors in the afternoon in the summer. So why not? We’ve really been in the shed, as it were, working on this record, so to roll up and set up in our hometown on a Saturday afternoon is pretty refreshing.” ■