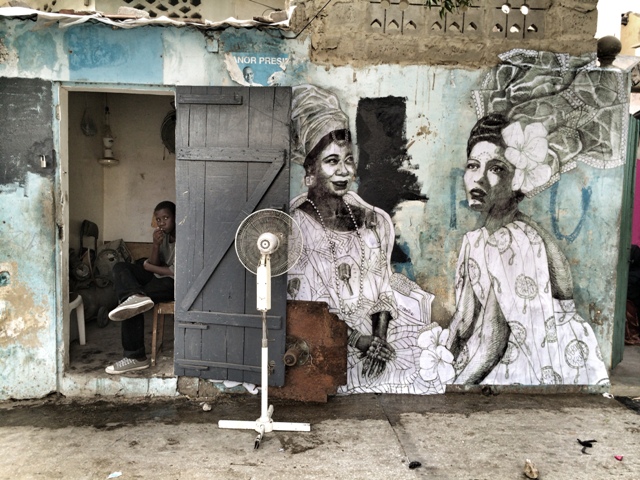 The MURAL public art festival is back for another round of beautifying the Main with murals from 20 local and international artists, June 12–15.

Over the course of the next four days, pedestrians will be able to walk on a closed-off St-Laurent boulevard and take in live mural-painting, visit art exhibits, see performances and play games presented by the art-world’s A-list as well as its rising stars.

Curated by artistic marketing agency LNDMRK, MURAL is the first public art festival of its scale to blossom in Montreal. Although the city has hosted other graffiti- and street-art festivals (like the annual Under Pressure graffiti convention in August), MURAL’s genius lies in balancing serious taste and an appetite for fun, attracting both art-lovers and more casual participants to attend the festival. Last year’s event did so en masse, pulling 800,000 visits in just four days, and winning the Grand Prix du Tourisme for the Montreal region in its category.

PARTIES
The MURAL crew also throw a damn good party. To fete the festival’s opening on June 12 is a Block Party presented by Montreal Electronic Groove (MEG) from 5–10 p.m, followed by the official MURAL opening party by Saintwoods (the guys behind SuWu and Apt. 200), SJU and Neon at SAT (1201 St- Laurent, 10 p.m., $30). On Friday, June 13, DJs including Ryan Playground, Grandbuda and High Klassified spin all day at the Saintwoods X Mural Block Party from 1–10 p.m., followed by the return of the Osheaga Block Party on June 14. Note that all of these block parties are happening at/near St-Laurent and Prince-Arthur.


GETTING AROUND
Just walking around St-Laurent during MURAL will give you a good idea of what the festival has to offer, but if you’re dead-set on seeing every piece, check out the festival’s map of walls and art zones, posted here. If listening and learning is more your thing, local artist Cam Novak is offering his walking and biking tours once again, by popular demand.

ARTISTS
There’s something for everyone in this year’s MURAL roster, whether you’re into cartoonish, clean characters by French collective 123klan, sober, line-heavy compositions by Italian artist 2501 or mind-melting graffiti-style pieces by Montreal’s own SCANER.
Of note this year is the increased visibility of female artists, from local graffiti long-timer Zema to France’s playful Kashink and globe-trotter Miss Me. There will be the lifers, like Montreal art legend Zilon, as well as more newer art stars like wheatpaste-based Stikki Peaches.

Here’s a preview of three local artists who are doing things a little differently this MURAL festival:

Miss Me
The Switzerland-born artist has called Montreal her home for a few years now—that is, when she’s not pasting her iconography-inspired portraits of pop-culture greats like Miles Davis and Billie Holiday around the globe. Her medium, wheatpaste, departs from the traditional brick-and-paint base that MURAL has established for its artists. Because of their fragility, her pieces may be around for a limited time, but she’s okay with that: “For me, it’s okay when my pieces get destroyed. It’s like mandalas: they’re beautiful and there’s satisfaction, and then they’re gone.”


Mathieu Connery
Although you’ll probably be looking up several storeys to get a glimpse of most of the MURAL festival’s art pieces, Mathieu Connery’s paintings are a little more down-to-earth — literally, as he’s taken on his MURAL pavement-painting project once again this year. His geometric pieces pop with high colour contrast, and if you think there’s something a little kiddish about them, that’s exactly the point: “I’m inspired by games, like children’s games painted on schoolyard pavements. My pieces don’t have set rules — so they aren’t really games — but I invite people to walk on them and interact with them all the same.”

Bryan Beyung
There’s charm in being unafraid to shine, with bright red streaks, with sparks of gold, with raging bulls and colourful explosions. It’s appropriate that Bryan Beyung keeps painting bulls into his artworks, because he’s got a bit of a toreador’s flair with a paintbrush or a can, and his live painting will definitely keep you guessing until the last minute at what the final product will look like. You do get a few leads, though: “One thing I’m pretty sure about is that I’d like to pay homage to the Portuguese heritage of the Main, maybe with a toreador or a bull. There’s a lot in the bull — it’s the symbol for Wall Street, it’s powerful, it’s money, it’s greed.”

MURAL runs June 12–15. For a full schedule of events, including a map of murals, go to the festival’s website