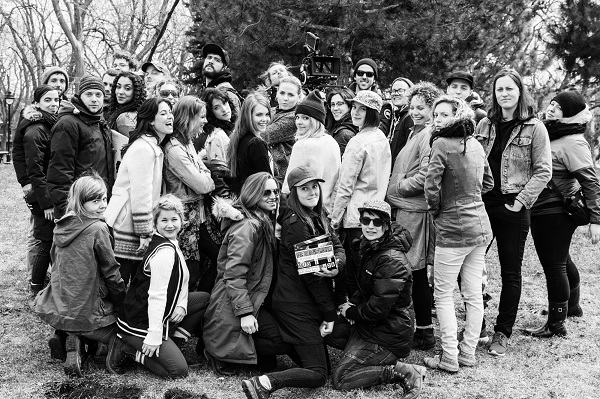 The cast and crew of Féminin/Féminin

The first season of the series, directed by celebrated local director and LSTW co-founder Chloé Robichaud, will finally be released this month, so we had a chat with LSTW founder and president Florence Gagnon about the show and what we can expect from the first season.

Kayla Marie Hillier: How was the response to the pilot episode?
Florence Gagnon: The response was great! It’s been above and beyond our expectations. It reached so many countries — from the United States to France and Australia, and many other parts of the world. With more than 100,000 views on the pilot, we wanted to shoot again and pursue our mission: changing the way people see lesbians. The community was happy with the result and the larger public, too. We felt everybody wanted more right away and we had to make it happen.

KMH: When did you start filming the rest of the season?
FG: We started filming three months after the pilot was released. April was a crazy month! Intense, but really fun. We had the best team and that’s why we’ve been able to shoot everything we needed for the first season. It really has been an amazing experience.

KMH: Can you tell us anything about the series without giving away too much?
FG: We really want to show our day to day reality, to show some positive role models. We’re really proud of the result of our efforts and we hope that our viewers will recognize themselves in the series. We did our best to cater to as many people as possible but certainly, having only one season, we had to make some choices. It’s such a stimulating and motivating project and we really did launch the series for the community. There are some surprises that I can’t reveal but I can confirm that there are some great moments throughout the seven episodes.

KMH: Will there be a season two?
FG: We would love to do a second season. It’d be great for the community, the team, and the entire LSTW gang, but financing the project is the big issue. Everything depends on the what happens with this first season! ■