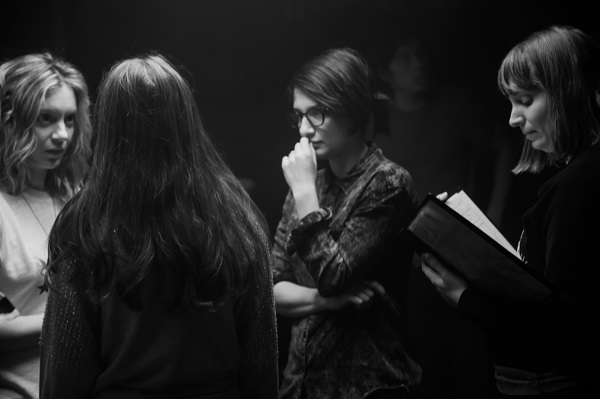 Chloé Robichaud on the set of Féminin/féminin

As any lady who loves ladies knows, there really is a lack of realistic programming that caters to lesbians. We’ve been given The L Word, followed by The Real L Word, Glasgow’s Lip Service, a few dedicated episodes on shows like ER and of course, let’s not forget the phenomenal Orange Is the New Black — but overall, there’s a definite dearth, and what we are given can be riddled with stereotypes. Enter Lez Spread the Word.

The local community-based lesbian-centric website caters to the interests of its members, highlighting what’s significant to the lesbian world. And now, with the help of LSTW co-founder, celebrated director Chloé Robichaud, they’ll have their own TV show.

Yesterday marked the premiere of the first episode of the webseries titled Féminin/féminin, starring Eve Duranceau, Noémie Yelle, Eliane Gagnon and Carla Turcotte. So I had a quick chat with LSTW founder and president Florence Gagnon and Robichaud about the series.

Kayla Marie Hillier: Why did you decide to make a webseries?
Florence Gagnon: About two years ago I met Chloé in a bar — we were studying at Concordia,I was in photography and she was in film production. I knew her work and I’d always wanted to do something for lesbians because I can remember at 19 coming out and lacking role models. The community was surrounded by stereotypes; I just wanted to have new portraits of girls. A lot of people talk about how it’s difficult to come out — I wanted to have positive stories. They can really help.

So we started Lez Spread the Word two years ago and then I started to think that we should really do a TV show. I thought that the community would really appreciate it. We started to raise money online and we’ve reached almost $8,000. We had to wait because Chloé was really busy with Cannes — but we shot the first episode in October. And since the community has been waiting for a year, we decided to launch it quickly, but the rest should be done by June

KMH: What was most important to you when creating the series?
Chloé Robichaud: Florence wanted to show lesbians in their everyday life. We often hear about the consequences of being gay, how it can be hard. We wanted to show that it’s cool, it’s okay, it can be fun. I thought that was interesting, and I started writing scripts for Florence.

We wanted to avoid stereotypes and just show the reality that we know as lesbians; what we see with our friends. Of course there has been The L Word and other series, but we did our thing. Something that’s really realistic.■

Check out the first episode of Féminin/féminin below and you can check out Lez Spread the Word here.