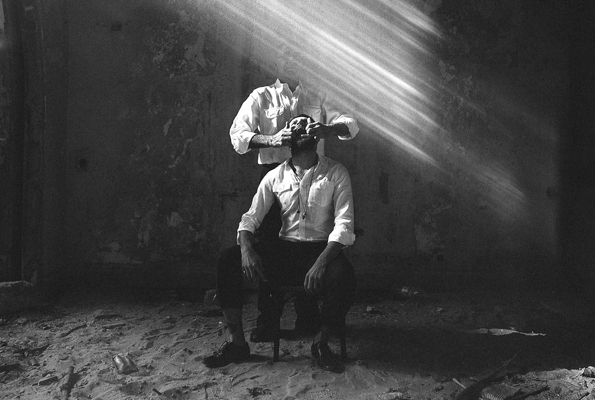 For their 30th edition, the organizers of the FIMAV festival in Victoriaville reached back throughout their archives to assemble an all-star program, but rather than just bring in big name performers who have been on the world stage since the ’60s, they made sure to balance the schedule with plenty of young artists from Quebec, including Montreal’s Jerusalem in My Heart.

Jerusalem in My Heart is a unique multi-media performance project led by Radwan Ghazi Moumneh, a convergence of contemporary Arabic and electronic musics accompanied by “light-based (de)constructions of space.”  JIMH sets out to mine the relationship between music, visuals, projections and their audience, with no two performances being alike.  Launched in 2005, it wasn’t until last year’s Mo7it Al- Mo7it on Constellation Records that JIMH appeared in recorded form. Though always led by Moumneh, the line-up has varied from solo performances to up to 35 additional musicians. Subsequent touring of Europe following the record revolved around the trio of Moumneh, Jeremie Regnier and visual artist Malena Szlam Salazar.

Jerusalem in My Heart recently began a short Canadian tour which will end with a performance at Montreal’s Suoni per il Popolo festival in June, including a special performance at Victo this Friday. This tour marks the inauguration of a new creative phase for the project:  Moumneh will perform alone, accompanied by visual projectionist Charles-André Coderre (though you can expect a few guest performers at the Montreal show). The duo will manipulate 16mm and 35mm projections to keep the space in constant flux, accompanying Moumneh’s reverb-drenched vocals and various traditional and electronic instruments. Regardless of the size of the band or the space they’re playing, JIMH sets out to “occupy a space in the best way we can, in setting up our visual component to create a mesmeric ambiance that can hopefully connect with an audience.”

Moumneh is deeply enmeshed in Montreal’s music scene, as co-owner of the Hotel2Tango analogue recording studio in addition to serving time in other bands including Pas Chic Chic and Sam Shalabi’s Land of Kush. After eight years of JIMH performing once or twice per year, the time finally came for Moumneh to challenge himself with new audiences. He feels that “to a certain degree, I wasn’t presenting work to a Montreal audience that was a challenge, be it culturally or politically. The standard was set for what I did and I felt like I was often meeting people’s expectations and whatnot, which didn’t sit right with me. The idea of bringing this performance to an audience that has no ‘history’ with me simultaneously scared and excited me.”

As a Lebanese national who grew up in Oman and has lived in Canada for over 20 years, questions of Arab identity are at the heart of Moumneh’s work. “I’m mostly in the circle of experimental, post-rock, indie-whatever tour scenes, and these are not the circles where an Arab has a voice.”

Moumneh’s interest in the cassette culture of Syria is well documented, and the particular aesthetic of these tapes, a “blown out” sound of overloaded recordings and excessive echo effects, influenced the sound of Mo7it Al-Mo7it. There’s been quite a bit of discussion about this sort of music since Syrian wedding singer Omar Souleyman was marketed to Western audiences and championed by pop stars like Björk.

“The music had to become ‘cool’ in the West in order for it to become cool in the Middle East,” which raises complex questions about how music in commodity form travels across cultures. We may trust the good intentions of Alan Bishop and his Sublime Frequencies label, but there is a valid critique in the way promoters and the media have marketed Souleyman’s records.

Souleyman will also be performing at the Suoni festival next month, and so I asked Moumneh his opinion on this recent hipster fascination with this music. “It is a delicate subject, as for the most part, people in the West issuing these records are doing it out of a genuine love for the music. Yes? Problem is, how is this then marketed on one level, and on another, how is it disseminated, and turned into an exotic flavour of the moment via various online musical outlets with such amateur writing and gross politics, and not taking any journalistic responsibility in truly understanding what it is they’re writing about. It’s not the Bishops of this world who are pulling these strings, and neither is it the Souleymans. They are just artists trying to make a living in doing what they know how to do.”

Around the time that Souleyman was finding an audience in the West, Mark Gergis also compiled a compilation of Syrian Dabke music which places the genre in its broader context, music that is mostly looked down upon in the Middle East.

“This is just but one of many layers of classist and racist mindsets in any post-colonial culture. It’s seen as music that is made by the lower class, by Kurds, by Turkmanis, by Shia, by Bedouin, etc. It’s never what you’ll hear in downtown Beirut. Never. Except… that you WILL hear Mark’s record, because Mark put it out! Not because it’s good — it of course is! An actual tape of the same music that was made on a dubbed tape or a vcd, will never be played, as the context of it is such that it is frowned upon. It’s like an expensive wine served in a dep wine bottle that can’t be appreciated because of context.” ■