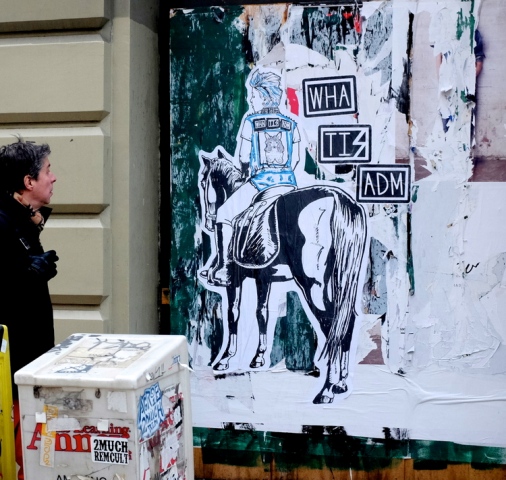 Work by Whatisadam in NYC

The tag in your collar, the mermaid on your coffee cup and the logo on your bag all ask: what are you? In a consumption-based culture, what replaces who. The scenario seems sinister, but for local street artist Whatisadam (voted #5 Best Graffiti Artist in our 2014 Best of MTL readers poll), leaving personal identity behind is part of the fun.

Preferring to keep his name and identity a secret, Whatisadam riffs on consumer products and cultural icons in a twisted homage to the Canadian experience. Iconic maple syrup cans from cabane-à-sucre trips are transformed into Maple Sizzurp wheatpastes, alluding to childhood nostalgia in the same breath as cough-syrup cocktails. Lovers from disposable pulp novels become plaid-wearing bandits on the run. In a recent installation piece, feather-trimmed arrows jut out of building walls.

“I’m very inspired by North American elements that are part of our culture—the wilderness, scenery, branches, deer, the natural elements but also the feminine aspects of nature” says the artist, who hit the streets of New York with wheatpastes of punkish women on horseback for Armoury Arts Week this March. “I want to keep spreading that imagery wherever I go.”

As the imagery evolves, so does the medium. Although he is best- known for his 2D wheatpaste and illustration work, the artist recently submitted a sculpture to the Memento Mori art show organized by aerosol artist Omen at the Station 16 art gallery.

It’s a red, reclining, dead baby pig. Cast from a real pig and made of cement and silicone, “Canadian Bacon” is not for the squeamish, although the Tussaud’s-like treatment of the humble Canadian pig is appropriately tongue-in-cheek for the nature morte-themed exhibit.

What’s next for Whatisadam? His recent work for Osheaga, a teaser image with band names from the roster hidden in a Montreal-inspired street-scape, his cover for Cult MTL‘s Best of MTL magazine and his work at local restaurant le Bremner whets the appetite for more bright, fine-lined illustration. But the artist has other things in mind. He’s currently working on a new street art installation series using sculptures of his big-tittied deer-woman Roxy. Be on the lookout for her, star pasties and all. ■