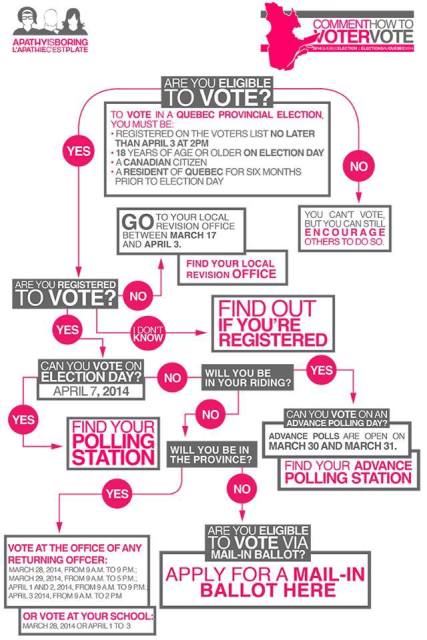 How to vote, c/o Apathy Is Boring

The spike was attributed to the Maple Spring student movement, which politicized hundreds of thousands of young people in the province and got them talking face to face about voting, one of the most effective ways to push youth to the polls. But without such a unifying cause in this election, which has been dominated by old ideas and old people’s concerns, will turnout plummet back to the norm?

“The high 30s is pretty much the standard in Canada, whether it’s at the provincial level or the federal level,” says Youri Cormier, executive director of Apathy Is Boring, an organization that aims to educate youth about democracy. There are a number of reasons for these low numbers, and they aren’t all about apathy.

“It’s very difficult for youth in Canada to vote in general because we move a lot and we don’t always have the right identity papers,” he says, alluding to this election’s voter disenfranchisement scandal. “We’re not home-owners in our 20s, like our parents were, and we’re much more likely to leave our hometown to go to university. With super-high rates of unemployment, youth are also travelling far and wide to get to their first job.

“The good news is that the prospects are that voter turnout will stay a little bit higher than the high 30s ’cause voting tends to be habit-forming. If you vote once, you tend to vote more later in life. Try it — you’ll like it. There’s my slogan.”

With youth making up one third of the electorate in Quebec, and given the last election’s incredibly high youth turnout, it’s surprising that issues like education, student debt, unemployment and climate change (ie. the future) were barely mentioned in the campaign.

“Politicians are not known to be risk-takers,” says Cormier. “They don’t cater to the youth vote because they don’t know if the youth will show up to the polls and they don’t know who they’ll vote for if they did. There’s a little bit of fear, and it’s misguided ’cause it’s actually been shown in a lot of research that youth tend to vote like their parents.”

The consequences of sticking with the status quo — both on the part of youth who can’t be bothered to vote, of parents who should be getting them to the polls and of politicians who don’t engage them — can’t be understated, according to Cormier.

“If we don’t encourage youth to engage in society this way, then we’re setting them up to disconnect from the political realm over the next 20, 30 years, and if we want to safeguard the quality of this democracy, we need to make sure that every time someone turns 18, that an effort is being made to integrate that person into social deliberation. It’s all of society’s role to make sure that people are brought into the democratic process. Otherwise we’re slowly but surely destroying our democracy.” ■