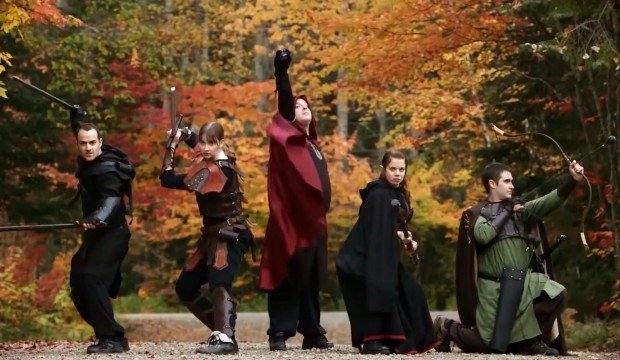 LARP (Live Action Role Play), or larping, shouldn’t be too unfamiliar to Montrealers. Every Sunday from spring to autumn, we hear the music of the tam tams coming from the Sir Étienne Cartier Monument on Mount Royal, and up in the woods beside that drumming, a group of armour-clad, sword-wielding warriors can be found participating in mock battles.

LARP is a form of role playing game (RPG) wherein participants dress up and act out their characters’ actions, which are normally guided by a gamemaster and function according to a set of pre-determined rules.

While some dismiss RPGs as ultimately nerdy, there’s no denying their popularity. Local production company Beanduck will place a spotlight on larpers when they launch their web series LARPs this month.

“I guess it started about seven years ago,” says LARPs director Julian Stamboulieh, explaining the series’ development. “I was in a relationship at the time and I’d just heard about the idea of larping—how it relates to alter egos, almost. I liked that as a potential way of talking about who we want to be or who we want to become, in a safe way.”

After coming up with the concept, Stamboulieh struggled to find the right creative partners to bring it to life. “I hadn’t yet met a team of people that I felt confident would be as enthusiastic about the project as I was,” he says. But once he and his longtime friend Ben Warner launched Beanduck productions, they were able to bring in mutual pal Jon Verrall to take another look at the project.

“He’d [Verrall] always been kind of pushing me to get this project off the ground ‘cause he loved the idea. But I guess I realized that my weakness is I’m not a very motivated writer, and he is,” says Stamboulieh. “So I said, ‘Y’know Jon, why don’t you take over the project? You write it, we’re going to work on the story together.’”

The team fleshed out the characters, originally based on Stamboulieh, his brothers and his ex, and the script evolved from there. “What’s interesting is that every character in the show has two characters. They have their real selves and they have their fictional selves. And the conflict within the show comes from trying to keep those two worlds separate and how one affects another—how issues in real life bleed into the fantasy, and vice versa. I mean, all that to say it’s a comedy, but there’s good dramatic tension in there as well,” says Stamboulieh.

The first season consists of 10 episodes, in addition to the teaser that’s currently online. And each episode ranges in length from five to seven minutes, in order to keep YouTubers’ short attention spans in check. The plan is to hopefully get more funding based on the success of the web series in order to make full half-hour episodes.

With over 35,000 views of the teaser alone, this goal may not be entirely out of reach. “The concept of the show might seem a little exclusive, but with humour we’ve tried to make it as inclusive as possible, to make sure that everyone can enjoy it,” says Stamboulieh. “We simplify the terms so everyone can follow, not just gamers.

“But the larping community online has really embraced it. I think what they really appreciate is that, for the first time, someone’s not poking fun at the larping community. You look at Big Bang Theory, everyone loves Big Bang Theory—I personally don’t, but whatever. The majority of the jokes are kind of laughing at them. And that’s a really easy approach when you’re going into something like larping, because it’s a somewhat misunderstood group of people. It’d be really easy, and it’s always happened in the past, that people just laugh at them. But we’re laughing with them. We’re laughing at the conflicts and the complications that can come from the characters. I think that they really embrace and respect that. They know that we respect it, and hopefully that translates to other people as well and makes it a little bit more enticing. I mean, who doesn’t want to pick up a long sword and put on a load of armour and fight someone?” ■

The series begins online on March 10. For more information, you can check out their Facebook or Twitter.