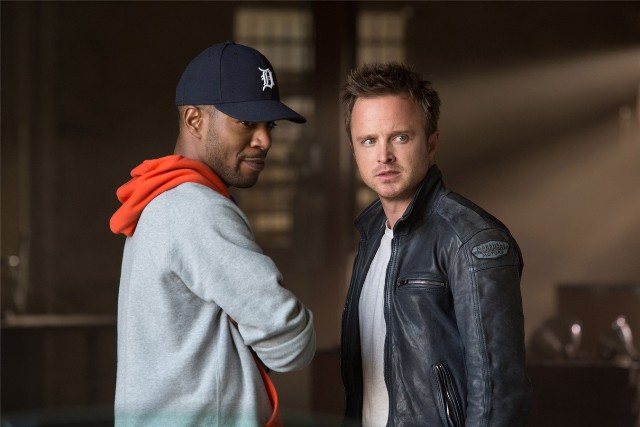 Films based on video games usually have a low chance of survival in theatres, and judging from the lousy reviews, it looked like this one was no different. I entered the Need for Speed screening without high hopes, but I’m a diehard Breaking Bad fan and I like Kid Cudi’s stoner persona as much as the next guy, so I had to at least give it a try.

Against all odds, Need for Speed was actually awesome. The film brings the suped-up dream cars and lightning speed you’d expect, but it also packs some gorgeous cinematography, genuine laughs and solid performances, even though it’s loaded with clichés.

Aaron Paul’s character is like a grown-up Jesse Pinkman. He totally holds his own as Tobey Marshall, your average James Dean-esque mechanic and racer hanging out in his hometown of rural upstate New York. As we know, the guy can act, and he brought that beautiful, raw, award-winning emotion to this role.

One of the opening scenes depicts a race that begins at the small town’s drive-in theatre, the makeshift racetrack winding along the backroads through the pines. The neon-bathed summer night scene and sublime post-rock soundtrack created a surprising atmosphere: it felt more like a nostalgic trip to The O.C. than a NOS-spewing blockbuster, and I was feeling that vibe.

Kid Cudi is hilarious as the sidekick. How has he not been in a film until now? Shit, Hollywood’s handing out roles left and right to Common, Ice Cube, even Gucci Mane.

Clearly Kid Cudi isn’t a cold-blooded gangster, but he’s great comic relief. Mini-spoiler: he doesn’t even drive in Need for Speed. He’s a wisecracking eye in the sky, acting as a for-real wingman to Paul revving up his muscle car on the ground below.

A cross-country trip for vengeance (and to win the one race to rule them all) is the main crux of the film. Imogen Poots stars as the spunky British blonde hottie who rides along, and she’s actually witty and likeable — I couldn’t help but fall in love a little by the end.

Rather than being a mere racing movie, Need for Speed becomes a road trip movie. One of the memorable scenes (and a cinematographer’s wet dream) is a high-speed chase through vast canyons in the rusty orange Nevada desert, with Poots, not Paul, behind the wheel.

Michael Keaton plays the anonymous recluse benefactor behind the mysterious big race, and his enthusiasm narrating the races over the Internet rivals that of a fanatical baseball announcer. With a deep inhale, he lovingly throws out lines like, “Love, vengeance and motor oil are all whipping together on this unforgettable day,” and compares the beauty of racing to “high art.” Award for most out-of-left-field cameo definitely goes to Mr. Keaton.

While the film’s plot points come into view a kilometre away (like the tragic death in the first act that spurs the story), it’s still a fun ride, with more substance under the hood than your average Hollywood explosionfest. No doubt Aaron Paul’s Breaking Bad fame will drive hordes of viewers like me to the theatres, and they won’t be disappointed. But you might find yourself internally finishing some of his sentences with “Mistah White!” or “Bitch!” ■