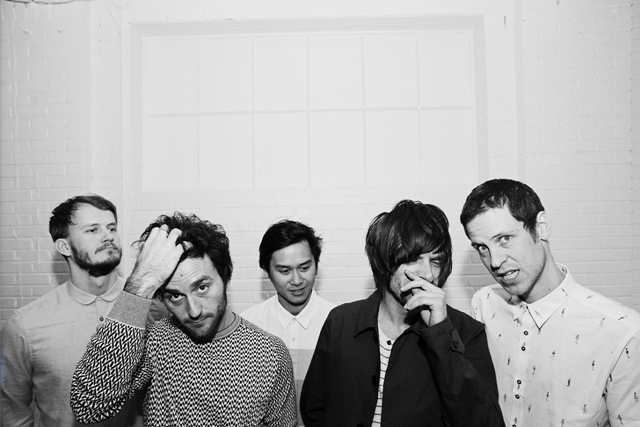 Some musicians refuse to sell out, commercialize their music or allow those tunes to be used for TV or radio product-pushing. But that’s where the members of Montreal rock troop le Trouble began their careers.

Maxime Veilleux was working at a Montreal ad company in 2012, penning jingles, his dreams of rock stardom dimming with every calculated, economically placed note. One day he took a break to cut loose, jam and improvise with his cherished guitar. Suddenly, as if magnetically drawn to the riff, in popped the head of Michael Mooney, an Australian transplant who arrived looking to make it big in Canada’s legendary music city, only to have his hopes dashed enough to force him into an advertising audition. Before he tried out for those judges, he caught wind of Veilleux’s shredding, and decided to pop into the studio he was working in to sing along.

Mooney’s vocals impressed Veilleux, and the two became fast friends. “Something about that riff spoke to me, and I just sang,” Mooney says. “After work that day we immediately went out and, over a few beers, decided to form a band.”

However, that dream was put on hold as the pair continued to pay their dues at the ad company.

“Things have changed so much in the past 10 years. You just have to wonder, where is all the money?” Mooney says, adding that an advertising gig may have kept his books balanced, but didn’t satisfy his artistic hungers. “There is creativity in ads, but it’s more like problem-solving. When you write a song, you’re not really trying to assess yourself. But when you’re doing an ad, you’re constantly thinking ‘does this sound happy enough, or sad enough?’ You’re trying to solve the problem of how to sell something, you’re not expressing yourself. But more and more people are drawn into it because there’s no money anywhere else.”

Meanwhile, in their spare time, Veilleux and Mooney continued to toy with that first tune they’d improvised together. Its melancholy riff was inspired by one of the guitarist’s recent break-ups, but Mooney was compelled by a different sense of loss.

“I was getting a sense of place and what place means. You think you’re self-contained until you go somewhere else, and people are crossing the road in a different way, or doing all sorts of things differently,” he says of his cultural adjustments after leaving Australia and attempting to settle in Montreal. “You realize that what you consider to be good and right are not from you, but from where’ you’re from.”

The song became “Fine Line,” the melancholy, jangly centerpiece of le Trouble’s debut EP, Reality Strikes. The band was rounded out by Bao-Khanh Nguyen — an intern at the ad company — and his pals Garrett Dougherty (bass) and Jesse Gnaedinger (drums). Their music’s buzz began to build online and via social networks to the point that Lava Records (which signed megastars like Lorde and Jessie J.) came calling with a record deal. Now they’re set to play this year’s Osheaga festival, and begin longer, grander tours.

It’s the career they’ve always dreamed of. Sometimes, Mooney can’t believe it all stemmed from the world of advertising.

“I don’t think either of us are like Don Draper,” Mooney says of his ad company days. He thinks that they were probably always better suited to be rock stars, rather than swanky salesmen. “We’re happier now, because it certainly wasn’t like Mad Men when we were there. Maybe we’re just not dashing enough.”  ■