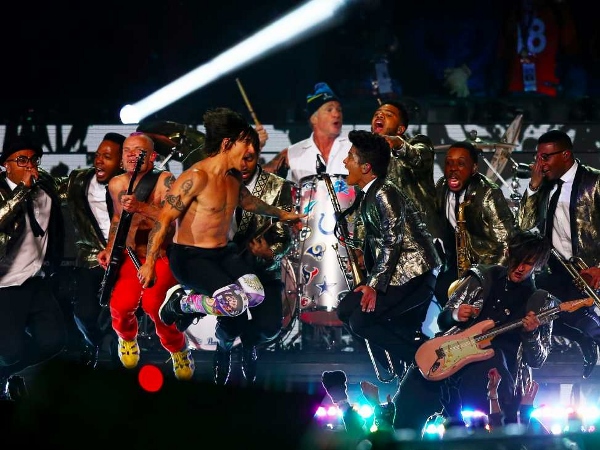 For an event that only lasted about 15 minutes, last night’s Super Bowl halftime show sure was an uneven affair, running the gamut from surprisingly enjoyable to abject shit and hitting almost every spot in between. It was basically the antithesis of the game itself, which was a thorough thrashing devoid of any suspense from start to finish.

The star of the halftime show was diminutive Little Richard/James Brown clone Bruno Mars and not some leather-faced legacy act (more on the Chili Peppers in a bit), which means this halftime show at least had some intrigue going into it. Sure enough, Mars can drum, shimmy like an old Motowner and rock a motionless pompadour, and opening song “Locked Out of Heaven” sounded more vital live compared to when it’s being used to hawk cars. Mars and his West Side Story gold-sequined backing band kept things simple, and the performance was better for it (like we need more gaudiness during the Super Bowl). Their choreographed dance was pleasant enough.

After performing the slightly more mundane single “Treasure,” Mars and company were joined by the very past due and easily parodied Red Hot Chili Peppers for a by-the-book rendition of “Give It Away,” a song that was once edgy. Whoever replaced John Frusciante on guitar was swinging wildly and looked very out of place in his many layers of baggy clothing (c’mon, you’re a Pepper now, show some skin!), and while Janet Jackson’s nipple basically caused America to implode, Anthony Kiedis’s areolas seemingly have diplomatic immunity.

Then came the requisite tribute to stars and stripes, followed by Bruno Mars American Idol-ing his way through bland wedding tune “Just the Way You Are,” a song that doesn’t really fit his new faux-funk vibe.

Also, it pains me greatly to say the reunion of Jerry Seinfeld and Jason Alexander as Jerry and George, arguing over houseguest etiquette in a booth at a renovated Tom’s Restaurant, fell flat. The dynamic duo were talking as if they had somewhere else to be: fast, and completely lacking in comedic timing. Not even an ageless Newman or Seinfeld’s ugly, overpriced kicks could save this half-assed promo for Jerry’s otherwise charming webseries.

And I’d love to tell you about the commercials, but ya know, Canada.

Oh, and this happened: