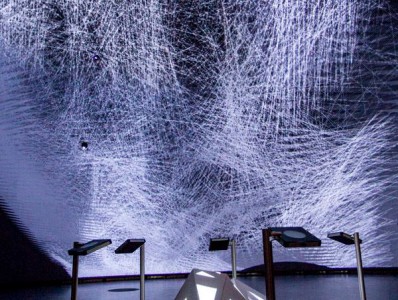 This winter, innovative French audio-visual duo Maotik and Fraction retake the SATosphere with ObE. Last spring, they debuted Dromos as part of the Mutek festival, an immersive experience based on the science of speed that the two developed over nearly four years. Asked to restage Dromos, they developed an alternate plan: to contrast the concept-heavy piece, they devised ObE, an installation that allows the audience to interact with the composition itself.

Dromos was performed live, and part of what made it appealing was the unique dynamism between a visual artist and an audio artist, plus the level of immersion the sphere provides the audience. A residency at the SAT gave Maotik and Fraction the opportunity to realize their creation in the SATosphere’s unique 20.6 surround sound system and 280° visual projection dome. The vibe is more DJ/VJ than AV installation, as audience members reclined on comfortable communal couches while the artists walked around manipulating Ableton Live and Max/MSP software from their iPads.

In such collaborations, often the audio is subordinate to the visuals, or vice versa. But that impression doesn’t hold with Maotik and Fraction’s work, as the two are perpetually reacting live to one another, controlling a variety of parameters of prepared material.

Dromos and ObE make an interesting pair. At times the interaction and the concept (speed, progress and critical theory) made the experience violent and spectacular. But compared to Dromos, ObE has a bit more fun, calling to mind friendly cyborg organisms more than crashing cars. The audience is presented with an overarching narrative structure, but they are also invited to respond to and reach within that.

ObE harkens not to a philosophy but to the audience participation it demands. In the centre of the dome floor, easily accessed from any of the long couches, sits a glowing polygon surrounded by five sensors on podiums. Operating like Theremins, the gestures of audience participants cause the audio-visual “organisms” to react. Each hand wave summons a movement from the amorphous polygon projections, the audio sample changing course as the filters and effects are altered by exploratory flourishes.

The best moments are the most claustrophobic, when simple transmutations and movements make the most impact. White parallel lines reminiscent of TV static form a tall cage around the audience. A field of pulsating blue and white lines at right angles is soothingly ecstatic. Prisms form and deconstruct, and dot matrices swirl and mutate, at one point giving the sensation of being in a room with the walls closing in. Movements seem elongated, and the restrained colour palette makes better use of the contrast, using grayscale and flat colours and shapes moving in space.

The audio is equally abstract, and it functions spatially more than melodically, often panning around the room and adding to the sense of motion conveyed by the visuals. In keeping with the organic and participatory theme of ObE, the sound feels more human than the colder Dromos. A 20-second sample of human voice grounds the piece, somehow, despite being cut up and staggered through the work.

As the 35-minute work progresses, the sounds become more spacious and organic-sounding, gradually settling into a driving series of interlocking rhythmic patterns. At the end, a scream can be heard, recorded just before the show to further emphasize the evolving nature of each projection.

The mutable, virtual aspect of Maotik and Fraction’s work, in combination with the unique capabilities of the SATosphere, yields an immersive audio-visual narrative in an impossible audio-visual space. Creating work for such a space can be a double-edged sword, risking subsequent exhibitions’ coming across as lacking or derivative. We’ll have to watch future programming to see what the next artists come up with, but ObE is a creative companion to Dromos, the culmination of Maotik and Fraction’s work at the SAT.  ■