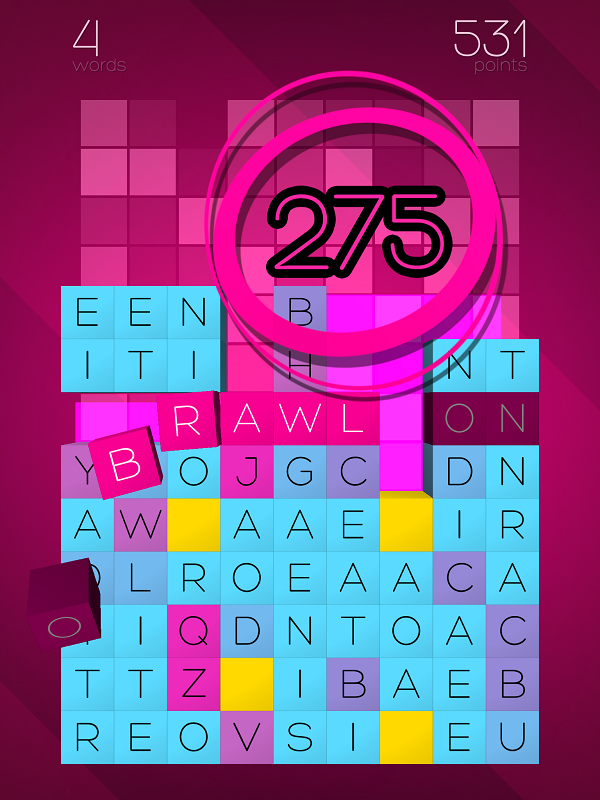 The world of casual word games for mobile devices is ultra-competitive, and the one currently leaving iOS wordsmiths spellbound is Alpha 9, created by Rosemont-based indie developer Simorobo, aka Simon Paradis-Tremblay.

Although the former EA Montreal employee (who worked on prototypes that often never saw the light of day) hasn’t done much in the way of publicizing his first solo game, Alpha 9 was given a fortuitous promotional bounce when it was unexpectedly featured on the front page of the App Store upon its release last Thursday. Since then, there’s been a steady flow of positive reviews from app reviewers who decided to drop a toonie on it.

“So far the reception has been super positive,” Paradis-Tremblay says. “I only submitted it to one website pre-release, so that’s about the worst plan you can have for promoting your game. But it’s been picked up by a bunch of websites, and for them to choose it from the hundreds of games that come out each week, that’s great.”

What likely caught the attention of dedicated Spelltower/Boggle fans was Alpha 9’s pressure cooker wall mode. Taking a page from the Tetris playbook, it’s game over if the letters hit the top of the screen, and spelling out words horizontally — by flipping the letters vertically — will cause the tiles to disappear. What players likely won’t realize when playing is Paradis-Tremblay made the game entirely by himself, including the music.

“I think word games are great for mobile,” says Paradis-Tremblay. “I found myself playing them a lot, so eventually I thought, ‘Why not make my own?’ But I also felt like a lot of word games didn’t give players enough possibilities for making words. Making really long words in Scrabble, for example, can be pretty rare. I wanted it to be easy to make longer words, but making sure it’s still a hard game.”

Like a good Montreal-based title, Alpha 9 can be played in either English or French. “It wasn’t like working on two games, but there were some tweaks that had to be made,” he says. “The letters are picked randomly, but it’s not the same ratio, because in French the letter ‘e’ is used more than in English.”

As for where he got Alpha 9’s impressive lexicon, the words were taken from various online dictionaries, and then adjustments were made.

If the game turns out to be a hit, Paradis-Tremblay might port Alpha 9 to other platforms, like Android, or add a multiplayer mode. Otherwise, since going indie four years ago he’s been working on multiple projects at once, so he might move on to something completely different.

“This is the first game of mine that’s done, but I have a few that are halfway done, which is how I think most indies do it,” he says. ■

Alpha 9 is available now on iPhone and iPad. For more information, head here.