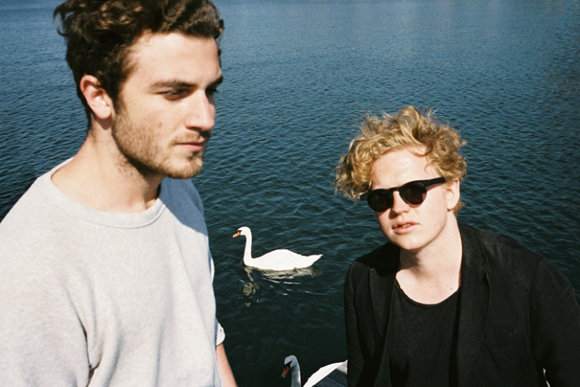 Where electro guy Nicolas Jaar and guitar dude Dave Harrington find a creamy middle is in their shared love for improvisation. Harrington started out as a member of Jaar’s live band, but following their unexpectedly potent jam sessions, they formed the more egalitarian Darkside. The duo had a big 2013: their Random Access Memories Memories remix album combined their shadowy, krautrock vibes and guitar/electronic melding tactics with Daft Punk’s hit record, while their debut long­player, Psychic, is a freaky, slow burning spacewalk.

I recently caught up with Harrington by phone in advance of their Montreal debut. We talked about jam bands, guitar heroes and not planning out their live shows.

Erik Leijon: So how’s the live show going to be different from Psychic?
Dave Harrington: Logistically, it’s just me and Nico (Jaar) facing each other, going at it with a pile of gear. Psychic is like chapter one and the live show is chapter two. Darkside really started from playing live together: things that started happening when I was playing in Nico’s band. The live environment is in a way where Darkside lives naturally. When we play live, it’s not the album — it’s the album shattered to bits, and then attempted to be put back together in front of the audience.

Depending on the night, it could splinter in any number of directions. It’s about improvising, and doing something different every night.

There was a lot of crossover between the two worlds, exemplified best by maybe Medeski Martin & Wood. I was coming from a jazz place; I grew up learning to play music by playing jazz, and that was what was on in my house. But I also saw bands like the Allman Brothers Band, when they played Beacon Theatre (in New York).

EL: Is it fair to say that when it comes to Darkside, you’re the guitar guy and Nicolas is the electronic guy?
DH: To a degree, yeah, but there’s a lot of mushy overlap, middle ground for the two of us when we’re working. Nico doesn’t play guitar, and I don’t sing. The programming is him, but we both play drums and percussion on the record, although neither of us are particularly good drummers. We also both played keyboards on the record. We each have our skillsets, and we’ll cap each other depending on what the moment is. If it needs a spacey Wurlitzer solo, that’s a Nico move, but if it needs an organ drone, that’s me. We have our own idiosyncratic things that we do in the middle ground.

EL: What sort of guitar sound were you going for on Psychic?

DH: I went with guitar tones I like, and in a way I play based on the guitarists I admire. I like very articulate guitar playing and very inarticulate guitar playing. On the articulate side, I like the session guys who played on Steely Dan records, or Bill Frisell or David Torn or Pat Metheny — jazz guys who play hybridized, fringe ideas of what jazz could be. Then on the other side, I like Fred Frith or Arto Lindsay, who use guitar more as a tool to manipulate electronics with. There are things I do, and things I don’t do. I’ll never play power chords, for example, but I love drones, and no ­wave. ■