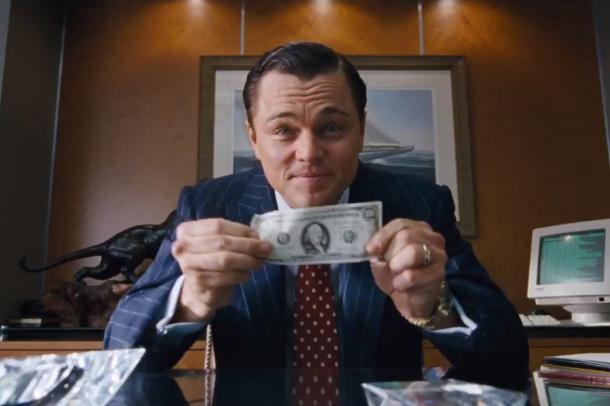 The Wolf of Wall Street

After 40 years of directing and at least half-a-dozen unquestionable masterpieces under his belt, Martin Scorsese could be forgiven for missing the mark. History has shown that the quality of most directors’ output eventually peters out, even if quantity doesn’t. Scorsese’s still going strong at 71, but what’s most surprising about his latest isn’t just that it’s great; it’s the way in which it is, a breakneck three-hour juggernaut of depravity, vulgarity and bacchanalian excess that’s both deeply ingrained in the spirit of Scorsese and atypically crass and broad. It’s the closest thing to a comedy Scorsese’s done since 1985’s After Hours, and funnier even than that high-water mark. The Wolf of Wall Street is an old man making a young man’s film and doing a bang-up job of it, to boot.

After a stock-market crash ends Jordan Belfort’s (Leonardo DiCaprio) run on Wall Street, he finds a job at a disreputable firm that trades in penny stock. His experience on the high-pressure, high-stakes world of Wall Street (and inspiration provided by his former boss, a scene-stealing, coke-snorting Matthew McConaughey) gives Belfort a knack for floundering rubes with nearly worthless stock at an obscene commission and he’s soon turning the low-rent company into a dubious-finances powerhouse. Cocaine, prostitutes and excess run free in the offices of Stratton Oakmont, a boys’ club that Belfort and his right-hand man, Donnie (Jonah Hill), run with a Quaalude-addled iron fist. As Belfort’s hunger for money grows, however, so do his problems: he’s dogged by an FBI agent (Kyle Chandler) trying to catch him for securities fraud and increasingly dependant on drugs to function, much to the displeasure of his wife, Naomi (Margot Robbie).

While this all has to potential to play like a dour rehash of Oliver Stone’s Wall Street, Scorsese and writer Terence Winter (working from the real Belfort’s book of the same title) pull out all the stops in showcasing what exactly is so good about greed in all of the gory details. I’d venture there’s about as much substance abuse happening here as in Fear and Loathing in Las Vegas, not to mention the constant orgies, the vomit, the blood and the non-stop partying (although set in the ‘80s and early ‘90s, Scorsese studiously avoids draping it in day-glo one-hit wonders and instead settles for an anachronistic mix of Chicago blues and staccato punk). It makes for some of the funniest scenes not only of the year, but of many of those actors’ career; DiCaprio in particular reveals a heretofore unknown capacity for physical comedy in a long sequence where Belfort receives terrible news just as a near-paralyzing dose of ‘ludes kicks in.

It’s a delicate balancing trick that Scorsese pulls off here, getting laughs from despicable people doing horrible things while still making a salient point about greed and excess. The Wolf of Wall Street is frequently gut-bustingly hilarious, but mostly because it’s constantly a hair away from being cripplingly depressing. In the male-dominated world of Wall Street, powerful men are misogynistic, homophobic and callous (the film opens with Belfort and his cronies in the throes of an office dwarf-tossing party). Scorsese wanders in the waters of Apatowian gay panic jokes, a risky gambit that would probably be much more off-putting if it wasn’t so clear that these are despicable shitstains. I didn’t think that Scorsese would try his hand at dick jokes and ass candles (pretty much exactly what it sounds like) this late in the game, but the unpredictable raunchiness of the film is one of its major assets. (There were several walkouts in the audience that I saw it in, so be warned: mileage may vary on your tolerance to scenes of Jonah Hill publically masturbating or DiCaprio sucking coke through a straw out of a prostitute’s butt.)

If there’s anything that can be held against The Wolf of Wall Street, it’s the way its rags-to-riches-to-rags structure so closely apes that of Scorsese’s other rollicking, compulsively watchable masterpiece Goodfellas. There are scenes that play out nearly identically here; while problems aren’t as easily solved with a bullet to the back of the head in the financial world, these guys are just as bad as the made guys in Goodfellas. Still, it’s hard to fault Scorsese for going back to what he does best — you can only watch Goodfellas so many times before you know it by heart. The Wolf of Wall Street seems destined to have a similar shelf life, albeit with significantly more nudity. ■