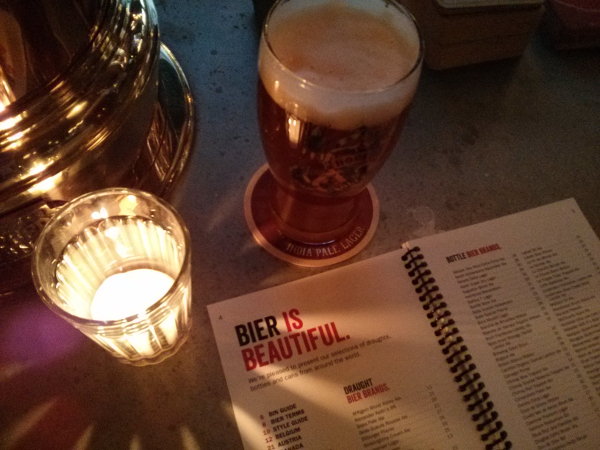 Last Thursday after work, I strolled down to Bier Markt (1221 René-Levesque W.). I was armoured against the cold by the willingness to believe, against my own grain, that it might not be just a douche bar, that I would be softened, even warmed, by the pleasures of cheap 5-à-7 oysters and a beer rarer and dearer than that which I could under normal circumstances acquire in Quebec.

I was prepared to be endeared in spite of my prejudice. But as circumstance would have it (it was Friday; it was between cinq and sept), the place was stuffed to the gills with glossy ties and tasteless suits — no table unreserved, no solitary space at either the downstairs or upstairs bar. I drank my complimentary Steigl standing and returned to the wind-whipped world outdoors.

Monday night I returned, this time differently if no less resplendently armoured in the suspicion that my earlier optimism had been a phantasm and that, in fact, the Bier Markt would be exactly the shit show that it by all rights promised to be.

To take a step or two back, Bier Markt is a big old Ontario chain modelled, in admittedly a somewhat Olive Gardenian fashion, on the historic Belgian beer hall, and indeed Bier Markt boasts a wealth of Belgian beers and a shitload of international beers, many of which you’re not otherwise going to stumble upon in Montreal. I counted 30-odd countries represented on their beer menu, with something like 40 beers on tap, and a bottle list that sprawls across a dizzying array of styles, origins and price points.

The space is cavernous, two-tiered (apparently three. I looked it up. The third one is perhaps hidden), and conspicuously gaudy — slick with the rapidly congealing afterbirth of a newly installed chain restaurant attempting to conjure the mythic grace of the (or perhaps any) old country, its brass and pounded tin crying out for the patina that they shall never accrete, or at any rate, likely shall never be allowed to accrete, and so is destined to reside in perpetuity as a Belgian beer hall chez Disney, its looming Mannekin Pis (the famous naked pissing toddler of Belgium, aka le Petit Julien) mutely proclaiming their aridity by dint of the absence of anything to piss or anywhere in which to piss save the arriving clientele, those mounting the stairs or anyone else who happened to turn around and find themselves faced with the yawning urethra of the many eight-foot stone children that populate the building.

But for all that, it was all right.

Yes, it is expensive. A cheap pint is effectively unavailable, but it does to its credit boast such gems as le Castor’s Yakima IPA, one of the driest, most coniferous and reliable India pale ales coming out of the QC microbrew scene right now ($5.74/16oz); and the grand, lauded, Rodenbach Grand Cru, a sour Flemish red with a brilliant acidity and a dark cherry depth which many years ago opened for me a door into a world of beer (well, perhaps two continents of beer) that I had not heretofore realized exists, but has since come to drive and deride so many of my own movements ($7.26/12oz). Both on tap, which is a rarity unto itself, and not something to sniff at.

So think of it this way: if you’re downtown and you want a half-decent or, God help you, a better than half-decent beer, you can certainly do worse than Bier Markt. Indeed, you cannot but do worse than Bier Markt, with the possible exception of Brutopia, which is so close, but is and shall continue to do its own thing, which I do not anticipate will be too threatened by the appearance of such an enterprise so clearly geared to a different clientele.

For true beer nerds, this will inevitably provide mixed blessings. They will have a better sense of the outrageous mark-up ($20+ for 330mL of Cantillon — wtf?), of the various other avenues by which they might acquire the same bottles (black market, grey market or otherwise), but also of the value of many of the offerings, and the sheer convenience of being able to just sit their ass down and drink that particular beer that they want to drink.

To be sure, the whole of the true American microbrew scene is grossly neglected (IPAs – American and, for that matter, Québécois or Canadian — are given startlingly short shrift, given their current vogue), but many of the international luminaries are afoot, and some of the better established QC microbrasseries (Dieu du Ciel, someone else I don’t remember) are given rotating tap presence.

So you’re downtown. Like, shitty McGill-Concordia downtown (and therefore not quite close enough to Benelux to make this a moot question). You want a (perhaps several) beer. Pace Bobby Liebling, you gotta review your choices.

Jonah Campbell is the author of Food and Trembling (Invisible Publishing, 2011), and the blog Still Crapulent After All These Years.