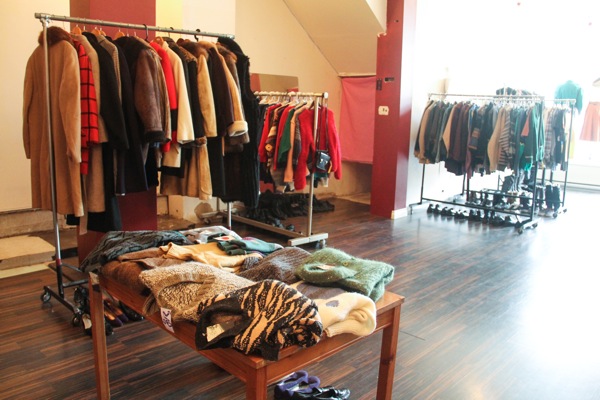 We checked in with Tessa Smith at Vintage Pop, which brings together a gang of local thrifters (plus one astrological reader) for a month-long pop-up on the Plateau, to get you set for the changing season.

Coming as a surprise to exactly nobody, Smith says the biggest sellers have been fall and winter gear, as everyone stocks up for the big freeze. She’s found that suede, fur, wool and other natural fibres are the most popular, noting that synthetics seem to have grown a bit passé and seem to get passed on. She chalks this up to street fashion’s current passion for all things grunge.

“It’s mostly stuff from the ’70s and ’80s,” she says, although she points to one vintage dealer, Soubrette, that focuses on the ’60s and another that sells relatively new stuff from as little as 15 years ago.

Sales like this are a great litmus test for what’s happening in street style, as each thrifter-vendor tailors their offerings toward the looks that define the moment. Right now, that means button-ups and blouses galore, denim everything and the re-emergence of the small ’90s backpack purse, which makes sense in a cyclist’s city like Montreal. While there were still a few patterned knits kicking around, we were both pleased to note the decline of the Cosby sweater, lagging in popularity in favour of more simple cardigans, especially for guys.

Compared to past editions of the sale, Smith’s noticed that this round has been more of a sausage party than the usual thrift sales, with way more men coming in than usual.

“Dudes have been coming in for classic cardigans, basics and button-ups, less flashy stuff. And anything that’s plaid and flannel,” she says, pointing to a thick forester’s shirt. “I had one in the window and sold three right away.”

The takeaway? Wear pretty much anything from the ’90s and people will think you’re stylish. ■