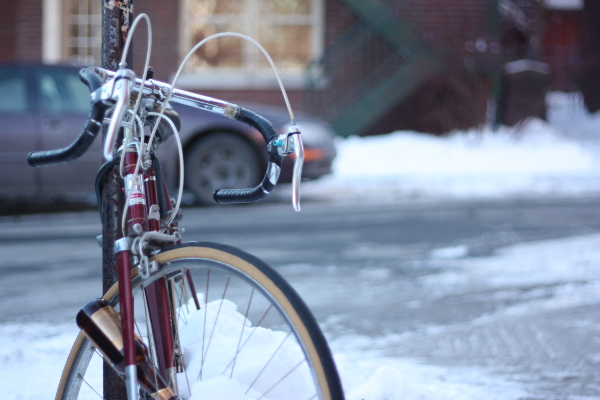 Earlier this month, the city of Montreal dealt its annual insult to the cyclist community by shutting down much of its bicycle network. Affected paths are the ones lined with the green posts. They include crucial links such as the one on Brébeuf, which carries upwards of 8,000 a day when it’s warm out. 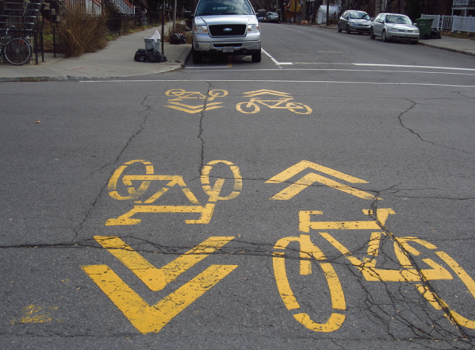 The green posts, called delineators, are removed every year on Nov. 15 and put back in after April 1. They are taken out so as not to interfere with snow removal operations in the winter. Although there has been little or no snow before mid-December in recent years, the delineators have to be out before the ground freezes. If ice were allowed to form within the delineators’ anchorages, their removal would be much more difficult and could potentially damage the surrounding asphalt. I think you would agree that it is best to avoid festooning our streets with more craters.

The two-way curbside bicycle path with green delineators is a design devised back in the 1980s. It was a quick, cheap way to implement on-street bicycle infrastructure. Back then, cycling was seen mainly as a summertime leisure activity. The original cycling network linked major parks and waterways, not population pools and employment areas. Nobody thought about the bicycle as a mode of transportation, especially not in the winter. Removing the delineators for the snowy months was a non-issue.

Today, tens of thousands of Montrealers use bicycles for transportation. Data from counters on some of the city’s bicycle paths shows that more people are cycling ever later into the fall and starting up again ever earlier in the spring, despite the disappearance of so many bicycle paths. More people, myself included, cycle all the way through the winter. In a context where governments want people to be more active and want urban transportation to be more sustainable, having large sections of the bicycle network vanish for almost five months is a problem.

Much of Montreal’s bicycle infrastructure needs to be updated, but nothing more desperately than the seasonal bicycle paths. Those green posts are the main issue: not only do they prevent winter maintenance, they are also a potential hazard to cyclists and a major nuisance to motorists parallel parking among them. Plus, being mostly crooked and mangled, they don’t exactly beautify our streets.

The simplest solution would be to just do away with the bloody things and rely only on paint to delineate the path. This is already the case on a few bicycle path segments, such as along the eastern flank of Laurier Park. It seems to work fine: despite the absence of delineators, cars do not seem to encroach into the path. But even with the posts gone, snow removal would probably still be problematic. Knowing the destruction those little snow caterpillars wreak along the sidewalks, the thought of them bombing down the gauntlet between the curb and parked cars is scary. Scratched car doors and missing mirrors would not help endear winter cycling to motorists. 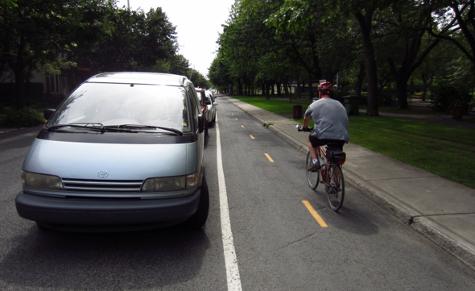 An inexpensive, alternative solution would be to convert these two-way bicycle paths to one-way bicycle lanes on either side of the street. This solution is exemplified by the recently implemented bicycle lanes on Laurier. A conversion of this type might be a tough sell to some cyclists: they would no longer be physically separated from traffic. Only a painted line would keep bicycles and moving vehicles apart, and nothing would stop cars from double parking in the bicycle lane. Nonetheless, on a residential street with a low traffic volume and speed, cyclists’ level of comfort and safety would not necessarily be compromised. Snow removal would be easier; it could be done at the same time and using the same equipment as the roadways. 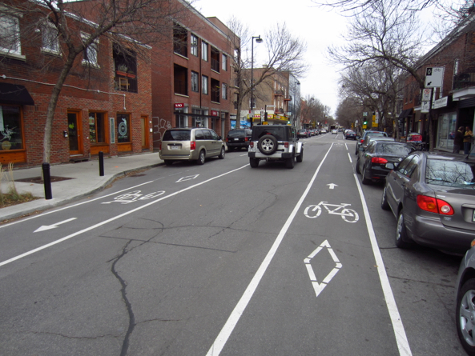 I am usable year-round.

An expensive but potentially worthwhile solution is to make the seasonal bicycle paths permanent. This can be done by building a curb or a concrete median between the path and the roadway. The bicycle path on Rachel received this treatment a year ago and, for the first time, was operated all winter. Given the high cost of building and operating such a path (it immensely complicates snow removal), this solution would be worthwhile only on busier streets, where cyclists’ comfort and safety would be greatly increased through physical segregation from vehicular traffic. 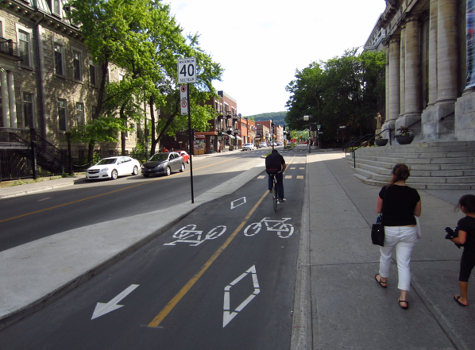 Look at me, I’m permanent!

Ultimately, the greatest obstacle to making cycling in the colder months safer and more pleasant is going to be politics. Many of our fellow citizens, especially car-loving suburbanites, are still convinced that providing any bicycle infrastructure at all is a wasteful frivolity. Getting the city to commit resources to updating bicycle paths and operating them year round will take patience and sustained pressure from organizations such as Vélo Québec and the Montreal Bike Coalition. ■