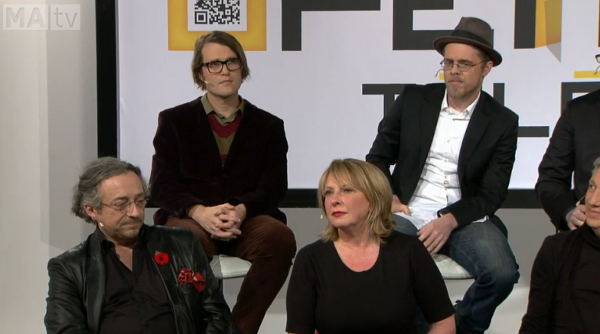 The panel, including the author (second from left)

Last week, I was invited to be on a panel discussion on MAtv, a Quebecor-owned digital cable channel. The topic of the panel was a documentary, La langue à terre, about the alleged decline of French in Quebec. I was asked to participate because of my Quebonics column in the print edition of Cult MTL, which attempts to explain Quebec slang to anglos.

I don’t have all that much to say about this supposed linguistic decline. I speak French, work in French and know lots of bilingual anglos. I don’t get why certain anglos don’t make an effort to learn French, but at the end of the day it’s their loss, and I don’t really see the need to poke at old wounds.

However, I generally try to understand where people are coming from even when we don’t agree, and my ego was just flattered enough to say yes to the offer (plus they offered a fee of $100, a not unsubstantial sum in my freelance writer’s life).

I started to have second thoughts when I looked closely at who else would be on the panel. Along with the filmmakers, Jean-Pierre Roy and Michel Breton, there was Mathieu Bock-Côté, a right-wing Quebecor columnist; Pierre Curzi, an actor-turned-PQ politician-turned-sovereignist elder statesman; and Beryl Wajsman, editor of The Suburban and éminence grise of the “angryphone” movement (and hardline Israel hawk, but we needn’t get into that right now).

Not exactly my crowd, though I would later be relieved to find that the panel also included Christine St-Pierre, a moderate former Liberal cabinet minister, and Paul Cargnello, a lefty bilingual-anglo singer-songwriter — so I wouldn’t be the only one in the line of fire.

Then I watched the doc. La langue à terre is a piece of clumsy propaganda consisting largely of old, white Québécois men grumbling about how French is being deliberately eroded by the evil English oppressors. (Interestingly, the only minority, and one of the only people under 60, in the film is Maria Mourani, who was subsequently booted out of the Bloc Québécois for opposing the Charte des valeurs.) The film demonizes anglos, federalist Québécois and sovereignists who’ve reached out across the aisle, sidetracks to accuse France of being insufficiently French (seriously) and takes it as a fait acquis that bilingualism is a stealth effort to destroy the French language.

I showed up at the TV studio in a state of acute discomfort. I was in the belly of the beast in more ways than one — an anglo in hostile territory, and a victim of Quebecor layoffs crawling back for another suck at the corporate teat.

EVOLUTION WILL NOT BE TELEVISED
I quickly realized that the panel was going to be less of a dialogue and more of a monologue competition. While waiting (largely unsuccessfully) for my turn to speak, I formed the following impressions of my co-panelists.

Pierre Curzi is a great actor. I almost cried at the end of Les invasions barbares just at a close-up of his face as he says goodbye to his dying friend. As a political thinker… he’s a great actor.

Mathieu Bock-Côté, like the verbal equivalent of a speed-metal guitarist, specializes in spouting fancily constructed phrases very fast and very loud. Ideologically, he comes from such a different place than me that we might as well live in parallel universes. It’s hard for me to address his opinions; I really don’t want to fall into the facile “separatists = fascists” trap, but when right-wingers openly sing the praises of coercive conformity and state control over individuals’ behaviour, it gives me chills, and not in a good way.

Beryl Wajsman, though he was considerably less obnoxious than I expected, used a grab bag of statistics, literary references and gotcha quotes (such as René Lévesque’s statement that the measure of a society is how it treats its minorities) to steamroller over the discussion in a rather aggressive manner. (He was clearly putting on a bit of a show; offstage, he was charming and friendly with everyone.)

Christine St-Pierre, as a federalist francophone, suffered some of the shabbiest treatment from her sovereignist colleagues. (One of the uglier sides of the independence movement is how francophones who aren’t down with the cause are blithely written off as sellouts, traitors or not real Québécois.) At one point, arguing over some obscure point of her legislative legacy, the filmmakers were so rude to her that even this panel of loudmouths was shocked into a brief moment of awkward silence.

Paul Cargnello came ready for battle and brought his own causes to the table. His big provocation was to confront the film’s thesis that the French were colonized by the English; Cargnello pointed out that both, in fact, colonized the land’s original inhabitants. Predictably, this just got people piling up on him, dismissing his argument as an irrelevant digression.

I got a few words in, talking about how I sometimes feel like no matter how much or how well I speak French, I’ll never really belong because I’m not pur laine. I also said that when I look at my anglo friends’ kids, they speak French better than their parents and speak it easily with their friends. That, not the film’s gloomy prediction of decline, is the future that I see.

If I’d been savvy (or aggressive) enough to get a few more points in, I might have talked about the hypocrisy of a certain part of the Quebec intelligentsia, who themselves are largely able to speak English but don’t want the unwashed masses to learn it; the folly of discouraging francophone immigration with projects like the Charte; or the fact that human beings in general have an immense capacity to see themselves as victims, even when they’re oppressing others. But I was too mild-mannered to get a word in edgewise. Clearly, if I ever get invited back to one of these things, I’ll have to approach it like a WWE wrestler.

After the show, Breton approached me and we wordlessly shook hands with a look that I can only describe as mutual resignation. That was going to be my take-home metaphor for the whole experience. But then two young women from the crew came up to me and Cargnello, and quietly told us (in French) that they totally agreed with us. So I was able to leave on a note of hope that we can still get along. ■