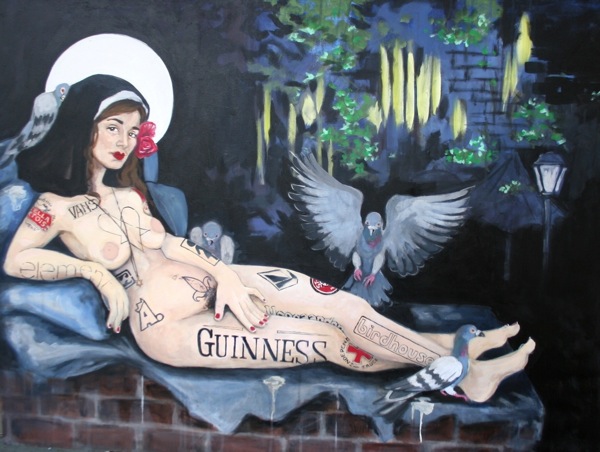 While few would describe Montreal as devout, the city is littered with symbols of its religious past, from the mountain-top cross you can spot almost anywhere on the island to the criss-cross of streets named for the saints.

City of Saints is a project that aims to bring this history into the light, asking 16 local artists to choose one of the many saints Montreal’s streets are named for and paint them, revealing something about the historical saint as well as the area around that street. Painters including Jason Botkin, Jono Doiron and Peter Ferguson each created a new work for the show.

Curator Peter Farmer says that the idea for the exhibit came from Doiron, who had recently moved to the city. “He was picking up all the nicknames, and one of them was City of Saints,” Farmer explains. “We sought out the best painters and illustrators and muralists in Montreal, or at least the more underground ones and approached them with it to have them do a saint and a street in a painting.”

Starting on All Saints Day (Nov. 2), a new image was revealed daily on the project’s website, and now the complete collection of paintings will be exhibited in the Old Port. While the theme unifies the works, the way that each artist tackled the project varied widely.

“Everyone did their own amount of research,” Farmer says, “so on the web site it shows why they chose this saint and gives you a quick run-through of all the saints.”

The patron saint of charity, Saint Elisabeth, is recast as a tattooed floozy, in a portrait that recalls both the street’s history as a red light district and its present as a home to skate shops and brew pubs. Farmer’s St-Laurent toasts the patron saint of cooking, showing the Main at its liveliest during the summer street fairs, while Mimmo Scali’s St-Dominique is executed in stencils and neon graffiti tints, no doubt a homage to the non-stop mural bombs that run the length of the street.

Together, the works point to a fresh way of thinking about Montreal, bringing together its cultural present and past. ■