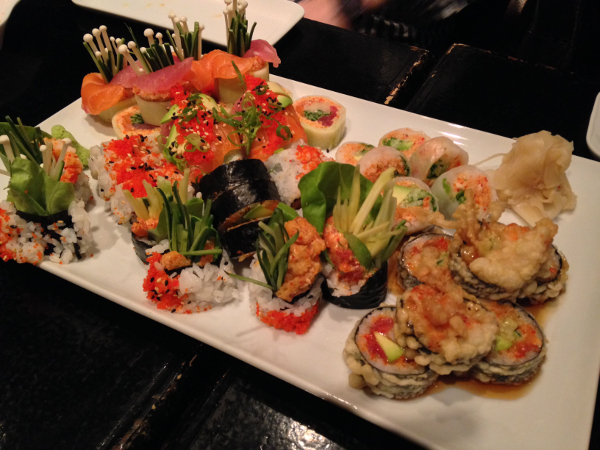 I’m a creature of habit, and I need to have my “go-to” restaurants, that place I visit when I think to myself: “I want sushi.” It’s got to be tasty, and if I’m going there often, it can’t be too pricey. Saint Sushi Bar, a new spot on Duluth, is now that place for me.

Open since February, and run by chef Saeng Outhipvongxay (a veteran of the Montreal sushi scene, having worked under the renowned Tri for many years), his vision in opening Saint was to deliver the quality and creativity of high-end sushi in a format that was accessible to all. He manages to hit his mark with a cozy restaurant that makes delicious and unique sushi served in a relaxed atmosphere with surprisingly good prices (and a surprisingly good music selection). There are many choices, but your best bet is to go with the tasting menu, which will vary depending on how many people you’re with, and run you a mere $20, tax included.

The meal started off with two sashimi — one salmon, the other tuna — served in vinaigrette made of a sake reduction and togarashi, a Japanese chili pepper. The sashimi was topped with apple slivers and green onions. The fish tasted fresh and went very well with the vinaigrette, which was absolutely delicious, with just the right level of heat. The apple slivers made for a nice contrast to the softness of the fish.

Our second course was “Christmas trees,” essentially a tartar served on a crisp rice cracker that’s shaped by hand into a mound that looks something like a tree — one of salmon, and one of lobster, and combined with tobiko (fish roe), green onion and yogurt to hold it all together. They also contained some secret ingredient that they would only tell me was the “love” they put into making it: I assume it could only be heroin, based on how much I crave it. They were delicious, and had a wonderful meaty flavour that I can’t quite put my finger on, but somehow reminded me of baked goods. The crunch and saltiness of the rice cracker worked well with the tartar. For me, this was definitely the highlight of the meal.

Our third and last course was a plate of maki sushi rolls. Named for the musicians that the restaurant’s owners liked while growing up, the rolls have monikers like “The Beatles Maki” and “The Tupac Maki” — but let’s not forget “The Michael Jackson Maki,” which is black on the inside from the seaweed and white on the outside from the fried tempura batter. The sushi was too diverse to fully describe, but they were delicious and creative, with each roll having a very different look and feel to it.

Bottom line: it may not be the best sushi in the city, but it’s right up there at the top, and at less than half the price of the other restaurants in its class, this is a must-try for any sushi fan. I’ll be back soon because I’m jonesing for more of those Christmas trees. ■