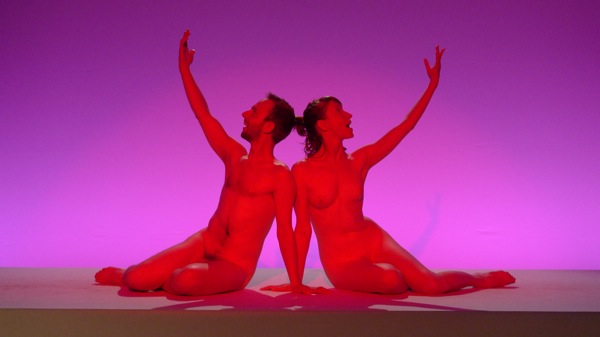 Feeling a bit adventurous? Then head over to Usine C for the North American premiere of Running Sushi, a dance show with the meandering free spirit of a Choose Your Own Adventure novel sprinkled with a manga vibe.

Austrian-based choreographer Chris Haring explains that in 2006 there were deluge of conveyor belt sushi bars popping up in Vienna, which gave him the idea to harness that feeling of randomness in a choreography. The duet has been touring since its creation and has won a prestigious Lion d’Or prize at the Venice Biennale. His company Liquid Loft, which aims to place contemporary dance in different artistic contexts, makes its Montreal debut this week.

In this show built around unpredictability, Haring describes its basic structure as “a man and woman in a manga-like household are sent off on a sushi plate and presented with some problems to solve.”

Divided into 12 chapters, the performance order depends on…well, don’t want to give everything away, but let’s just say a sushi platter and the audience inadvertently shape the story board. Haring says each chapter lasts between two and six minutes and “the scenes are more like pictures at an exhibition.”

“We were inspired by Japanese manga culture and took that clear and simple language and put it on stage.” The atmosphere echoes the form with its colourful characters and slightly quirky feel. Haring adds, “The couple’s relationship is super abstract, like a relationship on the Internet.”

The dancers perform the entire piece in an area that measures two by five metres, which echoes a comic’s single panel frame. “It’s not like you’re taking away the space. You’re reducing it,” explains Haring. “It’s like you’re looking through a magnifying glass and making the body look clearer.”

Haring values simplicity, which is exactly what drew him to study contemporary dance when he was in his 20s. “You can just create something out of nothing. You just need your body, and then do something with it.” ■