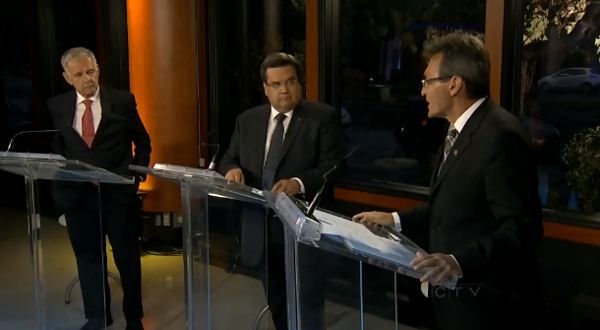 If polls are to be believed — and they probably shouldn’t be at this point, otherwise we’d have different premiers in Alberta and B.C., and not so many NDP seats in Quebec — then Denis Coderre should feel pretty confident about being elected the next mayor of Montreal on Nov. 3. The first mayoral poll, done by Léger Marketing, puts the former Liberal MP comfortably in front, with 39 per cent of intended voters saying they’ll vote for him, and places Projet Montreal’s Richard Bergeron in second, with 23 per cent of the vote.

We’re only a couple of days removed from the spirited but cluttered CTV anglo debate, and there are more debates to come, so there’s still plenty of time for Bergeron, Marcel Côté and Mélanie Joly (who, after she wasn’t invited to the CTV debate, will get her chance to duke it out with the three dudes during Wednesday’s Rad-Can debate) to sway the undecided, but at this point, will Coderre’s brand recognition be enough to ensure him victory?

However you might feel about Coderre and the other candidates, there’s no doubt a painless, easy election win does Montreal little good. We want our city’s best and brightest knocking each other over for the chance to rebuild city hall’s image, so Coderre crushing his foes on his name and tweeting prowess alone isn’t the ideal way to begin restoring our confidence in municipal politics.

How can the other candidates cut away at Coderre’s lead? In theory, it’s quite simple: Bergeron’s got his base, but needs to convince outliers to give him a shot; Côté needs to better explain to voters why he wants the gig and to stop looking slightly disinterested; and Joly (who might get a bit of a bump now that she’s not considered a fringe candidate anymore) needs some names to back her up.

Montreal should be rooting for these three to claw their way back into the race for the big chair. Chipping away at Coderre’s lack of substantive policies is an obvious start, but they also need to prove to voters that they have the stature and appeal to lead a cosmopolitan city, because as Coderre’s popularity has demonstrated thus far, that matters, too. ■