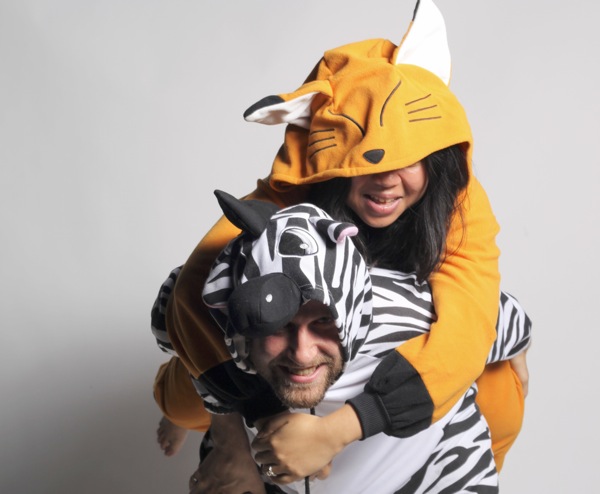 Maria Pham-Beaupré and her husband Marc Beaupré-Pham in their kigurumis.

You may have seen them at Igloofest or Montreal ComicCon — if not, you’ll surely spot them soon out on the streets for Halloween: kigurumis, Japanese animal onesie pyjamas for grown-ups, have landed in Montreal.

Kigurumis originate from Japanese street style —  think Harajuku-style fashion experimentation — and range from real animals to Sanrio or Pixar characters to fantasy animals like unicorns and dragons. They distinguish themselves from the “furry” subculture, in which animal costumes are highly personalized and often involve role-playing of both a sexual and non-sexual nature.

Kigurumi.ca, co-owned by Montrealers Maria Pham-Beaupré and her husband Marc Beaupré-Pham, both 25, imports authentic kigurumis from Japan and distributes them for children and adults. Maria originally started the website two years ago as a means of simplifying the garments’ distribution for a small group of friends who were interested in them, and the business has expanded from there.

“It was never my plan to be doing this full-time. I had no business background, but it’s been so much fun. Sometimes it can feel kind of isolating,” Maria explains. “The thought of sending these crazy pyjamas out into the world and making people feel happy makes me happy.”

This fall, the couple graciously offered to lend my friends and I a few pairs for one magical night of partying, like fairy godmothers to a pack of drunken Cinderellas. We began by heading to their office/apartment on St-Laurent just south of St-Viateur. We perused the long rack of options, resulting in a motley crew made up of a panda, duck, giraffe, skeleton, frog, cat, bear and dinosaur. We each faced the personal crossroads of whether or not to go nude under the onesie, a choice that divided us 50/50. After playing around, sending some jealousy-inducing snapchats and thoroughly enjoying the hilarity of the excessively low crotch, we hit the streets.

Wearing a full body animal onesie out in public is an interesting social experiment. The minute you put it on, you must accept setting aside whatever pride you may have. You are now a life-size duck, and that is your reality. It is something of a practice in ego loss — one many of us found that night to be quite liberating.

Maria admitted that she considers herself to be a fairly inhibited person generally, but when she puts on a kigurumi, suddenly all bets are off. You’re already a duck — what else could you possibly do to make someone judge you? A member of our crew felt like she had never danced better in her life than in a kigurumi, perhaps due to the freedom of movement combined with that aforementioned loss of inhibition — she was also one of the crew who had chosen to go nude. As one of the never-nudes, I found my terry-cloth panda suit to be slowly, albeit adorably, suffocating me to death by the end of the night. If you’re going to be a in a crowded space, especially with the fleece kigurumis, it’s nude or bust.

Beyond the liberating effects, wearing a kigurumi also broke down barriers between strangers on the street and in the club. It made me a little sad to think that it takes a costume for strangers to engage each other and it made me consider the level of insularity I experience, and cultivate, going out in the city on any given night. ■

Look out for Maria, Marc & co. at their next event, a Kigurumi Bass Drive night in collaboration with DJ Vilify on Jan. 8