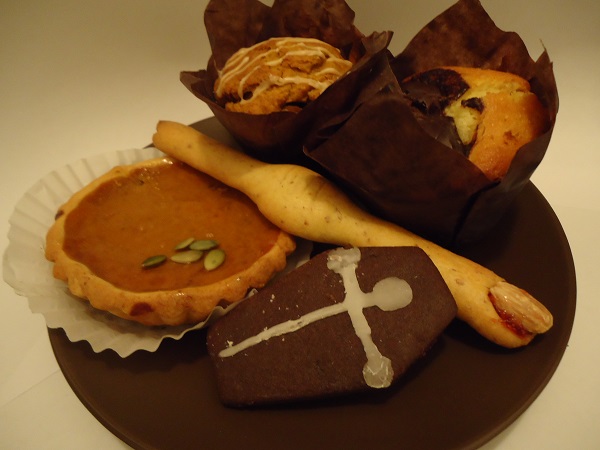 My culinary expertise is somewhat limited — what can I say? I’m no Szef Bartek — but when we’re talking baked goods, I would indeed consider myself a connoisseur. It is rare that a day floats by without me acquiring some sort of tasty confection to accompany an otherwise lonely and lacklustre hot beverage.

Halloween is less than a week away, which to the sweet-toothed signals one major shift in our regime: the ubiquity of all things pumpkin-spiced. With this in mind, I made my way to the Van Horne location of Mamie Clafoutis to pick up some Halloween and fall-flavoured treats.

As I’d never visited the small local chain before, I wasn’t entirely sure whether to grab a number or not (to be served), but as I was the only customer in the shop, I decided to simply ask to be directed to their Halloween pastries. And not to get too anglo vs. franco on you, but I was annoyed at the service I received. They gave me the “you’re a douche” face for speaking English and then didn’t accept my French when I requested a “dwah duh sore-see-air” (doigt de sorcière). Feeling all kinds of awkward, I quickly selected five seasonal items via hand signals, whistles and tongue clicks and scooched out the door.

Once I arrived home, I arranged my sweet delights on an appropriately fall-coloured mahogany serving platter (ie. brown Ikea plate), and chose my first victim.

I started out with the chocolate headstone cookie. The small three-bite biscuit came in several shapes — in retrospect, I think I would have enjoyed the vampire bat a bit more due to the icing-to-cookie ratio. Lesson learned. It was surprisingly moist, but much like a Christmas gingerbread house, the accoutrements were more exciting. Think of it as a vehicle to enjoy eating icing.

Next I tried the troublesome witch’s finger. I hadn’t seen one of these since I was a kid, and it was my favourite of the five. The almond-flavoured shortbread was perfect — not too sweet or dry and appropriately festive. It made the trip worth it.

The mini pumpkin pie was mediocre. It lacked that homemade flaky pie crust crispness. The result was an overly moist attempt that felt manufactured and store-bought, not bakery fresh. The filling was decent but hard to focus on when the crust was so disappointing.

The pumpkin-flavoured muffin was the worst of the bunch. In a world where I can acquire a cream cheese filled, toasted pumpkin seed topped muffin from several mainstream coffee chains, I expected them to up their game here. What you get is a dry, almost too fragrantly spiced muffin that I never finished. It was terrible. Avoid.

Their orange and chocolate muffin wasn’t as bad, but it’s one I’d also suggest avoiding. There’s too much candied orange strewn throughout the batter, giving it an unpleasant chewy texture. The chocolate centre and topping is a nice dark chocolate, but the flavour didn’t mesh well with super-sugary sweetness of the candied orange pellets assaulting my taste buds.

These of course aren’t regular items on the Mamie Clafoutis menu, so I won’t tar the entire chain with this festive fail. But I’m getting the feeling that maybe it’s a good thing that pumpkin-flavoured goodies only appear once a year. ■