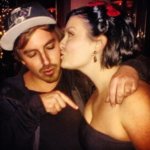 Friday night at CMJ was a work night for me. M for Montreal presented nine bands at Arlene’s Grocery on the Lower East Side, where the courteous staff fuelled me from 5 p.m. till closing. Imagine how great I looked at 3 a.m. Hell.

We kicked things off with our traditional free poutine happy hour, brought to us by NYC’s Mile End Catering. It’s the real deal. There are a couple of spots in New York serving Montreal poutine, and it’s getting some hype. French act Violett Pi hit the stage early. These guys remind me of Flaming Lips but with a punk rock attitude. They were followed by Quebec City rapper Webster, who praised NYC by giving mad props to the city that gave birth to rap, saying he’s proud to be part of the game (en français).

Look out, people — the following two acts are fronted by women that are in it to kill it. They’re some of MTL’s most promising artists: Foxtrott and A K U A. Foxtrott, accompanied by Pietro of the Luyas, delivered electronic beats layered with French horn on crack and a voice made of gold. Foxtrott’s been playing around but this is her time, right now, and she is here to stay. A K U A’s been doing back-up vocals for Solange and has been teaming up with Andy of Twin Shadow. Forget the cred — she’s got soul and all the goods that come with it. Her next record might just be the soundtrack to sexual foreplay.

Next, Kandle seduced us all with her music and bombshell beauty. Everything started to feel like a Quentin Tarantino movie. Most of you might also know her guitar player is Sammy Goldberg of the Yardlets and Broken Social Scene, and that just adds even more kick to the spice.

Soon after was Yamantaka // Sonic Titan. They’re more than just a live band — they’re cinematic. It’s a purifying experience. I feel like they called on spirits from three different continents and that got me down to my knees, in the restroom, asking God/Allah/Buddha for strength to not text my ex — that didn’t work. This band is heavy and original and a force to reckon with. Later that night, I fell asleep hearing their chants and drums in the back of my skull.

Montreal’s Camp were there to brighten things up. This new band features Karneef, along with members of TOPS & Pat Jordache. I remember them being a lot more yacht rocky when we presented them at Cult MTL’s one-year anniversary this summer. A couple months later, they won me over with their tight pop, catchy hooks and Ariel Pink vibes. They never overdo it and keep it simple and fun. I would love to watch them play in fluorescent speedos by a pool with a huge cock/tail.

TOPS, Pat Jordache and Solar Year closed the night, and I couldn’t ask for anything more. TOPS flowered us with love, Pat Jordache brought the proggy grooves & Solar Year left us hugging our slanted neighbours.

Overall, the so-called Montreal spirit was very much alive and kicking in the Big Apple. I’ve seen these bands many times, but this was better than back home. They reprezented hella hard and reminded me why our city’s just as cool as New York. Vive le Québec, cowlisse.

Read part 1 of this report here