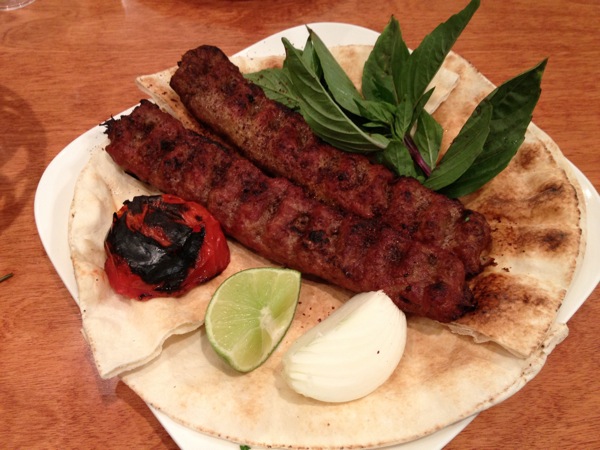 Château Amoo Jamal has long had a presence in NDG, but the small Persian restaurant recently migrated east, setting up shop on a tony stretch of Sherbrooke near Concordia (the original location now houses a satellite, Colbeh Amoo Jean). The family-run business offers a solid selection of Iranian classics, like kefta, tah-chin and, of course, kebabs.

It was far too cold and rainy to sit on the sweet sunken terrasse, unfortunately, so we settled into the restaurant’s dining room, which was lit up like a football stadium. A large TV screened Food Network shows, and kitschy homeland souvenirs crowded the walls of what must be the most brightly lit restaurant in the city — as with many Middle Eastern eateries, you’re probably not in it for the atmosphere. But at nearly 10 p.m. on a weeknight, the restaurant was packed, and ours was the only table in the house not speaking Farsi.

The menu is fairly limited, with only 10 to 15 options (including two weekend-only dishes), all in the $8 to $15 range. Each item is illustrated with a snapshot, and ordering took awhile because every dish pictured was tempting. After much deliberation, we started with chicken bandari, a spicy stew, and tah-chin, a kind of savoury stuffed rice cake. 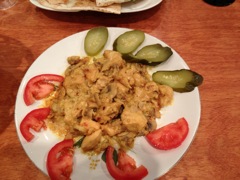 The bandari came in a thick yellowish heap, garnished with sliced pickle and fresh tomato and served with a hot ciabatta. The mix of of chicken, mushroom and cheese, laced with turmeric and chili for a surprisingly spicy kick, was delicious, although its grainy texture was a little odd, though not unpleasant.

The tah-chin was also a hit — bits of lamb stuffed into a sort of rice patty with a crispy exterior. Served like a slice of pie, the saffron-heavy rice, yogurt and seasoned lamb inside had a nuanced flavour, beautifully presented topped with sliced almonds and pistachios.

This was followed by a round of kebabs, lamb and non-o-kebab, a minced beef. They arrived on platters, with generous brochettes served on a base of warm pita alongside a char-grilled half-tomato, wedges of fresh onion and lime, and a mound of basil leaves.

Middle Eastern cuisine owns grilled meat, in my humble opinion, and Château Amoo Jamal doesn’t disappoint. The lamb was tender and juicy, fragrant with a subtle blend of spices dominated by a sumac rub. The non-o-kebab had an almost sausage-like texture, and its dense minced meat paired perfectly with the accompanying tomato and basil.

Everything we ate was delicious, so much so that we barely noticed the glaring lights and vaguely makeshift table set-up. While the atmosphere is a far cry from the dim romance most restaurants aim for, the loud Farsi chatter from surrounding tables made the space feel lively, and was a testament to the food’s authenticity. For the quantity, quality and price point of their amazing food, Château Amoo Jamal may just be one of the best deals in the city. ■